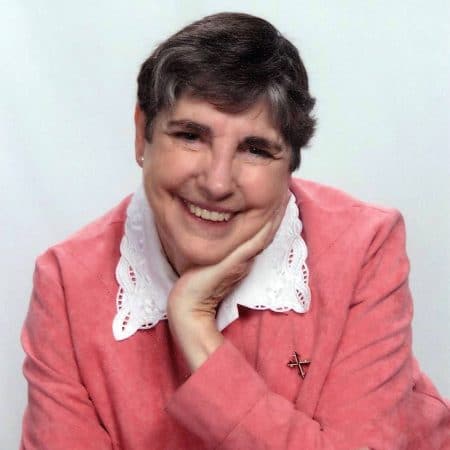 Sister Lynne was a person who said and did things in her own way. She once wrote, “Everything takes time and energy – community is no exception. The result is a genuine wonder and respect for the giftedness and uniqueness of each of these funny, fractured, human creatures we call Grand Rapids Dominicans.”

Born on September 26, 1943 she was baptized Patricia Jean two weeks later. The youngest of three children she was raised in the beautiful lakeside town of Ludington by her mother and beloved grandfather. She describes her childhood as a difficult one as her mother worked long hours to support the family as a single parent, and she was often left to manage on her own. One cherished memory she recalls was that of her relationship with her grandfather. On their early morning fishing trips to the harbor, he taught her about solitude and being in the presence of God. In the quiet beauty of the sunrise and the seagulls he would say: “That’s God.” Later, Sr. Lynne reflected: “How could there be a better way to see God than in the majestic, quiet beauty of nature and the loving qualities of my Grampa?”

When she was seven years old she was badly burned and spent many months in Mary Free Bed Hospital in Grand Rapids. She missed her family members who were unable to visit as they had no transportation. When she returned home, she recalls that she was able to catch up with the other children in the second semester of the third grade and she relished the opportunity to have fun again.

Following high school graduation Patricia worked in a local real estate/insurance office. Then she enlisted in the U.S. Navy where she was assigned secretarial work. She recalls the tense time of the Cuban Missile crisis. After her discharge she briefly worked as a nurse’s aide.

At the age of 21, Patricia decided to dedicate her life to God by taking private vows but was encouraged by a priest friend to join a convent instead. Her cousin Jackie suggested the Grand Rapids Dominicans, who were fun-loving – they even threw snowballs!

In September 1964, Patricia entered the Dominican Sisters at Marywood. At reception she became Sister Mary Lynne of Our Mother of Perpetual Help. About halfway into her novitiate year she contracted tuberculosis and was hospitalized for ten months – thus invalidating her canonical novitiate year. Upon her recovery, she asked Sister Aquinas about reentering, never expecting her to say yes. She began another novitiate and took her first vows on November 30, 1968. Subsequently, she earned a B.A. in Social Sciences and M.A. in Religious Studies from Aquinas College.

Sister Lynne taught the early grades throughout Michigan including St. Stephen, Grand Rapids; SS. Peter & Paul, Saginaw; St. Alfred, Taylor; St. Basil, South Haven; Beaver Island; and St. Thomas, Grand Rapids. “My children learned to read, write, add and subtract, tie their shoes, get along with each other and to know that God loved them no matter what happened.”

Throughout her life Lynn struggled with depression. She worked hard to overcome both emotional and physical pain that never completely left her. She accepted ongoing counseling and residential treatment through the decades. Eventually, struggling with fatigue and health-related issues, she retired from teaching but not from ministry.

During her last years, she volunteered her services as she was able both on campus as a receptionist and as a driver/companion for the Sisters; and off campus, as a clinical technologist at Kent County Health Department and in the supplemental nutrition program known as WIC.

Lynne enjoyed travel and had an extensive “bucket list” of places to visit. She found the Lands of Dominic pilgrimage to be memorable as well as a trip to Lourdes. She visited the Grand Canyon, the city of Paris, France and the Super Bowl in Pasadena, California, to name a few.

Lynne enjoyed nature’s gifts in all forms and was especially drawn to the care of cats, happily caring for abandoned ones at Crash’s Landing where she was a greatly appreciated volunteer.

She once wrote: “The most important aspect of my Dominican life is the sense of bondedness through shared prayer, shared histories, shared laughter, and tears.” She concluded: “If I were to sum it all up in my own words, I would say that I did my best. I gained a wonderful, loving community who truly became my family. I love each one very much and I feel very blessed.”

Sister Lynne died unexpectedly just before the quiet beauty of the sunrise that she recalls with equanimity in her early years. She now rests in the merciful heart and infinite love of God’s gentle embrace.

Sister Lynne is survived by her sister Carol Lomonaco of Wyoming, Michigan; her brother David (Letty) Hansen of Wetumpka, Alabama; nieces, nephews, many friends and a loving community.

We commend Sister Lynne to your prayers.

Pray for women and children of abuse

Sister Lynne painting Dominican Crosses to be blessed and hung in the patient rooms at Marywood Health Center.

Sisters Lynne Hansen and Julia Nellett are part of the Sisters Car Care and Transportation Ministries.

Sr. Lynne pictured with her grandfather at her reception in 1965.

On their early morning fishing trips to the harbor, he taught her about solitude and being in the presence of God. In the quiet beauty of the sunrise and the seagulls he would say: “That’s God.” Later, Sr. Lynne reflected: “How could there be a better way to see God than in the majestic, quiet beauty of nature and the loving qualities of my Grampa?”