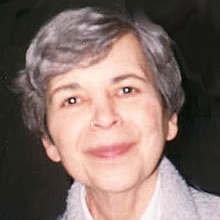 Quiet, unassuming, and loyal (she was well named), Sister Loyola Maestas served the Congregation and the Church in a variety of ministries, always remaining devoted to her family, friends, and Hispanic culture.

She was born in Santa Cruz, New Mexico, December 23, 1926, the second child of Phil and Eloisa Galvez Maestas. Her earliest memories were of her grandmother, who made her home with them. Her father taught in a public school miles from home and her mother spent much time with him. Although her mother’s health was poor, she desired a large family and against the advice of doctors gave birth to four more children.

Loyola and her older brother Phil began their education in their father’s school, but soon moved back to Santa Cruz to attend the “Sisters’ school” there. She found school work easy, but instead of taking credit for her success she admired her classmates who had to work hard to learn. She also admired the Sisters, especially Sister Seraphine Wendling, who finally convinced her that God was calling her.

During Loyola’s junior year in high school she prayed “for and against a religious vocation. I wanted to do God’s will, but often I tried to make Him change His will.” In May she was still undecided until an accident at a school picnic settled the matter. She was the only victim. During a week at home and then a two week hospital stay she had plenty of time to think and pray (like another Loyola – Ignatius). “It was God speaking to me. A car, nice clothes, trips meant nothing. I loved my family but the love for God would only make that family tie purer.” So she took farewell of family and relatives to travel across the country to Grand Rapids.

On August 28 she left with Virginia Vigil and Sister Ann Perpetua. At the end of the trip they arrived at Marywood at midnight, to be greeted by Sister Felix. Her parents and grandparents were happy at her choice. Not so her six-year-old brother, who wrote her a letter (with assistance) begging her to quit being a Sister and come home, saying he could not stand it any longer. “I decided to listen to God’s call and I survived the separation.” Loyola was impressed when three postulants, Sisters Aquinas, Maurita, and Jordan, received the habit. Her own postulant days were not easy but she was happy and kept up a lasting friendship with Sister Lenora. On March 13, 1945, Mother Euphrasia Sullivan gave her the religious habit and the name, Sister Mary Loyola of Our Lady of Sorrows. Her mother and sister Lucille came to Marywood for this occasion. Her canonical year under Sister Frances Ann was “blissful.” After profession a year later she remained in the novitiate and attended Aquinas College.

Then began a period of 15 years as a teacher in elementary schools, two years at St. Stephen, Grand Rapids; eight at St. Michael, Maple Grove; and five at St. Boniface, Bay City. Between 1962 and 1975, Sister Loyola was engaged in study and teaching Spanish. She earned her Master’s and Doctor’s degrees in Romance Languages and Literature from the University of Missouri in Columbia, Missouri. During the summers she moved to Kansas City and taught Spanish to Peace Corps workers. While researching her doctoral dissertation she spent time in Spain. She taught in the Spanish department at Aquinas College a total of seven years.

In 1975 a new phase of ministry began. She served in the publications and research office at the Mexican American Cultural Center in San Antonio, Texas. Her responsibilities included editing, proofreading, and translating. She worked on a bilingual Lectionary and an adaptation of the Spanish Bible into a more simple Latin American version geared to the Spanish-speaking people of the United States. She also taught Spanish classes on a part-time basis for the Language Institute.

In 1981, Loyola moved to Albuquerque, New Mexico, maintaining her position of editor in the Publications Department of MAAC and acting as assistant to the director of communication/ media for the Archdiocese of Santa Fe. The following year she spent studying in Spain and on her return became Archivist for the archdiocese. In 1986 she responded to an invitation to work with the migrant Hispanic population of the Pacific Northwest. Here she had the opportunity to share her pastoral studies and experience at the Mexican American Cultural Center. After a year as coordinator of the Northwest Hispanic Pastoral Institute in Yakima, Washington she returned to home territory as coordinator of religious education for Sacred Heart Parish, Espanola. Failing health caused her to return to Marywood in 1994 and later to Aquinata Hall.

Wherever she went, Loyola (known familiarly as “La”) made lasting friendships. She was a “private” person but had a zest for living. An excellent seamstress, she made clothes for herself and others. She did some beautiful pieces of counted cross-stitch, including pieces based on patterns from Fra Angelico’s angels.

After years of quiet, efficient, smiling loyalty to God’s call in Congregational ministries, in service to the church, and in retirement, Sister Loyola answered the final call in November of the Year of Jubilee. Vaya con Dios, Hermana. Que descanse en paz.

Sister Loyola is survived by her mother Mrs. Eloisa Maestas; her sisters Lucille Bustos of Georgetown, Texas; Rose Marie and Jake Archuleta of Espanola, New Mexico and her brothers Gerald and Elizabeth Maestas and Frank and Lucy Maestas of Espanola, New Mexico, many nieces and nephews, friends and a loving community.

We commend Sister Loyola to your prayers.