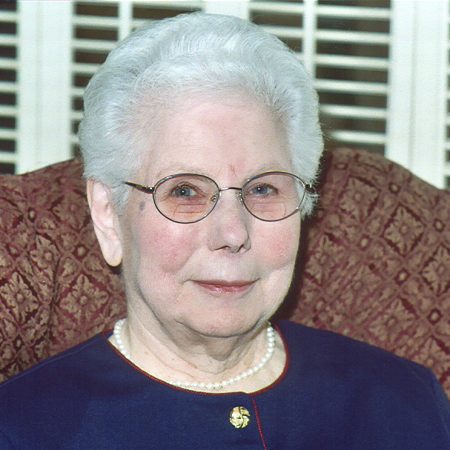 “For all that has been - thanks. For all that will be – yes.” A favorite prayer of Sr. Lenora's by Dag Hammarskjold

One of Lenora Carmody’s favorite scripture passages was the story of Elijah not finding God in the wind, the earthquake or the fire but “in a tiny whispering sound.” Lenora resonated well with Elijah’s experience.

Lenora began life on February 24, 1925 in Petoskey, the daughter of William and Catherine Dean Carmody. Her only sibling, Francis, was almost two years older than she. When Lenora was only seven- months old her mother died of leukemia. Her father mourned her deeply, but realizing that the children needed a mother, he married Marie Philipp who was a teacher in Harbor Springs.

By the time Lenora was old enough for school, the family moved to Traverse City, where she attended St. Francis School and was taught by the Grand Rapids Dominicans. In the first grade, as a result of having a mother who was a teacher and a precocious older brother, she was advanced enough that Sister Magdalen wanted to move her to the second grade. Her mother thought she was too young for that, so Sister Magdalen told her that she could be her “helper.” What a great way to begin school!

The sisters would often speak to Lenora about becoming a sister, and although she was very fond of the Grand Rapids Dominicans, these remarks were not always appreciated. At the same time she was experiencing something that she felt was a call from God to enter religious life. She resisted this call as long as she could and then gave in and made plans to join the Dominican Sisters. She was reminded of the words of C.S. Lewis who said that he entered the church “kicking and screaming.”

After graduating from high school, Lenora worked at Montgomery Ward for a year as head of the time-payment office. She found this to be a valuable experience. On September 8, 1944 she entered the Congregation. At reception she took the name of Sister Mary Cyril after one of her great aunts in the Mercy Sisters Congregation. Soon she was teaching seventh and eighth graders, a ministry which she loved.

On February 4, 1953, Lenora received a phone call from her Dad saying that her brother, an Air Force pilot, had been shot down over North Korea. He was listed as “missing-in-action.” It was the saddest day of her life. She was haunted for years by the possibility of his being a prisoner-of-war in North Korea. His body was never found and he is still on the MIA list.

After completing her undergraduate work at Aquinas College Lenora received a National Science Foundation grant to earn a Master’s Degree in Mathematics from the University of Illinois. Here she became involved in The New Math Project. After a year of teaching math at Grand Rapids Catholic
Central and a year as principal of Marywood Academy, she was asked to join the mathematics department at Aquinas College. In addition to her regular teaching load in the department, she offered evening non-credit courses in the New Math for parents and conducted workshops in the New Math for school districts in the Greater Grand Rapids area. Thus she earned the title of Sister New Math.

A new stage in her life began when she was given a three-year leave from Aquinas College to earn a PhD in Mathematics Education at The Ohio State University. She was also a teaching assistant in the Mathematics Department there. Convinced that the research of Jean Piaget in child development was at least a partial answer to why many children had trouble learning mathematics, she did her doctoral dissertation on the implications of his theories for the learning of mathematics. She returned to Aquinas College with a renewed sense of mission. The theories of Piaget augmented the New Math as topics for lectures and workshops. What a joy it was for her to learn that Sister Teresa Houlihan, who taught in the Philosophy Department at Aquinas College, had also done her dissertation on a topic related to Piaget. They became a team, and lectured together for several years convinced that Piaget’s theories could have a positive influence on the teaching and learning of children.

In 1974 on a grant from the Kellogg Foundation Lenora spent a semester at the University of Georgia teaching a graduate course in math education and doing research. She then went to England to observe teachers using the Nuffield Project in Mathematics, a program developed with the assistance of researchers who had studied under Piaget in Geneva.

Teaching turned into academic administration for Sister Lenora in 1980, when she became the Dean of Instruction and Academic Programs. The job description was extensive, but Lenora focused her attention on the quality of the General Education Program. This emphasis assured that students were receiving a Liberal Arts education even though many majored in Accounting or Business Administration. The position of Academic Vice President became vacant in 1988, and Lenora was asked to assume this position on an interim basis, which she did for a year in addition to her previous responsibilities. When a new Academic Vice President was hired, Sister Lenora deemed it the right time to retire. This she did with many fond memories of Aquinas College.

After Aquinas came a year in a Sabbatical Program at the University of San Diego, three years as Assistant Director of the Institute for Ministry at Sacred Heart Seminary in Detroit, part-time ministry in pastoral care for two years at St. Robert Parish in Ada and then ten years as bursar at Marywood.

The two most significant events which brought about major changes in Lenora’s thinking and praying, were the Second Vatican Council and her study in the area of the new cosmology. As she learned about the new science, she experienced and spoke of the grandeur of God’s creation with wonder and awe. She found new meaning in the idea spoken by the 2nd century Saint Irenaeus, “The glory of God is the human person fully alive.” This she believed with her full being and spoke of in her final days.

Lenora felt she had been blessed with wonderful friends throughout her life. Her travels, attending plays and concerts, going on vacation – all were enhanced by doing them with friends. Her dear friends were also there for her in the not-so-good times.

Listening for that “tiny whispering sound” and being in awe and wonder at God’s creation were at the heart of her prayer life in her later years. A favorite prayer was that of Dag Hammarskjold: “For all that has been – thanks. For all that will be – yes.”

Sr. Lenora is survived by cousins, many friends, and members of her Dominican Sisters ~ Grand Rapids Community.

Entered eternal life on February 9, 2018 at the age of 92 after 73 years of religious life

We commend Sister Lenora to your prayers.