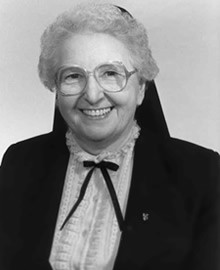 Sister Kathleen's favorite ejaculation on all occasions was “Sweet Jesus, keep me near Thee” about which she remarked, “It works every time!”

God has heard her final prayer, and her dedicated life of love, serving and caring has now been exchanged for a life not only near to Jesus, but an everlasting life with God, our Blessed Mother, and all the Saints.

It was in a staunch Catholic, Irish home in Detroit, Michigan on July 9, 1915, that Sister Kathleen was the first child born to Peter aid Nellie Ryder Mooney. On July 18 she received the saving waters of Baptism and the name of Mary Ellen at St. Charles Church in East Detroit. A little sister Kathleen Ann died in infancy so Mary Ellen was very special to her parents and three brothers. By the time of her First Holy Communion her family had become members of St. Gabriel Parish in west Detroit. In her autobiography she happily recalled the day of her First Holy Communion about which she wrote.”The day of my First Communion stands out above all days–threatening a dull rainy day, He turned it into a beautiful sunny day,” This memorable occasion on April 22, 1923 was also the day of her Confirmation by Bishop M. J. Gallagher.

She attended Field School for kindergarten and her elementary education continued at St. Gabriel School where she was taught by the Adrian Dominicans. After attending and graduating from Southwestern High School, she went to work as a secretary at the R. L. Polk Directory Company. These days were the aftermath of the Depression and as soon as her father was able to return to work, Mary Ellen decided to fulfill her life long ambition to enter our novitiate. She contacted her aunt, Sister Mary Ellen Ryder, in our Community to make the arrangements for her.

On February 2, 1936, Mary Ellen came to Marywood. At that time Sister Jerome Smithers was the postulant and novice mistress and Mother Eveline Mackey, the Mother General, who on August 4, 1936, gave her the Dominican habit and the name of Sister Ann Kathleen of the Infant Jesus, a name she went by until December 1986 when she requested to drop the Ann. Her canonical year was made under Sister Fabian MacDonald’s guidance and on August 5, 1937, Mother Euphrasia Sullivan received her First Profession of Vows.

For forty-five years Sister Kathleen was a primary teacher and what a much loved, enthusiastic, and excellent teacher she was! During many of her years of teaching, Sister Paula, our Community Supervisor, asked her to help train and supervise our beginning teachers. Likewise for several years in Detroit she was asked by the teacher training institutions to work with their student teachers in her classroom. Her classroom was always meticulously clean, attractive, and inviting. Thousands were the little children who were the recipients of her competence and wisdom. Then, too, numerous were the children she prepared for their First Holy Communion. Well did she implement our Lord’s tender words, “Let the children come to me and do not hinder them. It is to just such as these the kingdom of God belongs” (Mt 10: 14).

Her rich and fruitful years in Catholic education were spent at the following missions and places: St. Joseph, West Branch; Holy Trinity, Alpine; Immaculate Heart of Mary, Grand Rapids (where with two other Sisters she was a pioneer when that school opened in 1952); Our Lady of Grace, Dearborn Heights; St. Alfred, Taylor; Blessed Sacrament, Grand Rapids; and the Grand Traverse Area Schools, Traverse City.

In 1983 she left her beloved classroom, and she described this as being “recycled”. Sister Theresa Bray, the Coordinator at Marywood, invited her to become the Marywood Guest Hostess. This role was not new to her as during the summers of her five years she had just completed at Traverse City, she was the gracious hostess for our visiting Sisters and others. At Marywood she did a superb job and her organizational abilities and skills were well utilized. Each guest was special, and she did so much to make every guest feel so very welcome.

Sister Kathleen was a much loved Community member with a bubbly, cheerful, pleasant, and even tempered disposition who was ever ready to do any kind of work except cooking. She used to say that she was good “at the cold stuff”.

Sister Kathleen was most grateful to the Community for the twenty years she was assigned to missions in the Detroit area which enabled her to visit and care for her dear, aged mother. Life for Sister. Kathleen did have its diversions. She like to watch all sports as the seasons rolled around but her favorite was baseball–a real “Tiger” fan! She was an avid reader, enjoyed crossword puzzles, and television.

She suffered a stroke on Easter Monday of 1988, a day that was to have been a lovely outing for her. After this she was still the lovable, smiling, and cheerful Sister Kathleen, but as a result of the stroke, she lost much of her leadership and work competencies. However, she was able to function with the Community, and she took great pride and joy in serving a glass of water as people came through the food line. Undoubtedly she recalled God’s promised blessing on those who gave a cup of cold water in His name.

On September 20, 1991, Sister suffered a massive stroke from which she was not to recover. God called her HOME on October 11, 1991. What a royal welcome must have awaited Sister Kathleen who had influenced and led so many of God’s little ones to our Lord and who had brought so much joy and sunshine to the lives of others.

Sister Kathleen enjoyed life and the people around her especially her great Dominican family. Her own family, too, was very close to her and she appreciated their frequent telephone calls. At the time of her Golden Jubilee in 1986 she wrote, “I am grateful to God and to my Community for the many graces, blessings, and happy years given to me as a Grand Rapids Dominican.” And we likewise are grateful for the blessing with which the Church and our Dominican Community have been enriched because of the noble and unselfish life of our dear Sister Kathleen. May she now enjoy to the full the glories of the Beatific Vision.

Sister Kathleen is survived by her brother and sister-in-law Raymond and Phyllis Mooney of Lincoln Park, MI, her nieces, nephews, cousins, and many friends.

We commend Sister Kathleen to your prayers.