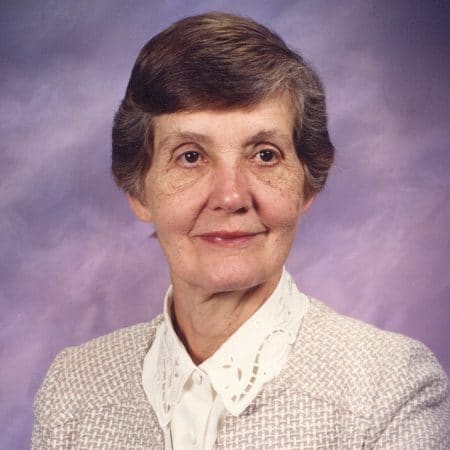 “‘Write the vision down. . . since the vision is for its own time, eager for its fulfillment, it does not deceive; if it comes slowly, wait, for come it will, without fail’ (Hab. 2: 2-3). I found a match for my vision with the Grand Rapids Dominicans. It has come slowly and it has not failed and has not deceived.”

Thus on her fiftieth anniversary as a Dominican, Sister JoAn Brown described the vision that brought her to our congregation.

JoAn was born April 17, 1931 in Flint, Michigan, the oldest of six daughters of Vincent and Marie Beaudoin Brown. She grew up in a rural area of Montrose, Michigan and attended Dyball Elementary School, a two-room school where she graduated with honors. Then she moved to Flint and lived with her aunt in order to attend St. Michael’s High School. In November of her freshman year she felt an unmistakable call from the Lord to enter religious life. At 14 years of age she was too young to join the Sisters of the Immaculate Heart of Mary, who taught at St. Michael’s, and so she applied to the Dominican Sisters of Oxford (then located in Pontiac) and was accepted.

On August 30, 1945 at the age of 14 JoAn entered the small, young congregation whose roots were in Slovakia. The following year she received the habit and the name of Sister Marie Yvonne. She was known by this name until after Vatican II when, like many others, she chose to return to her baptismal name of JoAn. After making profession she finished her high school education and began college at Siena Heights, receiving her BA in 1959.

Sister’s teaching career began in 1947. For eight years she taught in grades K-8 in Detroit, Central City, PA, and Lapeer, Michigan. Beginning in 1955 she was assigned to teach secondary English in Detroit, Flint and Pontiac. She was given responsibility for the school newspaper and library as well. This gave her the incentive to gain a Master’s degree in librarianship from Western Michigan University. At Western Michigan she was inducted into Theta Phi Mu, library honor society.

In 1977, after 30 years in education, Sister JoAn became administrator of Marian Place, a residence for independent senior citizens in Monroe, Michigan where she served for three years. Her association with Grand Rapids Dominicans began in 1980, when she taught English at St. Francis School, Traverse City.
In February 1981 she was elected president of the Oxford congregation. When her term in leadership was completed in 1985 she returned to education as media director at Lansing Catholic Central High School.

Meanwhile the vision had been taking shape. During the summer of 1979, after a powerful experience of the Spiritual Exercises of St. Ignatius, Sister JoAn felt called to the ministry of spiritual direction. She took several workshops and then in January 1984 she enrolled in a two-year program at Colombiere Center for Spirituality. She graduated from the program and was certified as a spiritual director in May 1987. The following August, after two years of discernment, she made the decision to transfer to the Grand Rapids Dominicans, whom she saw as a community that is deeply involved in mission.

After her acceptance as a probationary candidate in November 1987 Sister JoAn continued in her position at Lansing Catholic Central until 1990. She became a vowed Grand Rapids Dominican on October 13, 1991. During a year of transition she lived at Immaculate Heart of Mary convent and worked for Manpower, a temp service.

Since 1991 she served as coordinator of pastoral care, spiritual director, and parish librarian at St. Robert of Newminster Parish, Ada, Michigan. In this capacity, Sister JoAn visited the sick and shut-ins, comforted the bereaved, coordinated service projects and prayer groups, conducted retreats and days of reflection.

Sister JoAn was an able and sought after preacher of God’s Holy Word; she also gave guided retreats at Dominican Center and served as a spiritual director for many sisters in her new Dominican family.

“My decision to transfer from Oxford to Grand Rapids after 42 years of religious life profoundly changed me. One of the greatest ‘lessons of my life’ was the knowledge that with God’s help, I could do anything. During my life I have been asked to do many things for which I have been totally unprepared; with God’s help, all things worked out well, even better than I would have hoped.”

Since childhood JoAn found relaxing in crafts such as embroidering, crocheting, knitting and making hair-pin lace. As a life-time reader with a passion for study, she surrounded herself with books. She also enjoyed music and outside exercise.

She was a holy, selfless, tireless worker, and a superb preacher who modeled all the charisms of Dominican life. Many of our Sisters benefitted from her friendship, spiritual direction and retreats.

Sister JoAn Brown is survived by her sisters Rita Noon of Haslett, Michigan; Dolores (Lowell) Levi of East Lansing, Michigan; Mary Alice (William) Firman of Vanderbilt, Michigan and Micki (Ab) Abdi of Melbourne, Florida; one sister, Yvonne Cudd preceded her in death. She will be missed by many nieces and nephews, friends and Sisters in her Dominican community.

We commend Sister JoAn to your prayers.