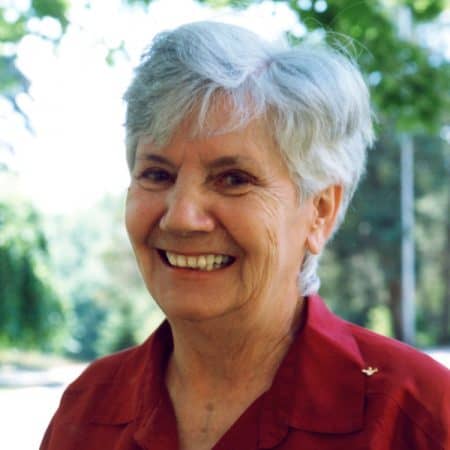 “Lord, make me an instrument of your peace.”

This prayer of St. Francis was a favorite of Jeannine Kalisz. Born Anna Agnes on June 30, 1923 she was the daughter of Polish immigrants, John and Agnes Ruszkiewicz Kalisz. She had seven brothers and one sister.

Eager to serve as a missionary, while in high school Anna applied to join the Missionary Sisters of the Sacred Heart in New York. Instead, she decided on the Grand Rapids Dominicans whom she knew from St. Mary Magdalen School in Melvindale and whom she loved dearly. At the time of her entrance the Congregation had missions only in the United States and Canada. Over the years, however, she served as a missionary in three different countries overseas.

After graduating from Melvindale High School, Anna Agnes entered the Congregation in September 1941 and the following August was received and given the name Sister Jeannine. After first profession and a year of study, she went to her first mission, St. Rita School, Saginaw where for five years she taught grades 3-4. From there she went to Holy Cross, Santa Cruz, New Mexico and St. Michael, Suttons Bay where she taught upper grades and served as superior. In 1957, she returned to St. Rita’s as superior. During this term she completed work on a bachelor’s degree from Aquinas College with a major in history and minors in Spanish and elementary music. In 1962, Sister Jeannine was again in Santa Cruz and in 1968 at Our Lady of Fatima, Albuquerque.

Then in 1969, her dream of foreign missionary work was fulfilled. She went to our mission in Chimbote, Peru to teach catechetics. Then in 1975, she and Sister Jean Reimer went to Chimaltenango, Guatemala to serve in pastoral ministry. There at 3:00 one morning, they experienced an earthquake of 7.8 magnitude on the Richter scale. Familiar with earthquakes from her time in Chimbote, Jeannine led Jean out onto the patio as the walls of their house fell in on the rooms where they had been sleeping. It was several days before the community back in Michigan knew of the whereabouts of our two Sisters. Finally a message came from the head of the missionary team in Chimaltenango, via ham radio to the San Francisco office of the Latin-American Mission Program. The disaster put a new focus on the Sisters’ mission. Now they helped to bury the dead, comfort the living and rebuild both the lives and the hope of the survivors.

Sister Jeannine returned to New Mexico for two years in Total Religious Education in Santa Cruz and San Juan Pueblo. Then in 1978, she was again in Chimbote.

Meanwhile her brother Raymond, who had joined the SVD Fathers, was stationed in Papua-New Guinea as headmaster of St. John’s Seminary. On August 15, 1980 he was consecrated Bishop and invited her to come to Wewak and teach the seminarians. She received permission from Sister Norbert, Prioress and in 1981 began 10 years on the other side of the world. She lived with Sisters of Mercy from Australia. Besides teaching seminarians, she made trips to remote mission stations during summer vacations and later was pastoral minister in Emmaus Parish, where she was involved with a literacy program for women. he language of the Church in Papua-New Guinea was Pidgin English which Sister Jeanine added to her repertoire of languages.

Between June 1986 and January 1987, while at home on leave and with her family, she visited West Germany and Poland.

In 1992, she had a sabbatical year with three months at Abba House of Prayer in Albany, New York and volunteer ministry at Marywood. In 1993, she officially “retired” and went to St. Francis de Sales convent in Holland Michigan where Sister Jeannine’s facility with Spanish was an asset for the Hispanic community who comprised 40 percent of the parish. After her official retirement she also served several years at St. Anthony Parish in Fort Sumner, NM.

Of Sister Jeannine it has been said, “She never knew a stranger.” Surely from her early days in Melvindale to her last days at Marywood Health Center and as a lively, much loved participant in the PACE program, Sister Jeannine was a person of genuine service and profound kindness always laced with a great sense of humor. She used her humor to “break the ice” in awkward situations and to deal with the inevitable frustrations of life. She was a great storyteller and regaled ages young and old with her animated mouse routine.

During her times away, Sister Jeannine would send letters with the salutation Paz y Amor in the upper left hand corner. Peace and Love – what a fitting legacy left by this woman of the Word, cheerful worker in God’s vineyard.

We commend Sr. Jeannine to your prayers.