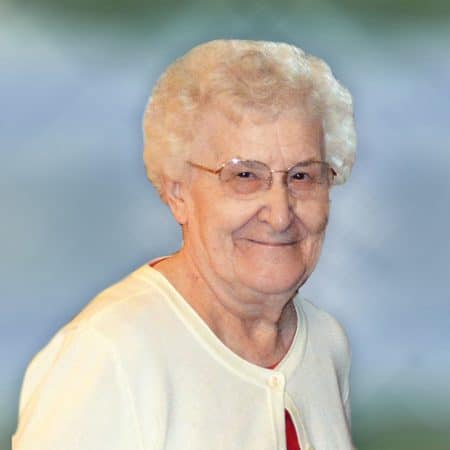 I believe that love is the strongest force in the world and classrooms must be loaded with it.

Sister Janet Mish wrote the above after many years as teacher and principal of parish elementary schools in Michigan. That love included a belief in the possibilities of children and their teachers as well as a profound delight in her charges whatever their ages.

Barbara Jean Mish, born in Muskegon September 16, 1931, was the fourth child of Joseph and Theresa Kruszka Mish. She had eight siblings, including a sister who died in infancy. Her education began at St. Michael’s which was a parish serving Polish families in Muskegon. Later she met the Dominican Sisters at St. Mary’s School and found them to be “very warm and personable women. . . . fine teachers and really loving ladies.” She remembered with particular fondness Sisters Agnes Leo, Helen Louise; and Redempta, who taught commercial courses so well that Barbara worked as parish secretary from the 11th grade to a year after graduation. Prior to that, she had worked as a page in Hackley Library and as a clerk in a department store.

Barbara had an aunt, a Felician Sister, who encouraged her toward religious life. When she asked her father, “If I decide to be a Sister, what kind would you like me to be?” he responded without hesitation, “Be a damn good one, or don’t be one at all.” Since all of the Dominicans she knew were “damn good ones,” she decided to join them and so entered on June 20, 1950. She took the name Janet after her sister who had died in infancy.

A few days after her profession in 1952, Sister Janet was assigned to teach junior high grades at East Tawas St. Joseph’s School. Three years later, in her own words, having “found much happiness and peace and above all, God’s will in this life,” she requested to take final vows which she did on June 16, 1955.

Her background for the educational apostolate included a bachelor’s degree from Aquinas College, a Master’s in Education from Wayne State University and summer school at the University of the South Pacific in Stockton, California as well as at Rhode Island College in Providence, Rhode Island.

Sister Janet was Executive Secretary for the Congregation during the term of Sr. Teresa Houlihan from 1984 – 1988. She demonstrated her talent for writing in the sparkle of her obituaries for deceased members. After finishing her term, she became Associate Director of Aquinas College’s Emeritus College. In 2001, Sister Janet “retired” and worked at Marywood as information technology support volunteer for eighteen years.

Sister Janet had the ability to relate well with children and adults, both in her professional life and her life in community. She enjoyed reading, crocheting, macramé, sewing, cooking, and playing cards. She had a wry sense of humor and loved relating anecdotes about her nephews as well as former students who delighted her with their comments on life. She loved to travel with her friend, Sister Margaret Schneider, and together they visited Montana and New Orleans through Elderhostel and spent many happy winters in Florida with relatives.

Toward the end of her ministry Sister Janet wrote, “Most of my Dominican life has been rich in joy and blessings. I have been given much by my community; and I hope I have been equally generous in giving to my community.” Earlier she had written, “Only God can judge whether I’ve lived up to my Dad’s expectation.” Those who knew her would reply with a resounding “Yes!”

Sister Janet is survived by her brothers Joseph (Elsie) Mish and Jerome Mish of Muskegon, MI and her sister-in-law Joan Mish of Denver, CO; nieces, nephews, friends and Sisters in her Dominican Community.

We commend Sister Janet to your prayers.

Sister Janet’s compassion for older adults wass articulated in her prayer ministry and in her acts of kindness and care for Sisters at Marywood.

Working in the IT department was an everyday challenge for Sister Janet. Her fingerprints are all over the IT office and storage area, evidence of her wit and organization skills.