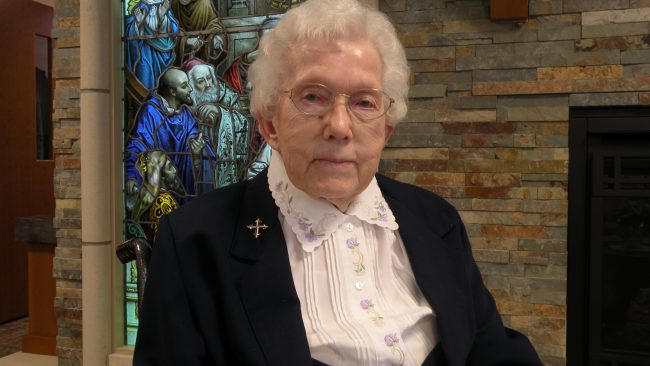 Helena was born in Irons, Michigan on February 20, 1921 and she was the youngest of three sisters of the Judis family who joined the Grand Rapids Dominican Congregation. Her parents, Dominick and Kazimiera (Elijosius) Judis, were immigrants from Lithuania; she was a seamstress and he was a tailor when they first came to Chicago, where they met and married. After several years in Chicago and the death of their first daughter, Kazimiera’s poor health prompted them to move to a farm near the Lithuanian settlement in Irons, Michigan. Here their next four children were born, three of whom entered religious life, and the fourth became a priest. These four were: Emily and Ugonna (later Sisters Donata and Emeliana), Walter (later Fr. Jude) and Helena (later Sister Helen). After these four, seven more children were born on the homestead in Irons. The family was very close, and proud of their Lithuanian heritage.

Mass was offered twice each month (weather permitting) in the Catholic mission church five miles from their home. The family never owned a car, but drove to church by horse and wagon or sleigh — a two-hour trip. The children received religious instruction for two weeks from two Dominican Sisters prior to receiving the sacrament of First Communion. The rest of their training in matters of religion was up to their mother who taught them through word, example and song to do all things with and in prayer. One of Helena’s fondest memories was listening to her mother singing the psalms all the way to church and back home.

Although the family was poor and had no toys purchased from a store, they were resourceful in making their own fun. They cut up an old broom handle and painted the pieces for checkers, played cards, and in the summer enjoyed swimming in a creek in the woods.

Helen’s early education was in a one-room public school, Elk No. 6 in Irons. She started high school at Dickson School in Brethren and then continued her education as an Aspirant at Marywood, where her sisters Emily and Ugonna had preceded her. In spring 1938, the house in which all of the children were born burned to the ground. And then in her junior year her mother died and Helen went home to help her younger sister Anna take care of the large family. She was sad to leave Marywood and had little hope of returning, but, as she said in her own words, “God arranged things so that I was able to come back after a year.” She completed her high school in Brethren and returned to Marywood, entering as a postulant in 1940.

At the age of twenty-one Helen received the habit and the name Sister Mary Walter of the Sacred Heart. In 1968 she returned to her baptismal name and she changed the spelling of her surname to Jude as had her brother, Fr. Walter Jude.

In 1978, Sister Helen was a live-in care provider for an elderly woman. Then she worked for eleven years at Sacred Heart, Grand Rapids as a librarian with additional pastoral duties. In 1990 she went to her brother’s parish in Irons along with Sister Emeliana and served in various ministries, including care of the sick and elderly. Returning to the motherhouse in 1995, she engaged in volunteer ministries, among them sewing for the poor and processing stamps as a source of revenue for mission.

Sister Helen is remembered as a quiet, gentle and kind person. When she saw something that needed to be done, she was there to do it. Always one to pick up new skills, she learned to knit and crochet in the convent. When she was missioned in Hannah, she even learned how to drive. Among her interests she listed arts and crafts, reading, sewing, quilting, and gardening.

At the time of her Golden Jubilee she wrote, “I enjoy nature with all its beauty and unexpected surprises. God speaks to me in the beauty and silence of the morning sunrise and His majestic sunset. How awesome are His season changes bringing on a sense of wonderment with each change.”

We commend Sister Helen to your prayers.

Sister Helen on the beach