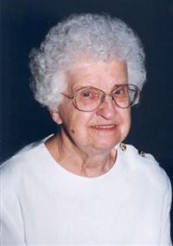 “Come, you whom my Father has blessed; inherit the kingdom prepared for you since the foundation of the world.” Matthew 25:34

Not only did Sister Florence Agnes cherish St. Paul’s letter on charity (I Cor 13), but very beautifully implemented its contents in her daily living and in her association with others. Sister’s manner was always a quiet, reserved one, but at the same time, she was lovely to be with and enhanced community life. Her prayer life was very meaningful to her and an inspiration to others.

Sister’s life began in Grand Rapids on March 6, 1912. She was baptized in St. Adalbert Church on March 9, 1912, and given the name of Josephine Anne. Sister’s life was enhanced because her adopted parents, David and Maud (Gouan) Klingler “chose” her. The Klinglers had lost two sons, who were only hours old when they died. Thinking they could have no children of their own, they came to Grand Rapids with the intent of adopting a child. The family finally received word that there was a thirteen-month old baby girl who was very frail and ill. Mr. Klingler, however, said that was what they wanted. She was so tiny when the father brought her from Grand Rapids to Cadillac on the train that he carried her on a large pillow. When the doctor later saw Josephine, he was sure they had taken his advice and adopted another child. Josephine had become well and strong.

Her First Holy Communion and Confirmation were celebrated at St. Ann, Cadillac in June 1919. Bishop E. D. Kelly confirmed her. Her elementary education was with the Mercy Sisters at St. Ann School. Since there was no Catholic high school, she enrolled in the local high school, which she attended for two years. Her parents wanted her to have a musical training and for five years she took lessons from the Sisters becoming quite accomplished. How the Klinglers loved their Josephine! And God blessed them abundantly for their generous love. After Josephine was adopted, they had three children, two girls and a boy, who were taught to have special respect and love for Josephine.

The Klinglers had a grocery store and Josephine became very efficient in helping her father. In fact, she did most of the bookkeeping. Happy as she was in her loving, Christian home, the good Lord was saying, “Come, Follow Me!” When she was in the eighth grade, a Sister visitor came to their classroom. When Sister opened her cloak, they were so surprised because up until then they had only seen their own Sisters dressed in black. Josephine was much impressed with the beautiful white habit. Nevertheless, she did not give the religious life much more thought until one of her good school friends entered our Community and wrote to Josephine and told her “to come and see it.” This she did.

On August 26, 1928, she came to Marywood to enter our Dominican Community under Sister Jerome Smithers’ guidance. Her reception of the habit of St. Dominic was on August 29, 1929, at which time she received the name of Sister Florence Agnes of the Sacred Heart of Mary. Her First Profession was on September 1, 1931. Mother Eveline Mackey was the Prioress General, both at the time of her Reception and Profession.

The September after her First Profession she began to teach and for over fifty years she was involved in Catholic education. These years took her to the following schools and places: St. Andrew and Blessed Sacrament, Grand Rapids; St. Joseph, St. Boniface, and Holy Rosary Academy, Bay City; St. Joseph, East Tawas; Sacred Heart, Muskegon Heights; St. Mary, Muskegon; Maple Grove; St. Anne, Alpena; and St. Anthony, Penasco, New Mexico. She was an excellent and efficient early elementary teacher and her interest in her pupils and her influence on them were remarkable. Her competency extended far beyond the academic. She loved her pupils and they reciprocated her love. Her prayers and interest followed them far after their formal education was completed. The parents so much appreciated Sister’s excellent training and influence on their children. Sister was one of our first Sisters to be trained in the Workshop Way®.

In addition to teaching during the regular school year, Sister continued taking work in education and also spent many summers doing remedial work with children. Being a very gifted, talented, and energetic person, Sister never seemed to be idle as she had many interests and hobbies: stamp collecting, gardening, knitting, crocheting, baking rolls and coffee cakes (a specialty), visiting the sick Sisters and providing them with thoughtful goodies: picture taking, and traveling. Above all, she was a great nature lover and her “green thumb” produced wonders.

In 1984, Sister Florence Agnes came to the House of Studies, and in 1985 when the Sisters from there moved to Marywood, she became one of them. At Marywood she was able to devote more time to her many hobbies. She was a real asset to community life because of her work in sorting and selling stamps; beautifying the Marywood flower garden; her work with the salad bar; helping in the printing department; and being a generous and competent companion accompanying Sisters to appointments with the doctor.

In a recent autobiographical sketch, Sister made the following remark: She was grateful to God for the graces and gifts given her and for her family, friends, and all the Sisters with whom she lived and bonded. She enjoyed all the children she ever taught and continued her interest in them in their adult life. She remembered them in her daily prayers and hoped to meet them all in heaven some day!

And now, Sister Florence Agnes has reached her eternal goal and St. Paul’s words are verified for her in a special way: “Love never fails . . .” When the perfect comes, the imperfect will pass away. . .” Then we shall see face to face. . .” Then I shall know even as I am known” (I Cor 13).

May Sister Florence Agnes enjoy to the full the glories of Christ’s Redemption and Resurrection and spend an eternity in love with God and all the blessed. May the peace and gentility with which she enriched the lives of others continue to be a nurturing leaven in our Community.

Sister is survived by her sister-in-law, Dolores Klingler of Ann Arbor; nieces, nephews, cousins, many friends and a loving Community.

We commend Sister Florence Agnes to your prayers.