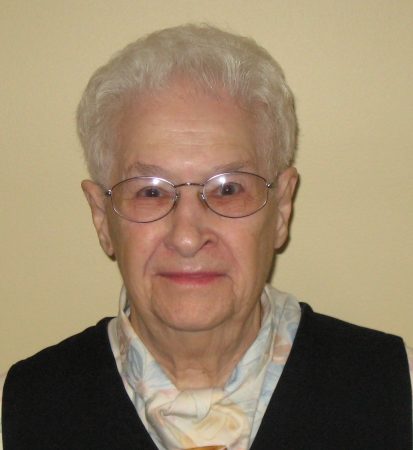 “How can I make a return to my God for the good He has done to me?” Sister Elaine Mitchell asked that question at the time of her Diamond Jubilee. She answered it throughout her religious life by giving and doing for others through teaching, food service, welcoming, and writing. Born on the Feast of the Annunciation, March 25, 1920, Elaine Genevieve was the third of fifteen children of French-German heritage. Her father, Edmond, was American-born; her mother, Mary Magdalene Schellpfeffer, was a native of Heidelburg, Germany.

Elaine’s earliest years were in the small town of Tomahawk, Wisconsin. When she was four the family moved to a farm five miles from Marinette, Wisconsin. With her siblings she attended St. Joseph School in Marinette where she met the Grand Rapids Dominicans. When Elaine was ten years old the family moved again, sailing across Lake Michigan to Muskegon. She finished her grade school education in public schools there.

At the age of thirteen Elaine contracted polio. She attributed her cure to the intercession of Saint Martin de Porres and the Little Flower. The only permanent effect was some difficulty walking. By the time she was ready for high school she was able to walk to St. Mary’s School – nine miles each way. There she was delighted to meet again Sisters Borgia, Alberta, Gerald, Agnes Regina, and Rosella who encouraged her to consider a vocation to religious life. After graduation in 1938, she taught nursery school one summer and prepared to join the Dominican Sisters of Grand Rapids.

September 8, 1938 Elaine became a postulant at Marywood. At her reception she retained her baptismal name and took the title of the Holy Cross. She made first vows in 1940 and after another year at the Motherhouse was sent to St. John’s, Essexville. Following an intensive course in teacher education, she taught elementary classes for four years. In the following summers, she faithfully returned to Grand Rapids to take classes at Aquinas College, graduating with a Bachelor of Arts degree in 1956.

In 1981, Sister Elaine became Executive Housekeeper at the Congregation’s House of Studies, continuing in that capacity when she moved to Marywood in 1985. After a year as assistant pastoral minister at Holy Trinity, Bay City, she returned to Marywood as receptionist. Still later she became coordinator of personal needs at Aquinata Hall.

Turning her considerable writing ability to good advantage, Sister Elaine won first prize in a national contest with an essay on the dignity of human persons in 1970. She wrote many poems and received prizes from the Catholic Poetry Association and the International Poetry Association. In 1973 she was in a three-way tie for International Poet Laureate. In the drawing to break the tie, she received First Honorable Mention. The following summer she was chairperson of the Association’s literary division. Her name was included in the International Who’s Who of Poetry (1970-1971); the Dictionary of International Biography; and the Poetry Anthology for Teachers and Librarians. A book of her poems, Love Has Many Voices, was assembled at Marywood. Over the years Sister Elaine gained further new competencies. She earned a certificate in Religious Education for Deaf Persons in 1982 and served as a signer at televised Masses and she studied Braille in order to assist persons with limited eyesight.

Sister Elaine is remembered as a helpful, creative community member, generous with her time and talent. She was devoted to her large family, especially to a sister with disabilities. Her hobbies and interests included reading, sewing, crocheting, upholstering, and baking bread for Sisters. She once admitted, “I always dreamed of playing the cello – perhaps in heaven!”

Stillness, yes, but in its quiet
There hymns a wordless song.
Magnificent quiet . . .
No need for thought or word
It breathes its message forth.

Caught now in color of a rose,
Or in the note of tiny bird,
Or yet in might of mountain bulk
Where snows lay calm on top.

Ah yes, ‘tis here this quietude
But Oh, the awe
Within a soul in love with God.

We commend Sister Elaine to your prayers.

Sister Elaine on her Silver Jubilee in Merrill, Michigan in 1967