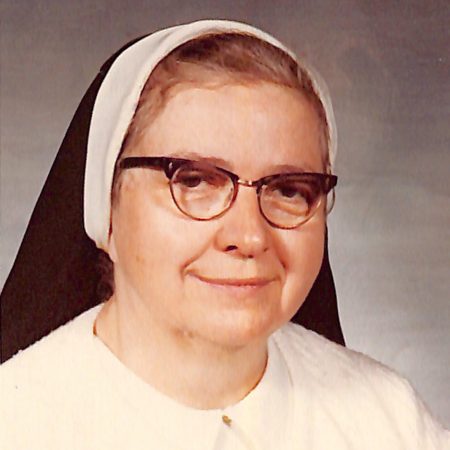 “Children’s faces looking up/Holding wonder like a cup” — the familiar words of a favorite poem drifted in over the radio, and Gertrude Usakowski working away from home in California heard them with her own wonder wakened. Suddenly she seemed to see them: All God’s children! And another voice from within her — “Let the children come to me … the Kingdom of God belongs to such as these.” Old doubts gave way. She knew for sure God wanted her to be a teacher and a Sister. She would go home, and for the rest, God would smooth the way. It was 1937, Depression and hard times for most everyone. Hauntingly, the word “dowry” and the wardrobe list she had heard about spelled money, and money spelled jobs. With her little California savings, she returned home.

Joseph and Eleanore Lipczynski Usakowski were typical of the working class families of St. Adalbert’ s Parish in Grand Rapids, Michigan. The tradition of a solid Catholic Polish family had been theirs to build on, and they nurtured their family of three children in a heritage of trust and hope grounded in their Faith. Their second child, Gertrude Mary, was born November 15, 1917 and baptized December 23, 1917. Her contacts with Sisters began with her grade school education by the Sisters of Notre Dame, and was followed by her high school associations with the Dominican Sisters teaching at Catholic Central.

Realization of her religious vocation was slow and silent. Already in her senior year, Gertrude was troubled by a loss of direction. Around her and increasingly, the girls were talking of their What’s and Why’s and Where To’s after graduation. Gertrude was touching bottom. Her tears one day splashed across her lab sheet in Sister Annabel Bollman’s biology class. The kindly Sister took her student into the hall to offer help. “I told her, ‘I have no plans — everyone else has plans’.” Sister Annabel disappeared for a minute into the convent area across the hall, and brought back a novena to Martin de Porres. Not a word about entering the convent, just kindly understanding. She confided in her sister Esther and kept up the novena. The ninth day came, and Esther invited her to an ice cream parlor on Stocking Avenue to tell her, “If you want to go to the convent, I just put $100.00 in the bank for you.” Family! To the offer of a job in California, Gertrude remonstrated, “I don’t want to go to California. I want to go to the convent.” Her mother urged, “Go, and come back to the convent.” Her last job at St. Mary’s Hospital in Grand Rapids sent her packing. Her co-workers surprised her with a party and trunk filled with the “list.” So fortified, she entered Marywood September 8, 1938. A year later Mother Euphrasia Sullivan gave her the habit and the name Sister Camilla of the Holy Cross. Her First Profession a year later preceded her Final Vows, August 17, 1943.

The children were waiting for her throughout the next forty years in elementary schools throughout Michigan. She shared with them the wonder of all they could learn, though increasingly her own health deteriorated and necessitated frequent changes. A neurological disorder became the Cross she would share with the Master-Teacher the rest of her life. Had she not been named for the Cross! What might have been lost to discouragement was sustained by community support and love. In retrospect she wrote, “Through it all the Lord has carried me along, pieces and all. God always comes through when I need Him most, and I will continue to praise and bless Him the rest of my days. I am grateful to the people who brought me to this hour; I have never regretted being a Grand Rapids Dominican, never have I had one moment of lonesomeness. God always provided me with many helpful and loving Sisters.”

So it was in that loving, widespread community support that Sister eventually found it necessary to retire from active teaching. In 1980 she went to the House of Studies to minister as the house liturgist and in various homemaking capacities. With the closing of the House of Studies, she moved to Marywood to continue the service of her Sisters. Her lovely voice joined those of her community in the liturgy. “All of My Days, 0 Lord, Will I Sing Your Praise!”

A great joy to her was the opportunity to visit and to assist her sister Esther, whose initial generosity had helped her in her entry. For her this was a little return this side of heaven to prelude her eternal thankfulness to those who facilitated a life of welcoming God’s children. “Whoever welcomes a child such as this for my sake welcomes me. And whoever welcomes me welcomes not me, but the One who sent me.”

Sister Camilla is survived by her sister-in-law Eleanor Wilczynski of Grand Rapids, nieces, nephews, cousins and many friends.

We commend Sister Camilla to your prayers.