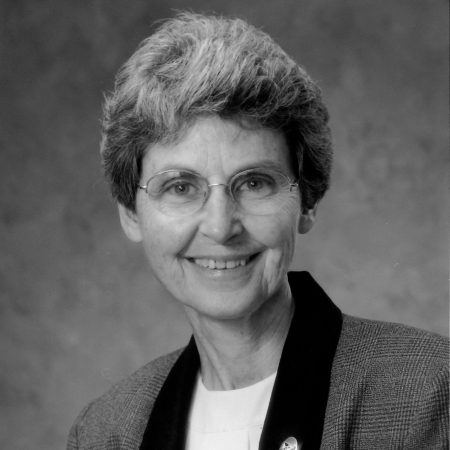 “I would love to live like a river flows, carried by the surprise of its own unfolding.” -John O'Donohue

Anna Marie Thielen was born December 11, 1934 in Beal City, Michigan, the first child of Ambrose and Agnes Thielen. Eight siblings followed her in the family. After completing her high school education, she worked as a secretary for two years. Then her love for travel and desire to see the world motivated her to become a flight attendant with Pan Am Airlines which was the principal and largest international air carrier in the United States. At the same time, Anna Marie felt a tug toward a more contemplative life. And so began her years of living “both/and” rather than “either/or,” even though she most likely did not know such would be the case at the time of her decision to become a Sister of St. Dominic.

In 1959, she entered the congregation at Marywood and was given the name Sister Elizabeth of the Infant Jesus. She later returned to a shortened version of her baptismal name, Ann. She expected to spend the rest of her life in Michigan, but that was not to be. She graduated from the Mercy Central School of Nursing with an R.N. in 1963 and was certified as a nurse in Michigan, New Mexico and California. Later she worked as a pastoral minister, earning a certificate in spiritual direction in 1992. Thus, began alternating ministries and residences between Michigan and New Mexico. Although she loved both locations for their unique, albeit opposite, landscapes, she loved serving people the most.

Sister Ann served as the Director of Nursing at El Centro, California and later worked as a nurse at Guadalupe General Hospital in Santa Rosa, New Mexico. Returning to Michigan, she studied for three years at Aquinas College where she completed her bachelor’s degree while working as Resident Advisor.

Although her life’s work alternated between nursing and pastoral ministry, in reality she combined the two in a synchronicity of caring for the whole person.

After nursing at Nazareth Hospital in Albuquerque, New Mexico, Ann returned to Aquinas College to serve as Head Resident Advisor as well as student, earning her B.A. in Psychology in 1970. Then for two years she served as Director of Religious Education at St. John’s Home while completing her Master of Arts in Religious Education at Aquinas College in 1974. Following the completion of her master’s degree, she served as campus minister at Aquinas College, a position she held for the next six years. Her colleague in liturgical work at Aquinas College remembers planning liturgies with Ann who made it all come together with a calm and serene demeanor. In a telling phrase, her co-worker said: “Liturgies were good, and she was too.”

Although Sister Ann enjoyed living and working in Michigan, the sun and warmth of the Southwest and its people beckoned her back there where she served as pastoral minister at Annunciation Parish in Albuquerque and at St. Luke Parish in Douglas, Arizona, a small town in the San Bernardino Valley which shares a border with Mexico. Then Michigan called her back and she served for six years at St. Stephen Parish in Saginaw.

In 1992, Sister Ann applied for and received a grant to study at Catholic Theological Union in Chicago. In a letter of recommendation, the reviewer wrote: “You can count on her to share with the people with whom she will minister in the future the enrichment that this study program will bring.” And that she did, for she was known as a generous, hard-working and dependable person. Following her study, which included a memorable trip to the Holy Land, Sister Ann served for seven years at St. John’s Parish in Essexville and for another eight years at St. Francis de Sales Parish in Holland, Michigan.

The Southwest called her back and she returned to Albuquerque to serve the poor and marginalized. She answered a help line to assist those needing referrals for basic needs, participated in the Bread and Blessing outreach program, assisted at the Women’s Housing Coalition to raise money for women and children in need. She also volunteered with hospice, made pastoral visits for St. Therese’s parishioners and volunteered at St. Vincent de Paul Thrift Store until her diminishing health necessitated a return to Grand Rapids.

Wherever she lived – Michigan, New Mexico or Arizona – Ann left a legacy of quiet caring and serenity. Hearkening back to her years growing up on the farm, Ann planted flowers wherever she lived and nurtured all who came within her circle of care.

Those who had the opportunity to live with Ann recall that she was that non-anxious presence for which we all yearn. Even as the terrible disease of ALS sapped her strength and took away her ability to speak, she maintained interest in what was going on around her and enjoyed reading and walking outdoors.

Both nurse and pastoral minister; both Michigan and New Mexico; both practitioner and scholar – Ann lived life to the full of “both/and”; rather than “either/or.” As she brought others to God, she found an intimacy with God in her final days that mirrored her life. Among the last things she wrote on her tablet were these words: “I’ve let a lot of things slip now; God and I are just enjoying being together looking out the window.”

Pray for all who have a terminal illness

Sr Ann Thielen delivering gifts for people who are Homebound.

The nurses of Santa Rosa, New Mexico in 1966. Sister Ann is pictured in the front row all the way to the right

Crossing Cultures: From the Grand River to the Rio Grande

A Ministry of Presence with Dominican Sisters in New Mexico