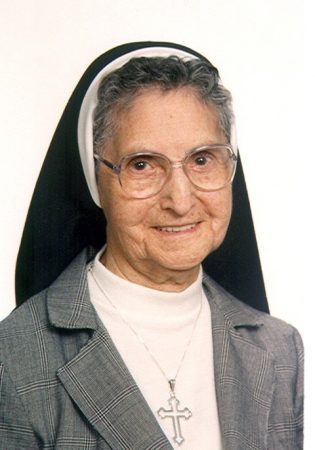 “One day in December, I received an inspiration of entering the convent, and it was placed under the care of Our Lady of Perpetual Help. I promised her . . . I would ask for her name.”

The first vocation garnered from the Dominican fields of the Southwest was Onofre Romero, daughter of Juan Manuel and Teofila Griego Romero. On her father’s side she was descended from Bartolomé Romero, who had come from Spain as a soldier-colonist with Don Juan de Onate in 1598. Onofre, the sixth of ten children, was born June 14, 1910 in Peñasco, New Mexico.

Manuel and Teofila had to be satisfied to educate their children in the local district schools, but Teofila faithfully undertook their religious training in their home. Then in 1925 four Grand Rapids Dominicans opened a school in Dixon, 20 miles away. To take advantage of Catholic school education, Teofila and four of the children moved to Dixon for the school year.

Onofre’s vocation was sown in parental faith and devotion. Earlier associations with other Sisters had left her admiring, but unmoved. “When the Dominicans came,” she added, “I was not sure that these Sisters, who struck me as somewhat sophisticated, would take a poor girl, but they did!”

Onofre’s amazement knew no bounds when her arrival at Marywood, August 8, 1927, coincided with the convening of a General Chapter of all the members of the congregation. The girl of 17, fresh from mountains, mesas and pueblos, could only think of what she had read about – “a big sea of penguins.”

True to her promise, when Onofre received the habit from Mother Eveline Mackey on August 20, 1928, she took the name Sister Ann Perpetua of Our Lady of Perpetual Help. Onofre was the first of many members from the New Mexico mission field.

After making her first vows August 29, 1930, Sister Ann Perpetua was sent to St. Mary’s, Carson City as a homemaker. Although she spoke little English and had to learn about cooking, the four Sisters with whom she lived learned from her even while she was learning English and never complained about her cooking! She remained there three years. “It was my best mission,” she said. And she was on the way to becoming an artist in homemaking.
Over the years Sister Ann Perpetua served in missions throughout Michigan and New Mexico, and one (El Centro) in California. She spent ten years at St. Joseph Seminary, Grand Rapids, many of them as a baker. Other assignments in Michigan included St. Joseph, Saginaw; St. Joseph, Bay City; Catholic Central, Grand Rapids; St. Andrew and St. John’s Home, Grand Rapids; St. John, Essexville; Our Lady of Grace, Dearborn; Aquinas College, Marywood, and St. Alfred, Taylor. In New Mexico she served at Nazareth Sanatorium; Our Lady of Fatima, Albuquerque; Holy Cross; Santa Cruz; and Our Lady, Belen. Everywhere she supported her Sisters by her quiet, capable service and her prayerful presence.

Her gift of presence found its full flowering in a year of caring for her aged mother and in her later apostolates of ministry to the elderly at Santa Cruz and Belen. In 1988 Sister Ann Perpetua returned to Marywood to blend her own graceful aging with that of others. She volunteered for three years at Second Harvest Gleaners, now known as Feeding America West Michigan Food Bank, and Emmaus House (St. Andrew). At Marywood she helped with hospitality at funerals and care of guest rooms.

Quiet and gentle in manner, diminutive in stature, Sister Ann Perpetua stood tall, strong and steady in the estimation of those she served. She was especially devoted to her family. In 2008 Sister Ann Perpetual enjoyed a wonderful 80th Jubilee celebration in her home parish in New Mexico. With her Dominican Family in Grand Rapids Sister Ann Perpetual celebrated her 100th birthday in 2010 joined by family who gathered from all over the United States.

High points in her life were two trips abroad. The first was a tour of Portugal, Spain, and France with Sister Giles, during which they visited Fatima and Lourdes. The second, in 1994 with Sister Marlene was a ten-day tour of the Holy Land. Then in 1998 the two went on a bus tour of the New England states.

As the new millennium approached, Sister Ann Perpetua had to relinquish her volunteer work because of a weakened heart. Her last years at the Marywood Health Center were spent in quiet prayer and witness to a life well lived and a person well loved by her Dominican family, her family of origin and many friends.

Sister Ann Perpetua is survived by nieces, nephews, friends and Sisters in her Dominican Community.

We commend Sister Ann Perpetua to your prayers.

Sister Ann Perpetua at work in the kitchen

Helping out with sewing

In her retirement, Sister Ann Perpetua took up painting