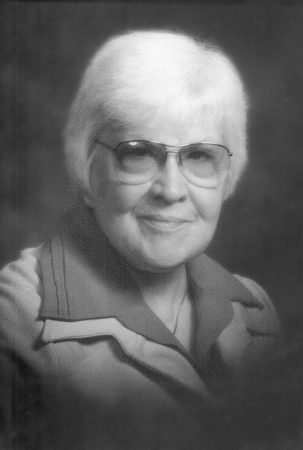 In one of Sister Ann Lucille’s favorite scripture passages, St.Luke states: “Where your treasure is, there will your heart be also.” (12: 34). And she added, “And our heart makes us what we are.”

On December 18, 1912 at Merrill, Michigan, Sister Ann Lucille became God’s special Christmas gift to her parents, William and Mary (Pellerin) McGowan. She was their first child and only girl. At Baptism she was given the name of Wilma Mary. Two brothers later joined the family. Immediately after their nuptial Mass the parents had paid a visit to Our Lady’s altar and offered their firstborn in the service of the Lord. “The gift was accepted then and there, for I never seriously considered anything other than being a Sister.”

From her parents Wilma learned of God and his provident care. “An impetuous child, my early childhood was a succession of misadventures that began as wonderful but always ended as bewilderingly near tragedies.” So she learned to trust the judgment of her parents. During her elementary school years the family moved frequently, but fortunately her mother was a schoolteacher or her early education would have suffered.

By the time of Wilma’s high school years her father, something of a “gypsy,” was a store merchant near Merrill. She attended Sacred Heart High School, where she was taught by Grand Rapids Dominicans. She entered the convent “under the guidance of Sister Gertrude Marie McCue and the prayers of Sister Rose Francis Greiner.” However she was deeply grateful to all her Dominican teachers and friends.

On September 7, 193l Wilma entered the Marywood novitiate with Sister Jerome Smithers as her director. As a member of a large class, she received the habit the following August 17 and was given the name of Sister Ann Lucille of Mary of Nazareth. She made her first profession of vows to Mother Eveline Mackey August 21, 1934.

Then Sister Ann Lucille began her fifty-plus years of dedicated service to Catholic education. Most of those years she taught high school but she did have some profitable experience teaching on the elementary level. Her greatest competency was in the field of English, though she also taught other subjects, depending on the size of the faculty. As an English teacher she was called on to do the extras: forensics, debate, the school paper, the yearbook and moderator for various student groups. For her outstanding work in the field of journalism, she was awarded the much coveted Gold Pen Pin and citation by the University of Michigan. She was a dearly loved teacher, and if the adage “they tease those they love” is true, she was especially loved. As the years progressed she “earned” the title, The White Tornado.

Sister Ann Lucille’s teaching years took her to Traverse City; St. Mary, Saginaw; Lake Leelanau; Melvindale: Gaylord; Catholic Central, Grand Rapids; Mt. Pleasant; St. Alfred, Taylor; Catholic Central, Muskegon; and Bishop Borgess, Detroit. For several summers she taught English literature at Aquinas College. At Taylor, a parish located on busy Telegraph Road, Sr. Ann Lucille taught and lived in barracks formerly used for prisoners at the Willow Run Military Base. In 1953 she was a member of the first faculty to staff Catholic Central, Muskegon. There and at Bishop Borgess, she was a member of inter-community staffing.

Life was not all work for Sister Ann Lucille. Her hobbies were “reading, biking and a little sewing.” The “little sewing” was just that. She kept trying but her accomplishments never quite seemed to reach her expectations. During summers she did considerable traveling and in the course of the years visited Hawaii, most of Canada and many European countries. She also spent a summer at Oxford University in England.

In March 1986 at Traverse City Sister Ann Lucille terminated her teaching years for health reasons. The students took the occasion of a St. Francis-Manistee basketball game to celebrate “Sister Ann Lucille Day.” From then on Marywood was her residence and she lost no time in getting involved in services: Assistant Librarian at West Catholic and later at Catholic Central; part-time assistant at GRACE ecumenical office; tutor for students. In 1998 she began work at a day care service for Alzheimer patients.

Sister Ann Lucille was highly emotional and demonstrative. Yet under her sometimes turbulent surface she had an understanding, prayerful and compassionate heart that made her very conscious of the suffering and needs of others. She was most grateful for the spiritual and academic opportunities offered her during her religious life “to grow and be”; for her family, and for the “classes and classes of students” whom she loved. She always felt the support and concern of her Dominican Sisters and best of all the nearness of God, “in whom we live and move and have our being,” and God’s Holy Mother.

“Death has always been a great and sobering mystery to me,” she wrote, “so I have clung to two passages. First, ‘I am the Resurrection and the Life; he who believes in me, even if he die, shall live’ (John xi, 25); and ‘Death is not turning out the lights, it is blowing out the candle because Dawn has come.’ ”

Sister Ann Lucille is survived by sisters-in-law, Mrs. Irene McGowan of Midland and Mrs. Jean McGowan of Saginaw; nieces, nephews, many friends and a loving Community.

We commend Sister Ann Lucille to your prayers.