A Golden Pathway of Love Led Her To Vocation and Service The passport photo of Margaret Ryan, age 16, traveling from Ireland to Grand Rapids.

In 1913, little Margaret Ryan was born and baptized in Waterford Ireland. The bright, confident child thrived at home and school. She was surrounded by the presence of an extended family and close-knit community. Thanks to a public education fund, she attended an excellent Montessori school founded in 1920 by a “very forward thinking Catholic Sister.” She recalled Maria Montessori visiting the school.

At 16, her teacher read from a leaflet left behind by visiting Grand Rapids Dominican Sisters. Within three days, Margaret had written Marywood. She told her mother, “I know that I am called to serve and to teach”. Neighbors balked, her mother stood faithful and firm urging her to go where God calls. Within the year, she confidently boarded a ship for America and the home of the Dominican Sisters at Marywood in Grand Rapids, Michigan. She became an Aspirant at Marywood Academy, graduating in 1931. In 1932, she received the habit and the name Sister Mary Bride.

After completion of teacher training, she was missioned to Melville in Saskatchewan, Canada. Sister Marybride Ryan, the bright enthusiastic pupil, became an enthusiastic teacher, sharing her love of learning with her students. For the next 15 years she taught high school at St. Henry’s in Melville, teaching every subject including agriculture.

She earned her Ph.D. in English at Catholic University of America and then began teaching at Aquinas College in 1957. Her eloquence, even when speaking extemporaneously, her poems, and articles all demonstrated her own mastery of the art of language. For 30 years, she shared her love of language and writing with students at Aquinas College.

Her joy in knowing that she was where she was meant to be was always present. An excerpt from one of her poem’s “A Golden Path” can be found at the end of this article.

Upon her death in 2010, her obituary read: We remember the grace with which she danced the Irish jig, the confidence and assurance of her bearing, the conviction with which she spoke, the delightful trill of her laughter, her resilience and verve.

The Golden Path a poem by Marybride Ryan, OP

I stood aloft upon a mighty cliff…

The sun was setting in the rosy west
Its crimson edge now sank into the sea
And from that spot, upon the ocean’s breast
It made a golden pathway straight to me.

I launched a golden dream boat on the path
One tiny boat on life’s great ocean wide
One tiny boat upon a golden path
With hungry billows roaring at each side.

So will my boat, just one on life’s great sea
Safe guided by the Sun of Life above
Withstand the storms tha see to shipwreck me
Come into port by the golden path of love.

Note: This poem was written by Sister Marybride Ryan during her junior year at Marywood Academy. The powerful imagery hints of her home in Ireland and the call that led her to become a Dominican Sister. 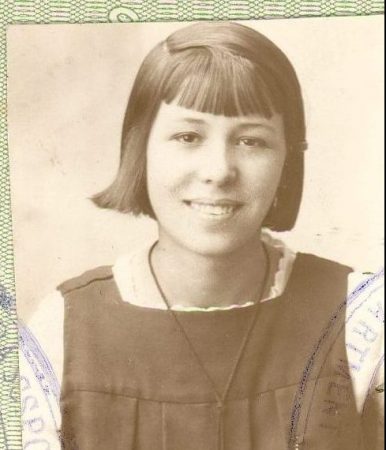 Like many vowed religious of the time, Sister Marybride Ryan (middle) returned to her home in Ireland for a visit after World War II.

Pictured are childhood friends and Dominican Sisters Mary Terence Power (later Sister Katherine) and Marybride Ryan. They returned to Ireland to visit their mothers in 1948.

Sister Marybride Ryan: Her joy in knowing that she was where she was meant to be was always present.