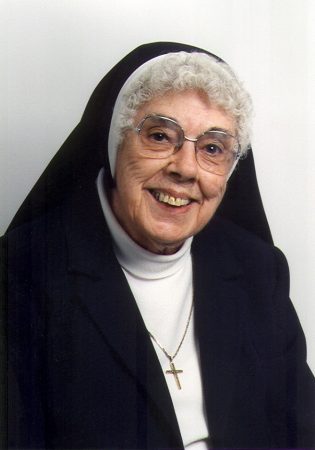 “Let the little children come to me. Do not hinder them. The reign of God belongs to them.”

For years Sister Yvonne Richard did just that–or as an older translation put it–she suffered them to come. Bending over desk after desk to encourage pupils, she never allowed the pain of her severe arthritis to keep her from the work she loved so well: teaching children to read.

Surely it is the very person of Sister Yvonne Richard that C. Jung had in mind when he wrote:”An understanding heart is everything in a teacher, and cannot be esteemed highly enough. One looks back with appreciation to the brilliant teachers, but with gratitude to those who touched our human feeling . . . . warmth is the vital element for the growing plant and for the soul of the child.”

Born in Alpena in 1917, Lucille Evelyn Richard was the fourth of seven siblings. Family life was close and faith-filled. Her parents walked to daily Mass and prayed the rosary daily.

Lucille’s education began in a public school as they lived too far from a Catholic school. When the family moved closer to St. Anne School, she attended there from Grade 2 through high school. She loved to help the Sisters after school, worked as a clerk in Woolworth’s, did housework and babysitting.

In her senior year, Lucille confided to Sister Borgia Hawkins that she wished to become a Dominican. Others who had attracted her to the congregation were Sisters Alphonse Mary (Helen LaValley) and Thomas Edward Kennedy. With a classmate, Eva LaMarre (Sister Thea), she entered Marywood in 1936 and began religious life under the direction of Sister Fabian MacDonald. At reception, she was given the name of Sister M. Yvonne of St. Catherine of Siena.

Soon Sister Yvonne was launched on a long ministry of primary teaching. For four years she taught 50 first and second graders at St. Joseph, Muskegon. In addition she taught Saturday catechism, did sacristy work, and First Communion preparation as well as various duties in the convent.
At her next mission, St. Mary Cathedral School, Saginaw, she spent 17 years teaching first graders. She was assigned to Holy Rosary Academy, Bay City, for the next seven years. Meanwhile, she completed her studies for a BA from Aquinas in 1959 and a Master’s in Religious Education in 1964. Her ministry for the next 20 years was at St. John’s, Essexville. She also taught at the Aquinas Reading Center for six summers.

In 1985, after 48 years of teaching, Sister Yvonne retired from the classroom and went to Immaculate Heart of Mary School, Grand Rapids, as a tutor in reading for K-4. In addition, she became a teacher’s aide, giving herself freely to assisting, correcting papers and tests and making flash cards, puzzles, and children’s games. Children were so eager to go to her for tutoring, that some of the children “faked” reading problems in order to visit her. Her solution was to add a reading enrichment session. At the end of one year’s critique, the principal said: “Pace yourself and don’t allow us to take advantage of your generosity.” Sister Yvonne’s position there continued for eight years. When the convent at Immaculate Heart was turned over to other uses, she moved to Marywood and commuted to her beloved students at IHM.

Those who have lived with Sister Yvonne found her prayerful, fun loving, uncomplaining, loyal to friends, and patient with pain and people. As for interests outside school, she was an avid reader and enjoyed playing cards, working jigsaw puzzles, making educational games, and doing housework, often taking on the chores of an absent Sister. She also liked to visit the sick and elderly.

She concluded an autobiography in 1995: “With deep gratitude, I thank God for being my constant companion throughout the years of my religious life. They have been full and happy years. I am grateful for being a Dominican Sister with all its spiritual and educational advantages and for the opportunity to teach God’s little ones.”

Sister Yvonne’s legacy is attested to by this message received from a woman who had been one of her first graders 51 years earlier, “I can’t begin to tell you how thrilled I was to find out that you are still living. I am married, have raised five children and have been a teacher all my life. You were my inspiration. I so clearly remember my first grade year with you and have strived to be just like you throughout my teaching career. I will keep you in my prayers and continue to try to be at least half the wonderful teacher you are.”

As Sister Yvonne had bent over countless little ones of Jesus, Jesus had always bent over her in love and power. On March 24, 2007, Jesus finally gathered her to a joyous reunion with the Alpena Richard’s, Grand Rapids Dominicans and all God’s children.

Sister Yvonne is survived by her sister Betty Ludlow and her brother Robert (Elaine) Richard of Alpena, MI, nieces, nephews, grandnieces and grandnephews, many friends and a loving Dominican Community.

We commend Sister Yvonne to your prayers.