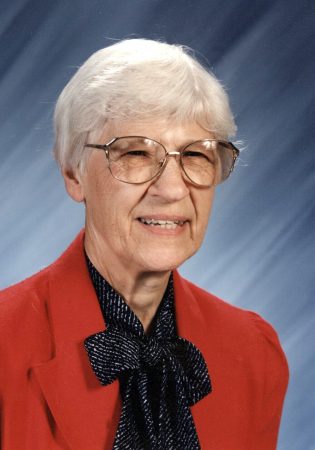 In one of her brief autobiographical sketches she shared this reflection: “I always had a fantasy as a child that I would marry a very rich man and I would take care of all the unwanted children. Well, I did marry a rich man and I’ve always loved and tried to be especially kind to my children in the classroom.”

Louise Fieber was born on October 5, 1915 on a farm in Shaw, Oregon to Charles and Magdalen Mehler Fieber. Her father was from Austria; her mother from Hungary. She was the sixth of thirteen children, eight boys and five girls. She was baptized at Immaculate Conception Parish in Shaw, Marion County, Oregon on October 24, 1915, and given the name Louise Mary.

Louise started school when she was six at Immaculate Conception School where she was taught by the Franciscans for four years. When she was ten, her parents decided to move back to Canada, to which the family had originally immigrated. Sister Winifred had vivid memories of this trip. Their furniture was shipped ahead, but the family journeyed to Canada in two cars. Car trouble extended the 1200 mile trip to two weeks as they needed to wait for car parts to be shipped in. She remembered the date of their arrival in Lampman, Saskatchewan: October 6, 1926.

When Louise was sixteen she spoke to her pastor, Father Ogle about her interest in becoming a sister. It was through him that she learned about the Marywood Dominican Sisters. She was one of the many Canadian girls that Father Ogle guided to Marywood. She met our Sisters Anna Plamondon and Elizabeth Rose Theisen at summer catechism classes, and she also made contacts with our Sisters at Melville, Saskatchewan.

Louise came to Marywood as an aspirant for her senior year of high school, and graduated in 1935. On September 6, 1935 she became a member of a large class of postulants under Sister Jerome Smither’s direction. She received the habit on August 4, 1936 and given the name of Sister Winifred of St. Dominic.

Sister Winifred was an excellent primary teacher. For nine of her years in education, she had the added responsibility of administration in the school and /or convent. Always a hard working person, she never spared herself. Most of her years were spent on small missions where one had to do everything.

No matter where she taught, she was always interested in the poor and in her later years she became involved in visiting and caring for older people who had no one. One sister on her faculty remarked, “She had such a pleasant way to make the children feel good about themselves.” Another note of gratitude from her years at St. Alfred School in Taylor read, “Your work with the children is done with so much love and concern that the children can’t help but learn and do well. You have the patience of Job and the willingness to be of any help possible for the benefit of all students. … Your beautiful attitude towards life and all people makes it a pleasure to have you around.”

In 1980 Sister’s educational interests shifted from the classroom to full-time tutoring. This she did very effectively until 1993, when she made Marywood her residence. Sister Winifred loved to be of service to others. Even her hobbies of baking pies, cookies and housekeeping chores were to be for the benefit of others. She also enjoyed reading, listening to music and walking.

Sister Winifred’s favorite Scripture quotation was from John’s Gospel: “The light is among you only a little longer. Walk while you still have it or darkness will come over you. The person who walks in the dark does not know where they are going. While you have the light, keep faith in the light; thus you will become children of light.” When asked about the significance of this passage for her, Sister responded that it is God leading us; we are not in the dark about anything; we are secure in knowing God is with us. And this has been true throughout her life.

Sister Winifred concluded a brief biography: “The thing that means the most to me in my Dominican vocation is that I have formed some very close relationships with Sisters and have experienced God’s love and care. I have always thought of myself as a servant willing to help in any way possible.” She added, “I am also grateful for the good health I’ve enjoyed throughout my years in Community.”

The years between her departure from the Canadian prairies in 1934 and her last days at the Marywood Health Center have been rich, happy and full.

On Sunday night, April 22nd Sister Winifred walked into eternity led by the God of the Prairies to her true home.

We commend Sister Winifred to your prayers.