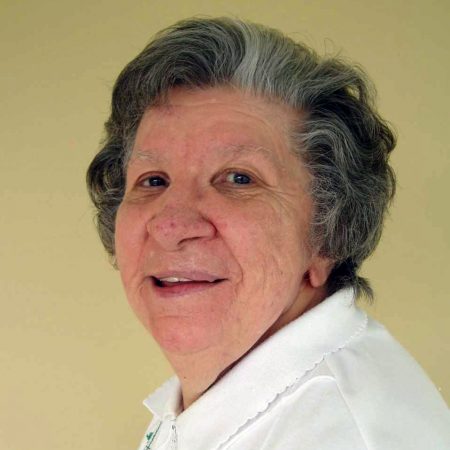 At the time of her Golden Jubilee in 1998, Sister Vita Licari wrote: “For fifty years, as mystifying as those words have been to me—that God should choose me—they have been my source of consolation and peace during the hard times and the reason for my gratitude and joy during the good times.”

The fourth of five children of Vincent and Maria di Lorenzo Licari, Vita was born on August 28, 1928. She had three older sisters, Bernice, Mary and Rose (who died in childhood) and one younger brother, named Vito. Her parents were from a small village near Palermo, Italy. The families of each parent had immigrated to America and it was here where the two met and later married after Vincent returned from his service in the army during World War I.
Vita’s entire education from primary school through college was with the Grand Rapids Dominican Sisters, first at St. Joseph School, then at Catholic Central High School and Aquinas College. In 1947 she entered the congregation at Marywood. At her reception the following year she requested and received the names of her parents and became Sister Vincent Maria until returning later to her baptismal name in 1969.

Sister Vita had a long ministry of more than forty years in primary and secondary education, beginning in 1949 at St. Mary, Gaylord, and including Holy Cross in Santa Cruz and St. Mary School in Belen, New Mexico; St. Joseph, Wright; Our Lady of Perpetual Help, Chesaning; St. Mary, Hannah; St. Mary, Lake Leelanau; Catholic Central, Grand Rapids; St. Michael, Maple Grove; Sacred Heart, Mt. Pleasant; St. Mary, New Salem; Our Lady of the Lake, Prudenville; Immaculate Heart of Mary, Grand Rapids; St. Mary Magdalen, Melvindale; St. Thomas, Grand Rapids; Marywood Academy; and St. Mary, Big Rapids. In several of these schools, including the last-named, she served as principal. In February 1988, she was featured in a newspaper article in the Big Rapids Pioneer during Michigan School Principals’ week. She expressed her conviction that education must be centered in strong Christian values which encourage personal growth fostered in mutual love and respect, truth and justice. She praised parents for their support and mentioned their work in renovating the school. Sister Vita earned her B.A. from Aquinas College in 1958 and her M.A. in Religious Education in 1966. She pursued further studies at Grand Rapids Junior (now Community) College and Western Michigan University. For four and one half years she was a lecturer of mathematics at Aquinas College and for another four and one half years, served as secretary and bookkeeper at St. Pius X Parish, Grandville.

Sister Vita moved to Marywood in 1993. As a person with skills in mathematics, an analytical mind and an interest in learning, Sister Vita earned no fewer than ten certificates of achievement in various software programs for the computer. These skills were useful in her later work in several capacities in offices at Marywood and the Marywood Health Center. She assisted in the archives department and served as assistant for special projects for the Councilor of Ministry for six years. In 2002, she volunteered in the Finance Office. Sister Vita’s interests included reading, listening to music, and working crossword puzzles. In her last months she particularly enjoyed artwork and participating in activities at Marywood Health Center, graciously accepting new limitations by finding new appreciation for the beauty of colorful drawings. She also enjoyed travel, and in 1978, she traveled with family members to Italy for three weeks, visiting the Vatican, the city of Rome itself and Sorrento as well as neighboring historic places. Trips with Dominican Sister companions included a five-day tour of New England and a week in Cancun, Mexico. At the time of her Golden Jubilee, Sister Vita expressed thanks for “the many Sisters who inspire me, encourage me, or share my life as friend. I thank and give praise to God for all these gifts, but especially for his Mother Mary, without whom I could not say yes to God, then– or now.”

May Sister Vita now know the consolation and peace that accompanies God’s own promise for His chosen ones.

Sister Vita is survived by her sister Mary Nowak and her brother Vito (Alberta) Licari both of Grand Rapids, MI; nieces and nephews, many friends and members of her Dominican community.

We commend Sister Vita to your prayers.

Sister Vita, Angelina Gonzales, Jean Reimer and two others in back row