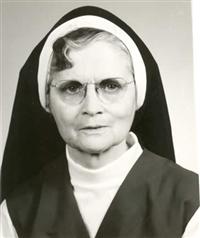 In imitation of the Good Shepherd, Sister Thomas Edward Kennedy devoted her talents and energies to meet the needs of the people she served as teacher, pastoral minister, social worker and friend.

Her cheerfulness, helpful ways, ready smile, Irish humor and patient endurance of suffering were important assets along her Pilgrimage. It all began July 13, 1909 in County Limerick, Ireland, on a farm “about five miles and a bit outside the city of Limerick,” when the third child of Edward and Kathleen Minihan Kennedy was born. She was baptized at Knockea Church and given the name Winifred Mary. With her three sisters and five brothers she attended the local National School. She continued her studies at the Sisters of Mercy School and then found a job in a store.

When her older sister, Bridget, became a Sister of Mercy in 1924, Winifred was not impressed. But after a time she concluded: “This (the store) is not the work the Lord wants me to do.” The possibility of religious life attracted her. She devoured missionary magazines and wrote to several communities. From her cousin, a Sister of Mercy, she learned that two American Sisters were in Limerick to tell interested women about their Dominican Community in Grand Rapids, Michigan. Later she wrote in her autobiography: “After I met the famous Sister Edith Welzel, OP, I decided immediately that her community was my choice.” Preparations were quickly completed. On October 2, 1929 Winifred accompanied Sister Edith aboard the SS George Washington from the port of Queenstown with other prospective candidates to begin the journey to America. Arriving at Marywood on October 11, 1929 Winifred entered the Novitiate. “During the early days things were rugged and time passed slowly. Soon, however, the days passed all too quickly.” She was soon assigned to North Dorr as a housekeeper. After receiving the Dominican habit June 26, 1930, and receiving the name Sister Thomas Edward of Jesus, she made her canonical year. She then returned to North Dorr to teach grades three and four. On August 30, 1932 she made her First Vows to Mother Eveline Mackey and on August 30, 1938 her Final Vows were made to Mother Euphrasia Sullivan.

Her studies at Davenport-McLaughlin College in Grand Rapids changed the pattern of her teaching ministry. Thereafter she was assigned to teach Commercial subjects in high schools: Catholic Central, Grand Rapids; St. Anne’s, Alpena; SS. Peter and Paul’s, Saginaw. During the summer months she continued her education to earn her Bachelor of Arts Degree. She was a dedicated teacher and her students have remembered her with fondness. She quickly entered into the work, prayer and play of religious life and often served as bursar for the convent. When there were symptoms of multiple sclerosis she went to Mayo Clinic in 1944 for a check up. The final report was encouraging and she faithfully followed the doctor’s instructions and recommendations. During the flu epidemic in Lake Leelanau she and Sister Anna were the only Sisters who remained healthy.

When Winifred Kennedy, boarded the America-bound steamship, waved to her family on shore, as a true foreign missionary, she supposed it was a final farewell. When she did return to Ireland in June 1948 she described the experience: “I didn’t go home for eighteen years and I didn’t know my brothers and sisters. My father had died two years earlier so I never saw him.” The two months spent with the family eased the pain. Eight years later her students at Merrill High School raised funds to finance another visit. In later years other opportunities enabled her to further enjoy her family including the new nieces and nephews. After her brother Patrick settled in Flint, Michigan, they kept in touch. He attended the funeral of their brother Dennis, who died in an automobile accident in Ireland June 6, 1980.

After thirty-some years of happy memories in numerous Michigan high schools, Sister Thomas Edward was assigned in September 1963 to St. Joseph’s, Saginaw. It could not be foreseen but this became “home” for her remaining active years. Changing circumstances in the parish necessitated changes to new programs to meet the needs of the people: Adult Education, and later classes and tutoring in the convent staffed by the Sisters and lay volunteers. When Sister Jordan Marie joined the staff in 1969 she fit perfectly into the changing programs teaming up with Sister Thomas Edward in teaching, tutoring and social work. “The twosome’s ‘social work’ served both parishioners and neighborhood residents. They visited hospitals, delivered food baskets, comforted bereaved families and counseled people who were “down-and-out.” On December 3, 1988 St. Joseph’s Christmas Dance gave special honor to Sister Thomas Edward Kennedy, OP for 27 years of service and to Sister Jordan Marie Homolka, OP for 19 years of service to the parish and the neighborhood.

In early 1974 Sister Thomas Edward developed severe facial pains that were relieved only in January 1975 when her doctor successfully used a new technique called electrocoagulation, which attacked only the pain fiber. She returned to teaching and in June flew to Ireland to be with her family when her sister Bridget from Australia made her home visit. Her mother had died in 1965, but she was grateful that she had seen her on previous visits. Her letters “from the other side of the Atlantic” showed her happiness, her eagerness to learn the results of the Chapter and to return to her apostolate in Saginaw. On August 2, 1984 her sister-in-law, Theresa Kennedy, took her on a surprise three-week visit to Ireland. Between times Sister Thomas Edward accompanied by Sister Jordan Marie enjoyed a short vacation in Florida and a trip to California.

The growing seriousness of her health problems diminished Sister’s ministries. She needed a cane and was no longer able to visit the hospitals, but she continued teaching. Her genuine desire to remain at St. Joseph’s, Sister Jordan Marie’s willingness to assist her and the happy approval of the Sisters in the house helped Sister Teresa Houlihan to decide to grant Sister Thomas Edward permission “to stay as long as you can.”

The year 1990 brought the observance of Sister Thomas Edward’s Diamond Jubilee. She enjoyed each celebration. Marywood invited Sister with her brother Patrick and family to join their festivities. When Bishop Kenneth Untener honored the Sister Jubilarians in Saginaw she was one of the three. She was the star of the triple celebration: Feast of St. Joseph, St. Patrick’s Day and St. Joseph’s Parish recognition of her sixty-years of Religious Life. The climax came when Sister Jordan Marie accompanied her on a wonderful ten-day visit to Ireland. Still filled with these glorious memories she realized that the time was nearing to faithfully live up to her assurance to Sister Teresa: “I look forward to Marywood when I can no longer keep going. I love Marywood. I have no fear of it. It is my home.” And thus she renewed the offering of her life to God, and continued to prepare for the day of entering her Eternal Dwelling Place to enjoy everlasting peace and joy.

Sister is survived by her brother, John Kennedy in Ireland; her sister-in-law Mary (Teresa) Kennedy in Davison, Michigan; nieces, nephews, cousins, many friends and a loving Community.

We commend Sister Thomas Edward to your prayers.