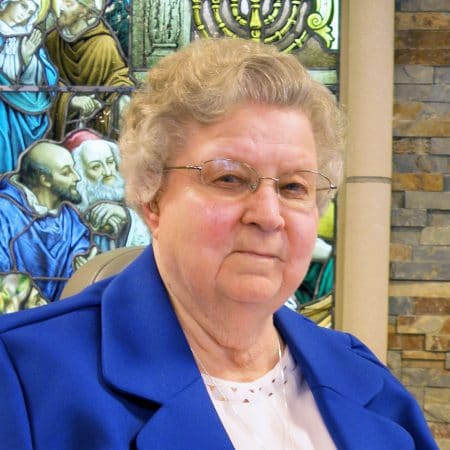 Theresa Marie was born on Christmas Day, December 25, 1927. She was a most welcomed gift to her parents and four older siblings. Her parents had suffered the loss of two other children before Theresa’s birth. They welcomed four more healthy children into their large, hardworking and happy family. Her father, Frank, had come to America from Poland and married her mother, Sophia Retzior from Vulcan, Michigan. The family lived on a farm near Hart where Theresa joined other members of her family working during the summer months on the farm and doing chores all year round.

Theresa first met the Dominican Sisters in her primary grades at St. Joseph’s School in Weare. Her high school years were at Marywood as an aspirant, that is, a young girl who aspires to join the community. This she did, entering as a postulant in September 1946. She was received into the novitiate the following year and was given the name Sister Agnes. In high school, she was named “Best All Around Girl,” a title which she lived out for the rest of her life. Unassuming and practical, Sister Theresa was a reliable teacher and willing participant in all that was asked of her.

After making her first profession of vows, Sister Agnes (later Sister Theresa) taught in schools throughout Michigan while continuing her education during the summer months. She earned a BA from Aquinas College, majoring in history. Later she received an MA with a specialization in Educational Psychology from Michigan State University. In the years that followed, she continued learning as much as possible as she studied gerontology, theology, and administration. Her teaching assignments included St. Joseph, Bay City; St. Andrew, Grand Rapids; St. Mary, Charlevoix; Immaculate Heart of Mary, Grand Rapids; St. Michael, Suttons Bay; St. John, Essexville; St. Anthony, Grand Rapids, and Mt. Carmel, Saginaw, where she served as principal. Although she taught a few years in the middle grades, her preference was always for the younger children in preschool and kindergarten.

When Mt. Carmel in Saginaw closed as a parochial school, Sisters Theresa and Mary Ann Otway remained in the area and served at the Saginaw County Child Development Center. Theresa taught in the Head Start and Day Care programs. Along with seven aides, Sister Theresa taught forty-five preschoolers. She found joy in watching the children develop and increase in independence, coordination and concentration.

In 1972 Theresa returned to St. Andrew’s School, Grand Rapids where she remained until 1982, when she was named House Coordinator at Marywood. During her six years in that capacity, major renovations were undertaken in the west wing and chapel area. With good humor and planned diversions, Sister Theresa helped the residents through trying times at Marywood. These included such challenges as relocating places for prayer and dining; using portable heaters and rest room facilities as well as emergency generators for electricity. While crews removed asbestos from the kitchen, residents had to settle for catered meals or trips to fast food restaurants. Through it all Sister Theresa maintained a spirit of calm and helped the residents gain perspective on the temporary chaos which was the daily experience of living at Marywood during the renovation.

These experiences prepared Theresa for her next ministry when she served as resident care director for Northview Manor for 5 years. Then she became Christian Service Coordinator and Director of Religious Education at St. Athanasius parish, Roseville. As Coordinator, Sister Theresa managed several programs that provided food for the poor, Christmas gifts for needy children, shelter and transportation for the homeless. She organized blood donations at the parish in collaboration with the Red Cross, worked with parishioners to package medical supplies for overseas missions, organized and provided funeral luncheons for the parish and supported Right to Life efforts with baby showers to provide needed supplies for new mothers and their babies. From the very youngest children to adolescents and adults, Sister Theresa worked with the pastor and other parishioners to provide services and opportunities to those in need.

When she retired in 1998, she enjoyed being a chauffeur and companion for the elderly Sisters at Aquinata Hall who needed transportation to various and sundry appointments. She was also noted for being a “Pray-er,” arriving an hour early for Mass or the Office to simply pray.

A woman of few words, Theresa was a dedicated and caring person who could get things done in an organized manner. Her favorite saying was “Lord, help me to remember that nothing is going to happen to me today that you and I can’t handle.” And together with her Lord and God, Sister Theresa handled it all.

At the time of her Silver Jubilee Theresa wrote: “Most important in my Dominican vocation is our prayer life and being able to serve and to be of service to others.” For her Golden Jubilee she wrote: “Celebrating 50 years of religious life is like the rising and setting of the sun. Each new day God has walked with me, even though at times I wandered on my daily journey. I have been blessed by the people who have touched my life, family, community and friends.”

At Aquinata Hall during her last years, Sister Theresa continued to serve the community as a receptionist at the entry of the building where she sat for hours greeting guests and making innumerable rosaries for whomever would want one. Sister Theresa, a gift to her parents on Christmas Day ninety-two years ago, has been a gift to all of us who knew her along the way.

Her warm smile and generous spirit will be missed by all.

Sister Theresa is survived by her sisters: Mary Cory of Roseville, MI and Barbara Frullani of Tucson, AZ; her sister-in-law Lorraine Bray of Grand Rapids, MI; nieces, nephews, many friends and a loving community.

We commend Sister Theresa to your prayers.

She has crafted thousands of Rosaries, praying over the beads as she works and sending the Rosaries off with the blessings of God and the Dominican Sisters.

Sister Theresa Bray is a greeter in the reception area of Aquinata Hall. We are so blessed by her bright smile and warm presence.

For her Golden Jubilee she wrote: “Celebrating 50 years of religious life is like the rising and setting of the sun. Each new day God has walked with me, even though at times I wandered on my daily journey. I have been blessed by the people who have touched my life, family, community and friends.”