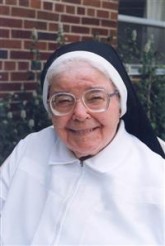 “How lovely is your dwelling place, O Lord of hosts! My soul yearns and pines for the courts of the Lord. My heart and my flesh cry out for the living God.” Psalm 84

Her earthly life had its beginning in Saginaw, Michigan on June 13, 1912 when she became the second oldest and the first girl born to Frank and Mary (Grenkowski) Brzeczkiewicz. There were seven children in the family, four boys and three girls. Her home was a very happy, Christian one and since both parents were of Polish descent, the customs and language reflected their Polish heritage. At the time of her Baptism at Holy Rosary Church, Saginaw on June 23, 1912, she was given the name of Rose Rita. The name seemed most appropriate for Rose Rita had rosy cheeks, attesting to her Mother’s admission that Rose was the healthiest of her seven children. On October 13, 1922, Bishop E. Kelly administered the Sacrament of Confirmation.

At six years of age Rose was enrolled at Wadsworth School where with her brother she walked the mile from home in rain, snow, and sunny weather. Later she attended the Dickman School. In 1922 she attended St. Rita School, which had just opened. That year she also made her First Holy Communion. Both at St. Rita and at St. Joseph, which she attended for high school, she was taught by our Sisters. Rose was so much impressed by the love and kindness of the Sisters that she thought of becoming one of them, a desire that grew more intense with the years. It was not until her senior year of high school, however, when she talked with Sister Jerome Smithers, novice mistress at Marywood, that she firmed up her decision to enter our Congregation.

Rose came to Marywood to enter the postulancy on September 7, 1930. She had just graduated from high school in June, but she did have some experience in the “outside world” clerking at Woolworth’s on Saturdays. Sister Jerome, whom she had met as a senior, was her novice mistress. On August 20, 1931, with much joy, she received the Dominican habit and the name of Sister Theodore Mary of the Infant Jesus. She was given the name because of Sister Theodora Jasinska, who had been her teacher and principal at St. Rita School. Her First Profession of Vows was made to Mother Eveline Mackey on August 22, 1933.

Immediately after her Profession of Vows, Sister Theodore Mary embarked on what was to be almost a half-century of unselfish involvement in Catholic education. Undoubtedly, because of her unusual adaptability, she was transferred many times. Many of her assignments were to two- and three- Sister missions both in rural and city settings where she taught three and four grades. Along with her heavy school program, for fifteen of her forty-eight years in elementary education, she was the superior and principal. And, for over forty of those years, she was the parish organist. Likewise, she readily used her fine singing voice in the parish choir.

In 1961 she was very happy to be missioned to Santa Cruz, New Mexico. It was necessary for her to become acquainted with New MexicO’s educational system while she also served as superior and principal. During that time she had multiple surgeries. The following year she was assigned to St. Rita, Saginaw. This should have been a happy assignment, as it was her home parish, however, it was to be the last year the Dominican Sisters served that parish, a sadness for Sr. Theodore Mary.

When Sister Theodore Mary ended her teaching years in 1981, she stayed on for three years at St. Alphonsus Convent and was very much involved in the choir and being of service to the Sisters there. In 1984 she came to the House of Studies; the following year Marywood became her residence. For four years at Marywood she was involved in the Health Care apostolate. Years earlier she had spent four summers taking care of her dear mother, and she felt this was a most helpful preparation for her work in health care. When not in health care, she was involved in other local ministries. She did a tremendous service to the prayer life of the Community by her faithful attendance at prayer and her rich supportive voice.

Sister Theodore Mary had an unusually pleasant and friendly disposition and personality, and was able to cope gracefully with many varied and difficult situations. She was much loved both in the convent and school. The parents were appreciative of all she did for their children. She was ever ready to help and was most congenial with others. A ready smile and a little chuckle were so characteristic of her. She was very close and devoted to her family. Well did she live out one of her favorite sayings, “Do to others as you would want others to do to you.”

Life, however, wasn’t all work for Sister Theodore Mary. If there was one particular diversion that gave her much pleasure, it was a good game of cards. And, of course, she enjoyed singing and playing the organ. Crocheting and working on different crafts and reading were also some of her diversions.

In a brief autobiographical sketch written recently, she reflected and shared the following: “My Dominican vocation has meant a great deal to me. Not only as a means of my salvation, but to help others save their souls. I have been blessed by God throughout my teaching years and would not have succeeded if He was not at my side always.”

Sister Theodore Mary had the privilege of assisting at many funeral liturgies. And, now how appropriate for her are the words of the Church’s, “In Paradisum”: “May the angels lead you into paradise; may the martyrs come to welcome you and take you to the holy city, the new and eternal Jerusalem. May the choirs of angels welcome you, where Lazarus is poor no longer, and you have eternal rest.”

We commend Sister Theodore Mary to your prayers.