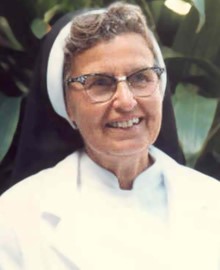 “I've come FULL CIRCLE back here to Marywood, and I am very happy.”

So, Sister Thea prefaced a report she was giving at a house meeting the evening of November 13. Never a waster of words, she meant all and only what she said. Her eyes twinkled in mock provocation as she poked a gentle jab at those who had taken advantage of her recent coming and elected her their floor counselor. That modest economy of words left few traces of the journey in the brief sketches and remarks she dutifully turned in. Friends will remember — and REMEMBER.

Peter and Exilda Robinette LaMarre, both of Canadian birth, settled in Alpena, Michigan to raise a family of ten children. “Faith, stability and strong moral values were the traits Peter and Exilda bestowed on their offspring,” wrote Sister. Fourth in line, Eva Belle was born June 26, 19 18, and baptized in St. Anne Parish July 7, 19 18. Staunch in their parish life and appreciative of the Catholic education afforded by their parish grade and high school, Eva’s parents were nonetheless no presumptuous dreamers. In her case, as she related, “no amount of faith readied them for her choice of religious life.” Hardly realistic, how could it be God’s choice? It didn’t help that a classmate, Lucille Richard (Sister Yvonne Richard), was openly declaring her intention to enter the convent. “You’re to blame for all this,” Mrs. LaMarre would repeatedly remark to Eva’s friend. All to no avail! That determination which would mark the life of a resolute Dominican woman had taken root. The final family challenge was the prediction that two months would be time enough — for testing.

With her brother Theodore on his way to enter St. Joseph Seminary in Grand Rapids, Eva left home September 6, 1936. As promised, her brother Richard and his wife appeared two months later to take Eva back to Alpena! They left for home alone. Eva had put her hand to the plough and would not look back. She stayed to meet new challenges, and to build from their conquests a soul secure and serene. On March 8, 1937, Eva received the habit of St. Dominic from Mother Euphrasia Sullivan and the name Sister Mary Thea of the Precious Blood. Following her novitiate under Sister Fabian MacDonald, she was professed March 10, 1938 and made her Final Vows August 6, 1941.

Second only to Sister Thea’s faithful commitment to the Dominican vowed life was her pursuit of educational excellence, while sensitive to each person’s human dignity. A dynamo of energy for work, she could as easily relax with a puzzle or garden and be renewed by her Common Life and prayer. Her close friends remember the “classy lady” who found such joy in good books against a background of classical music. Gifted with quick perception, she matched it by a wealth of determination, that could at times flare into a healthy feistiness to support a worthwhile issue.

Sister Thea was well known for her teaching and administrative skills throughout Michigan and New Mexico. She ministered at St. Mary, Muskegon; McKinley, Beaver Island; St. Mary, Gaylord; Our Lady of Fatima, Albuquerque and (full circle again) at St. Anne, Alpena. Following her retirement from schools and a precious sabbatical year of travel with her sister, Rena, Sister Thea worked four years for the Diocese of Palm Beach, Florida.

Was it time to come full circle? Sister Thea seemed to sense it was, and she asked to return to Marywood, where she delighted the community with her quiet joyousness, her easy lack of pretense, her precise pleasant perfection over the PA, and the enigmatic little smile that left behind a gift of wonder. Was that why she made her little speech, and told us the story of a visiting sister observing the respect of Marywood Dominicans for one another — of our unity in diversity? It made her proud, and she was compelled to say it. We remember it as her farewell and legacy.

Sister Thea was recognized as very ill while at a doctor’s office, and she was hospitalized immediately. Nurtured by the Church’s final blessing, surrounded by friends, Sister Thea quietly entered the presence of the God and the circle of the blessed.

We commend Sister Thea to your prayers.