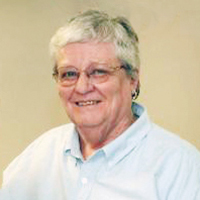 This scripture passage was one of Sister Teresa’s favorites, and loving God and neighbor was her lifelong quest.

The third of four children of Maurice and Marcella Vodde Gallmeier, Teresa was born in Grand Rapids, Michigan on August 31, 1939. She attended St. Francis Xavier School and Catholic Central High School. A variety of work experiences while growing up included clerking in a local drugstore, baby-sitting, and serving as a ward-helper and nurse’s aide at St. Mary’s Hospital. It was here that her first desire to become a nurse emerged.

Early in life, Teresa felt a call to become a Sister. Although she tried at first to ignore the call, she also began to explore the different orders of religious Sisters. Then a Dominican Sister arranged a meeting between Mother Victor Flannery and Teresa. Unaware that she needed the formal letter of acceptance, Teresa told Mother Victor she was coming to join the congregation that fall. Luckily, the letter of acceptance arrived September 5, 1957 just three days before she entered the congregation.

At reception Teresa took the name of Sister Deborah of the Immaculate Conception, the name by which she was known until 1998 when she took advantage of the option to return to her baptismal name. After making first profession of vows, she began studies in a school of nursing. Two months later, health challenges forced her to withdraw from the school.

Bolstered with confidence by the words of Sister Elizabeth Mary, she began again to study nursing, this time at St. Joseph Nursing School, Mount Clemens. Here she earned her license as a practical nurse (LPN), and later became a registered nurse (RN). She served most of her religious life in the nursing profession and was missioned at several hospitals in the Southwest, including Guadalupe Hospital in Santa Rosa, Nazareth Hospital and St. Joseph Hospital in Albuquerque, and Pioneer Hospital in Brawley, California.

In 1976, Sister Teresa began working for the Visiting Nurse Service in Albuquerque. Drawn to serve those nearing the end of life, she helped found the Hospice Program there. She was known for treating patients and their families with dignity and empathy and for providing the dying person with comfort and whatever assistance he or she required. Patients often addressed her as “daughter,” “angel,” “sister,” or even “my silly sis.”

In 1986, Sister Teresa returned to Grand Rapids and worked as a staff nurse/case manager for Hospice of Greater Grand Rapids. In recognition of her contributions in hospice nursing she was included in Who’s Who in American Nursing, 1996-1997.

After returning to Grand Rapids, Sister Teresa availed herself of the opportunity to complete a degree of Bachelor of Arts in General Education from Aquinas College in 1988.

Ever the caring nurse, Sister Teresa served the Helping Hands Hospice of Ionia and volunteered in neo-natal services at DeVos Children’s Hospital, Grand Rapids, where she was fondly referred to as the “baby whisperer.” Her strong, loving arms and gentle demeanor were able to quiet the most restless infant. One of her evaluations includes words of appreciation that adequately describe her entire life: “Teresa works above and beyond what the childcare volunteer position requires. She works in the infant room caring for the babies, nurturing and loving them. She brings gifts fundamental to our existence: a listening ear, compassionate heart and willing arms.”

For many years Sister Teresa suffered with depression and often sought comfort by walking in nature. On one occasion while meditating on Jesus’ crowning with thorns she felt him telling her that he knew all about mental illness and aberrations of the head and he suffered the crowning of thorns for them. Utilizing her natural talent for the visual arts, Sister Teresa found solace and meaning in icons as an “eye” into the meaning of the holy. Writing icons as prayer became a significant part of her life. She painted Jesus crowned with thorns and presented each Sister with a copy of the icon and a reflection on it.

Sister Teresa’s artistry included oil painting and pen and ink drawing. Her works were exhibited at Dominican Center. She also enjoyed arts and crafts, crocheting, swimming, fishing, gardening, the outdoors and nature. In her later years she reflected, “No matter what I have done in my life, my prayer life has been my sustaining force. In my Dominican life what means most to me is a sense of belonging and sharing in a community in which I can be myself in prayer, play and work.”

She is now reaping the benefits of her life-long quest of totally loving all and is held in the warm embrace of her loving Savior.

Sr. Teresa is survived by her brother Michael (Linda) Gallmeier of Houghton Lake, MI and her sister-in-law Judy Gallmeier of Grand Rapids; nieces, nephews, many friends, and members of her Dominican Sisters ~ Grand Rapids Community.

We commend Sister Teresa to your prayers.

Pray for victims of abuse

Utilizing her natural talent for the visual arts, Sr. Teresa found solace and meaning in icons as an “eye” into the meaning of the holy. Writing icons as prayer became a significant part of her life.

Sr. Teresa often displayed her art outside her room at Marywood Health Center