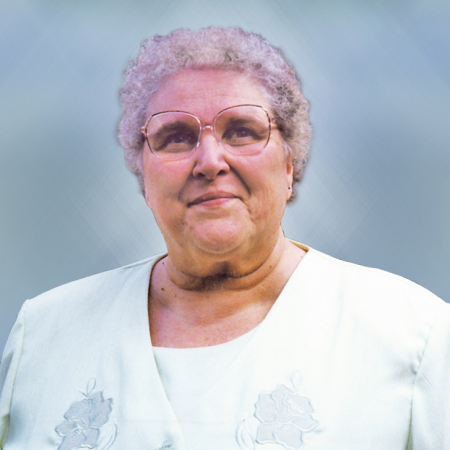 “This is what Yahweh asks of you: only this – to act justly, to love tenderly, and to walk humbly with your God.” Micah 6:8

This passage from Micah was one of Sister Suzanne’s favorites and she claimed it as her goal and mantra through many trials and challenges.

Carolyne Suzanne Eichhorn, the only child of Emmons and Estelle (Thibault) Eichhorn, was born May 10, 1930 in Bay City. She was baptized two weeks later at St. Joseph Church in Bay City and made her first communion at Holy Rosary Academy. Her father was an optometrist and her mother a registered nurse. During her years at home she had many opportunities to travel throughout the United States and Canada.

Suzanne graduated from Marywood Academy in 1948 and entered the Congregation in the fall of the same year. She received the name Sister Susan Eichhorn of our Lady of Confidence at the time of her reception. She then taught junior high school students at both Marywood Academy in 1950 and Holy Trinity School, Alpine Township, in 1951.

Troubled with orthopedic problems which necessitated knee surgery, Sister Susan left the congregation after four years, fearful of being a burden due to her mobility impairment. Nearly eight years later, Suzanne applied to re-enter the congregation and was gladly accepted. At the time of her Silver Jubilee in 1984, Sister Sue reflected:

Every journey is different and the one I set out on in 1948 had some very unexpected side trips connected with it! But for every step of the journey, I am grateful, grateful to have been with you for four and one – half years, grateful for the numerous experiences during my seven and one – half year absence (I possibly was with you in spirit even though I may not have realized it), and grateful for my years in community since early in 1960.

During her time away from the congregation, between 1952 and 1960 Suzanne attended Marygrove College, earning Bachelor degrees in Music and Voice as well as in Music and English. She had a powerful mezzo – soprano voice that soared to the heights and left her hearers moved and inspired. She studied further at Wayne State University, earning a Master Degree in Music; and she sang with the symphonic choir of the Detroit Symphony and the Michigan Opera Company. She also taught at Our Lady of Mercy High School and at Mercy College.

After reentering the congregation in 1960, Sister Susan taught in the Music Department at Aquinas College while earning a Master of Arts in Religious Studies simultaneously. For three years she took postgraduate classes in the performing arts at the University of Michigan.

In 1967, she requested a return to her baptismal name, and became known as Sister Suzanne.

More orthopedic problems necessitated surgery, and Sister Suzanne became a resident at Aquinata Hall to recuperate. After recovery there, she became the administrator at Aquinata Hall until 1975.

An internship in Spiritual Direction at the Detroit Center for Religious Development led to a four-year commitment as director of Emmaus House located at St. Mary Magdalen Parish in Melvindale, Michigan. Along with her colleagues, she offered programs including retreats, spiritual direction, workshops and prayer. Her growing gifts in spiritual direction led her to service at the St. Francis Retreat Center in DeWitt, Michigan where she served as Associate Director for twenty-one years.

Sister Suzanne loved the beauty of the outdoors — early spring growth, flowers, birds, lakes and running water. Her interests were many and include meaningful conversations, thoughtful books, movies of substance and crossword puzzles. She was grateful for her many friendships and treasured above all the privilege of being a part of a vital community. While recognizing the many advantages she had in life outside of the congregation, she claimed community life itself as the most deeply significant part of her Dominican vocation. In 1997, she reflected on her life and what was important to her, penning this message to her sisters, friends and colleagues:

“ . . my life has not been the important thing, but it is YOU who have been important to the making of my life. You have made it fruitful and happy and it has been a privilege to have shared it with you in and through the Lord Jesus and our Dominican Congregation. My soul has been deeply touched by you, by supportive and loving friends, by God’s people with whom I have worked and walked, and by our gracious God who continued to call and support me on the way. It has been a valuable and valued journey. If I need your forgiveness, I beg it. I know that I need your generous and loving prayers. My love and gratitude. Sue.”

A terrible car crash in the fall of 2009 hastened the decision for Sister Suzanne to retire from her beloved ministry in DeWitt and move to the Marywood Campus where she would have the assistance she needed. After recuperating from her injuries, she continued to serve as a spiritual director. She was revered as a “calm authority . . . a dear, kind, loving soul who knew how to listen.”

Gifted and generous with time and talent, Sister Suzanne will be missed.

Sister Suzanne is survived by cousins; many friends; and members of her Dominican Sisters ~ Grand Rapids Community.

We commend Sister Suzanne to your prayers.

Pray for an environment of inclusion for all God’s people

Suzanne Eichhorn, OP and Larry Slager met as spiritual director and directee at Dominican Center in 1996. Larry discovered Sister Sue to be a “calm authority and so grounded in this teaching.” He would come to know “this dear, kind, loving soul who knew how to listen.”

Sister Suzanne preaching at the St. Francis Retreat Center in 1999

When Sister Sue retired from her ministry at the St. Francis Retreat Center in DeWitt, Michigan, nearly 20 of her directees decided to follow her to Grand Rapids for their sessions.

It filled Sister Suzanne “with awe knowing that they continue to see the value of spiritual direction in deepening their relationship with God and others.”

Sister Suzanne with her parents in 1951