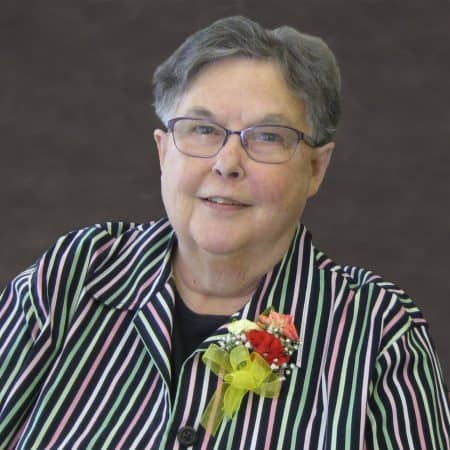 “Yes Lord, here I am. Yes to life’s unfolding mystery; Yes Lord, to daily dyings and risings, here I am.”

This was Susan’s favorite quote and guiding inspiration her entire life.

Born in Alpena, July 1, 1947, Susan Marie was the only child of Donald and Shirley Keller, and was baptized at St. Anne’s Church in Alpena on July 13, 1947. When she was three years old her mother died and she was raised by her maternal grandparents. Her father, who was a crane operator at the Alpena Cement Plant, spent as much time with her as he could, especially on weekends.

In grade school at St. Anne’s, Susan easily made friends, enjoyed a good time, and early on showed leadership ability. She took delight in music, joining the children’s choir in grade four and learning to play the cornet in grade five. Church activities were a big part of her life, and she enjoyed assisting the Sisters with sacristy duties. She had a way of engaging people of all ages, peers, adults, and especially the elderly. Her enthusiasm for life was evident and her friendliness and outgoing demeanor earned her the “Sunshine” award in the eighth grade.

At Alpena Catholic Central High School, Susan was involved in numerous activities. She continued with choral music, joined the marching band and was on the yearbook staff. One of her gifts was organizing people for work events: sacristy, cleaning the convent chapel, teaching CCD, helping with the sodality and the weekly church bulletin. A major accomplishment in her senior year was bringing about an exchange program with St. Joseph’s High School in Saginaw. She orchestrated busloads of students visiting each other for a wonderful cultural exchange.

Characteristically, she entered the community a day early – September 7, 1965, because she wanted to get there as soon as possible! At her reception on June 8, 1966, she took the name of Sister Lee Ann, which she kept until returning to her baptismal name in 1970.

After a few months at the House of Studies at Aquinas College, she was sent to St. Andrew’s School to teach, again getting the jump on her classmates at Marywood, who remained for an additional year. For twelve years Sister Lee Ann/Susan taught in elementary schools: St. Andrew and St. Stephen in Grand Rapids; St. Josaphat and Sacred Heart in Saginaw; St. Joseph, West Branch; and Our Lady of Perpetual Help, Chesaning.

In 1976 she received her B.A. in sociology from Aquinas College, and later her M.A. in elementary administration from Central Michigan University. She then went to St. Thomas, Grand Rapids, as a fourth-grade teacher and administrative intern, and to St. Joseph, Pewamo as principal/teacher.

In 1979, having been certified as a social worker, Sister Susan began a new ministry at Villa Elizabeth Nursing Home as director of pastoral and social services. In 1989, she became program coordinator for Home of Hope, a collaborative effort of Hope Network, Hospice, and GRACE (Grand Rapids Area Center for Ecumenism), with a mission to bring hope and care to terminally ill patients without primary caregivers at home. In an interview in the Grand Rapids Press, Sister Susan was quoted: “I have to say I’m very happy with my work here. I like helping people who are helpless. I like being here to support them when maybe they’re very alone and feel they’re not worth much. There is a need for people out there who want to die with dignity, who don’t have a primary caregiver in their home.”

Sister Susan continued to work with terminally ill people through 1995. Her reflection at that time was: “I’ve always been philosophical — live each day to the fullest. The more I’m exposed to this, the more I realize you have to live each day as if it’s your last.”

She enjoyed her ministry at St. Pius X Parish in Grandville, Michigan as Minister of Pastoral Services – a position which she held until 2004. Then she became an outreach advocate for Sisters both at Marywood and for those out on the missions who needed her support. She enjoyed offering her pastoral care and organizational skills for seventeen years at Marywood; in fact, she regards this as her most rewarding ministry.

In the winter of 2017, Susan fell ill, and after many tests and much patient waiting, she was diagnosed with a terminal illness. She received the news with equanimity and a peaceful heart. Sister Susan knew the experiences of loss and of suffering; she used both to live a life of expansive generosity and compassion. She will be greatly missed.

Sister Susan is survived by cousins; many friends and members of her Dominican Community.

Srs Susan and Verona Wangler regularly check up on and visit with several older adults unable to leave their homes.

“This red maple is a gift to the Congregation in memory of my father and mother, Don and Shirley Keller, and in honor of my 50th Jubilee. It’s our `family’ tree. Watch for the Red Maple budding in the Spring and bursting into color next Fall.” — Sr. Susan Keller