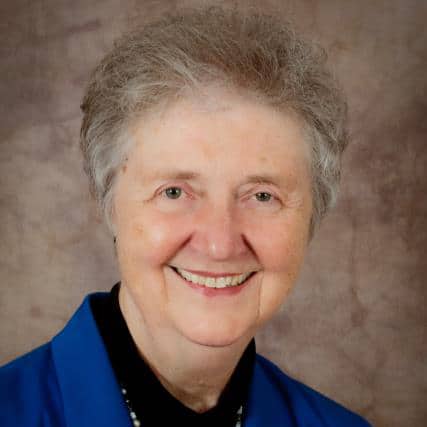 There was a confirming moment of grace when I knew deep down that God had lavished me with a love that desired to be extended inclusively. My heart and hand are yoked with God, and together we reach out to touch and be touched by marvelous folks who share the pilgrim journey.

Born June 13, 1940 in Detroit, Susan Ann was the first of four children of Edward and Theresa (Kenjorski) Truszkowski. Her father later changed the family’s surname to Tracy. A brother, Edward “Jerry,” and two sisters, Carol and Janis, completed the family who grew and prospered in the Detroit area. From her earliest years, Susan was an outgoing, joyful child who was a ray of sunshine to her family and all who knew her. Each member of the family was in some way involved in the world of health care and Susan was very comfortable around hospitals and the medical world. Such familiarity would serve her in good stead in ways she could never have imagined as a buoyant young girl, for she would come to know the hospital world from the side of both patient and pastoral caregiver in the years ahead.

Susan’s elementary education was in Goodale Public School, followed by four years at Dominican High School with the Adrian Dominican Sisters. While in high school, Susan worked at St. Francis Hospital in Hamtramck and assisted in her father’s radiology practice. Family life was enriched by many close friendships.

Attracted to religious life at an early age, Susan was greatly relieved to discover that the Servite Sisters she so admired, really were human! This discovery came about when young Susan chanced to see the ankles of the Sister she so admired, thanks to a gust of wind which lifted the hem of the habit “just enough.” With this new knowledge the child was determined to become a Sister.

Her parents were adamant that she wait before deciding that course for her life. After four years in an all-girls high school, they insisted that she spend a year at a coeducational college. That proved to be God’s way of introducing her to the Grand Rapids Dominicans at Aquinas College. She found them approachable, hospitable, and down-to-earth. “I sensed I could be myself and develop the God-given talents I had,” she reported. In September 1959 Susan entered the Congregation at Marywood, taking final vows in 1966.

Sister Marie Susanne, as she was known then, completed her B.A. at Aquinas in 1965 and received a certificate in Religious Studies from Aquinas Institute of Theology (1968), an M.A.in Religious Education from Aquinas College (1971) and two certificates in Clinical Pastoral Experience (1980 and 1989).

Her early years of ministry were in teaching, first at St. Francis, Traverse City, then Marywood Academy and St. Stephen’s in Grand Rapids. Appointed Congregational Vocation Director in 1973, Sister Sue served in that capacity for six years, adding Communications Director for the Congregation in 1977.

For the next four years, Sister Sue served in small parishes in the northeast part of the lower peninsula of Michigan, namely: St. James in Whittemore, St. Pius X in Hale and St. Francis of Assisi in Glennie. The next assignment was at the Catholic Shrine in Indian River where Sister Sue served from 1985-1987.

The draw of hospital work called Sister Sue to CPE training (Clinical Pastoral Experience) in 1988 at Bronson Methodist Hospital in Kalamazoo which was followed by eight years in Pastoral Care as a hospital chaplain and Director of Pastoral Care at Mercy Hospital in Toledo, Ohio. Her time in Toledo was formative as she grew to love the ministry of hospital chaplaincy. She enjoyed a sabbatical year in 1997-1998 first at the Siena Spirituality Center, Water Mill, New York, and then at Sophia Center, Holy Names College, Oakland, California.

After a stint at Dominican Center at Marywood in holistic health services, Sister Sue continued her cherished ministry in chaplaincy at Spectrum Health in Grand Rapids. Here she served as chaplain and also ministered as a much sought after public speaker from 2000-2015.

Sister Sue coped with cancer no fewer than six times in her life. In her journey with cancer, she was a model of courage and hope, inspiring countless cancer patients in their own experience of living with this illness. During her many treatment protocols, Sister Sue was never passive; rather she was conversant in the medical terminology and a full and active participant in all medical decisions. An avid and prolific writer, Sister Sue kept a detailed calendar journal, and she penned many articles and booklets, especially for cancer survivors. In her writing and speaking engagements, she often used humor as one means to cope with the pain, fatigue, and fear that accompanies the diagnosis of cancer. Cancer did not define Sister Sue; it deepened her zeal and gratitude for life, which overflowed into inspiration for many.

About her life as a Sister, Sue said “it has been the best way for me to love and serve God and God’s good people.” Later, during one of her bouts with cancer, she remarked: “Lord, You invite me to ask for what I desire. I want to live well and learn all I can on this present path even though it’s scary. But it’s comforting to know that You want to walk with me one breath, one blink, one swallow, and one heartbeat at a time.” Without ignoring the painful and lonely moments that are part of our human condition, Sue expressed deep gratitude for her life and her call to be a vowed woman religious.

Sister Sue enjoyed life, people and traveling with family and friends. She recalled with great enthusiasm her travels in the United States, Europe and the Holy Land.

In one of her hospital leaflets on choosing one’s own epitaph, Sister Sue summed up in four words how she wanted to invest her energies and be remembered after her death: LIVE, LEARN, LOVE, LAUGH. In tribute to her love of alliteration, we add that she did all FOUR to the FULLEST: in FAITH.

Sister Susanne is survived by her sisters Carol (Roger) Carr of Palmyra, Virginia; Janis Young of Maynard, Massachusetts and her sister-in-law Mary Ann Tracy of Kingsville, Ontario; nieces, a nephew; many friends and members of her Dominican community.

We commend Sister Sue to your prayers.

Sister Sue while teaching on Academy side at Marywood

Sister Sue talking at the General Assembly of 1997