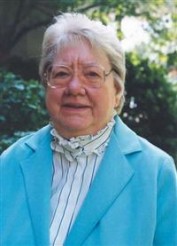 “I can do all things in him who strengthens me.”

This verse from St. Paul was one of several that Sister Simon Schulist quoted at the time of her Silver Jubilee. Indeed, her whole life was a series of “things” she was called on or volunteered to do.

Dorothy, born March 16, 1928, was the fourth of five children of Simon and Regina Wojak Szulist (the original spelling of the name). Her parents were born in Polonia, Wisconsin but had moved to Muskegon. Dorothy had two brothers and two sisters, one of whom later joined the Sisters of Mercy.

Dorothy attended St. Michael’s for grade school and St. Mary’s for high school. She had considered becoming a religious, but put the thought away. For about five years after graduation she was employed in laundry, factory and office work. She also traveled to California, Canada, and states near Michigan. When a fellow office worker retired after 30 years, she began to question her own future and said to the Lord: “If you want me to be a Sister and do more with my life, send me some information about Sisters and I’ll enter that order.” She added that if she did not receive any information by Tuesday, on Wednesday she would start looking for a man. No mail came on Saturday, Monday, or Tuesday. Then at a Sodality square dance on Tuesday evening a high school student brought her a Marywood Messenger from Sister Eucharia. “So I entered two months later on January 27, 1952.”

On August 16, 1952 Dorothy was received into the novitiate as Sister Mary Simon of the Good Shepherd and a year later was professed. Without preparation for teaching, she was missioned to St. Philomena School, Beal City. That was the beginning of 23 years as a teacher in schools throughout Michigan and in Santa Cruz, New Mexico. “I lived under very tense situations but since I had no doubt that this is my vocation I never had the desire to leave.” During summers she worked toward a bachelor’s degree from Aquinas College and then took classes on the master’s level.

In 1975 Sister Simon took on a new “thing.” She moved to the House of Studies and became a licensed cosmetologist. She was house bursar, provided hair care and driving services, and worked toward Nurse’s Aide certification, which she received in 1983. Then she spent two years working in foster care homes: Timberview Village, Frederic; and Gales Adult Foster Care, Whitehall and Muskegon.

Beginning in 1985 Sister Simon resided at Marywood. For six years she served at Aquinata Hall, first in the sewing department and later as director of personal needs. In 1991 she became an accounting clerk in the Congregation’s Finance Office. When time for retirement approached, she began assisting in the Archives Office and became a data input operator.

Sister Simon was devoted to her family. In her Mother’s last illness, determined to keep her at home, she commuted to Muskegon on weekends to assist in her care. Then she moved back to Muskegon for the final year of her Mother’s life, taking with her a computer on which to compile mission lists from the early twentieth century. During this time Sister Simon coped with her own cancer with a complete confidence in God’s healing touch. She saw it as one more “thing” to do with God’s strength to support her.

Those who knew her well describe Sister Simon as generous with her time, hospitable, and always happy to help. She was an excellent cook and seamstress and enjoyed knitting, crocheting, needlepoint and crafts of all sorts. Her room was packed to the door with boxes of craft materials, which she shared with anyone who needed them. She showed originality in altering patterns and creating new ones. She had a knack for repairing broken implements – fans, lamps, typewriters, and sewing machines.

Sister Simon was sensitive to the needs of others and volunteered to help those who needed assistance, e.g., with computers. She was called a guardian angel in disguise by Sister Christopher David Rizzon, MC, who spent months at Aquinata Hall recuperating from a flare-up of multiple sclerosis. The two became part of each other’s extended families. “Sister kept to herself in many ways but her eyes always noticed the needs of her retired Sisters.”

As death approached Sister Simon was comforted by her sister Sister Flocella’s presence, the help of hospice, and the love and prayers of her community. On December 27th, the feast of St. John the Evangelist, she heard her Good Shepherd call her name and say: “See, I am making all things new.” (Rev 21:5)

We commend Sister Simon to your prayers.