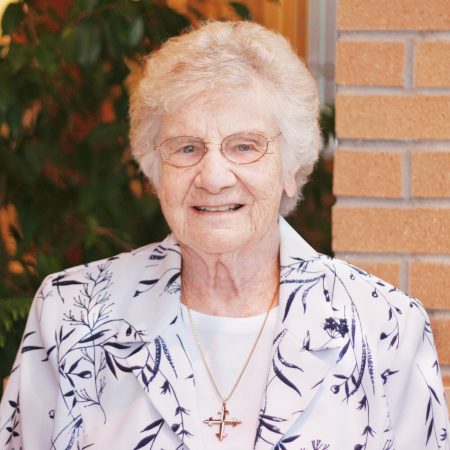 Most important to me . . . is the joy I have experienced in being able to do the work in life that I feel called to do, with the support of the community.

Rosemary was born in Muskegon, March 20, 1927, the third of six children of Bernard and Ella Valley Homrich. Her brother Eugene, with whom she was very close, became a Holy Cross priest, serving as a missionary among the most impoverished people in Bangladesh. Rosemary attended St. Joseph School in Muskegon, graduating in 1945.  She said that she always appreciated the joy and kindness she saw in the Grand Rapids Dominicans who were her teachers.

After high school Rosemary entered Mercy Central School of Nursing, earning her R.N. in 1948. Soon after, on October 1st of that year, she entered the Dominican Sisters at Marywood.  At the time of her reception she received the name Sister M. Veritas of the Son of God, which she kept until returning to her baptismal name because she felt people had a difficult time pronouncing or remembering Veritas. Following her first profession, she put her nursing skills to use at Nazareth Sanatorium in Albuquerque, New Mexico and then at the Marywood infirmary for one year, at which time she also studied at Nazareth College in Kalamazoo where she earned a B.S. in nursing.

Returning to the Southwest, Sister Rosemary worked as a nurse at Pioneers Memorial Hospital in Brawley, California and at Guadalupe General Hospital in Santa Rosa, New Mexico. She soon used her administrative skills as well as nursing at Valley Oasis Convalescent Home in El Centro, California. Ever seeking challenges, she went to Puerto Rico for study in 1964 to prepare to join the congregational mission in Chimbote, Peru, where she worked as a nurse and improved her facility in the Spanish language.

After returning to the United States, Sister Rosemary served as administer and surgical nurse at both Pioneers Hospital in California and Guadalupe Hospital in New Mexico. To further her skills in midwifery, she studied at Tufts-Delta University Nursing Program, Mound Bayou, Mississippi and at Hyden Hospital, Kentucky where she became a certified nurse-midwife. She practiced midwifery in Mississippi, Kentucky, and New Mexico. She was a stalwart support for mothers giving birth in sometimes very poor and austere conditions. She found great joy in this work and remarked that the miracle of birth never ceased to amaze her. It was, she said, “a miracle every time!”

After a brief period back in Grand Rapids with the Kent County Health Department as a public health nurse, Sr. Rosemary returned to Albuquerque to work as a nurse-midwife.

In 1983 Sister Rosemary had a sabbatical year at the Desert House of Prayer in Cortaro, Arizona. She then returned to the University of New Mexico, Albuquerque. Here she could continue her practice as a nurse-midwife, assisting in the delivery of the babies of indigent and Native American families, and of military families at Kirkland Air Force Base. Although Sr. Rosemary always relished the challenge of difficult assignments, she eventually found the 24-hour on-call position beyond her stamina and requested a change.

After full-time study at the Incarnate Word College, San Antonio, Texas, Sr. Rosemary received an M.A. in Religion. She also completed a course in the Hispanic Pastoral Ministry Program at the Mexican American Cultural Center to prepare her to work in Hispanic parish ministry. She worked in pastoral ministry first in Bloomfield and then in Albuquerque, while assisting as needed on weekends as a midwife – her favorite part of nursing.

Her final years in the southwest took place in Albuquerque where she served as a home care hospice volunteer for Presbyterian Health Care. In 2006 she retired from full-time ministry and made another transition – this time to Marywood, serving part time in the health center office and at Dominican Center as a hospitality volunteer.

Her nursing colleagues describe Sr. Rosemary as both hard working and outspoken. She had high expectations for herself and those who worked with her. She was self-assured and confident in her nursing and administrative abilities. These attributes conveyed a sense of safety and security to her patients and colleagues. “She knew what to do, and went ahead and did it,” said one of her nursing companions. Another reflected that Sr. Rosemary had the heart of a missionary, always seeking the hardest jobs and giving 100%. Although she showed a gruff exterior, she had a deeply tender heart, recalled another.

Sr. Rosemary had little time for hobbies, but she did enjoy hiking, horse-back riding, and needlework of all kinds. “I have had a wonderful, meaningful life,” she wrote. “My community has always been supportive and saw me through some very difficult times. I have been grateful to be able to work in nursing, even in my early years when I entered a teaching community.”

As the end of her life drew near and memory began to fade, Sr. Rosemary was ready, willing, and able to assist, to visit, to pray with and for anyone in need. Surely, she was welcomed into Paradise by her dear brother with whom she shared a missionary’s heart and who predeceased her by just three months. Both now rest from their labors in God’s mercy and love.

Sister Rosemary Homrich is survived by her sister, Pat Homrich of Fort Wayne, IN; her sister-in-law Barb Homrich of Defiance, OH; nieces, nephews; many friends and members of her Dominican Community.

“I have come that they may have life and have it more abundantly.” -John 10:10

We commend Sister Rosemary to your prayers.

Pray for the missionaries in foreign lands

Sr. Roseary practiced midwifery in Mississippi, Kentucky, and New Mexico. She found great joy in this work and remarked that the miracle of birth never ceased to amaze her. It was, she said, “a miracle every time!”

Sr. Rosemary enjoyed planting in the garden each Spring at Aquinata Hall.