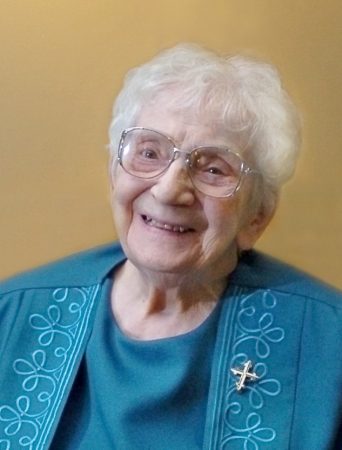 In 1975 Sister Rose Miriam wrote: “I had determined before entering the convent that, were I to be placed in the educational field, I would strive to make my efforts serve as so many spring boards that might unleash the right brain of students.”

And so it was that Sister Rose Miriam became a teacher of renown at every grade level from first through high school. Wherever she taught, the students remembered with happiness their time with her. Her teaching did provide a spring board that unleashed the creativity and confidence of her students. In the many dramas that she wrote, directed and produced, her students sang with “full throated voices.” Such was her ability to draw out the best from every student she taught at every age.

Life began for Sister Rose Miriam, the former Marie Visner, on August 16, 1903 in Muskegon, Michigan, the fifth of six daughters born to Thomas and Elizabeth Gallup Visner. Three boys did not survive early infancy. She was baptized at St. Mary’s Church in Muskegon, receiving the name of Marie Rose. Six months later, the family moved to Grand Rapids. She began school at St. Andrew’s and later on attended St. Alphonsus and Catholic Central High School. At the time of her death Sr. Rose Miriam was the oldest living graduate of Catholic Central High School.

Sister Rose Miriam recalled her childhood as a very happy one, but marked with tragedy when in the early 1920’s her father died suddenly and her mother passed away only five months later. At the time two of her sisters had already joined the Dominican Sisters. They were Sister Joachim and Sister Perpetua Maria. Marie and her sister Cecil (later to be Sister Elizabeth Mary) soon went to Chicago to work and pursue their careers – Marie in dancing and Cecil in vocal music.

After eighteen months in Chicago, Marie realized God had other plans for her. Of this she wrote, “The Hound pursued me constantly, following me when I would have fled Him, so that on Easter night, 1924, I surrendered to His promptings and began to make plans for leaving the world.” (The previous words make reference to the poem The Hound of Heaven by the poet, Francis Thompson.) Marie wrote to her sister back home in Grand Rapids in 1924: “I have known my vocation for nearly two months, and last Sunday night, Easter night, told Cecil my intentions, only to hear that she, too had the same thoughts and desires as myself.” So it was that these two Visner sisters became the third and fourth members of the family to join the Dominican Sisters.

The date of entrance for both Marie and Cecil was July 24, 1924. Sister Rose Miriam made her first profession of vows to Mother Eveline Mackey, the newly elected Prioress General, on August 23, 1927.

As a second year novice, Sister Rose Miriam began her teaching profession, which would eventually span 50 years. Of these years she wrote, “My classes, within my years of teaching, ranged from first through twelfth grade, no grade excepted. With each new assignment I loved teaching that particular age group. I served as a teacher and principal and director of the House of Studies.” Her educational apostolate took her to the following missions: St. Mary and SS. Peter & Paul, Saginaw; St. Anne, Alpena (three different intervals); St. Mary Magdalen, Melvindale; Sacred Heart, Muskegon Heights; St. Thomas, Catholic Central, and St. Stephen, Grand Rapids; and St. Mary, Gaylord.

Sister Rose Miriam was a marvelous teacher who had an outstanding influence on her students. Her years at St. Stephen’s were notable for the artistic achievement of her students. For a number of years it became legend that the grade seven students would produce the Christmas pageant and grade eight the Easter pageant. Sister had the ability to work with forty-five to fifty-five students who lived each of the liturgical dramas. Sister Rose Miriam was the author, director, and moving force! Her productions were a beautiful form of prayer; she never tired of helping students prepare for a liturgical function. Sister herself had a great love for the liturgy. This interest was sparked when in 1929 she had the privilege of attending Collegeville, Minnesota with the Benedictine monks; then, too, her years studying theology and scripture were very meaningful to her.

From 1977-1982 a new apostolate awaited her at St. Joseph, East Tawas, where she brought much hope and joy to people who were shut-in or hospitalized. There she conducted a monthly prayer service at the Medical Care Facility and at the Provincial House Nursing Home. Always a teacher, she conducted weekly adult scripture classes for all who desired to come. Although Sister Rose Miriam never learned to drive a car, she was a familiar sight to the people of East Tawas as she peddled about on her three wheel bicycle to the homes of parishioners to bring them Holy Communion.

In 1982 Sister Rose Miriam moved to Marywood where she continued to offer her services wherever and whenever they were needed. She also became a companion and helpmate to her biological sister, Sister Perpetua Maria who had been ill for many years and in residence at Aquinata Hall.

Sister Rose Miriam had a great appreciation for our Dominican way of life and was grateful for her religious vocation. Her love for God, which had its beginning as a tiny child, was great indeed. Likewise Our Blessed Mother had an important place in her life, and of this she wrote, “I cannot close this account without a word of praise and thanks to Mary who has always been my life, my sweetness, and my hope. It is she who taught me to keep the secrets of the King. She is and always will be truly my Mother.” May Mary now have a special place under her mantle for all the Visner daughters who served the Church, the Dominican Order, and our Grand Rapids Community with great love, goodness, generosity, and fidelity. The Lord of the Dance welcomed Sister Rose Miriam into Heaven with all the martyrs, and saints and sisters, both family and others, on January 20, 2010 when Sister Rose Miriam breathed her last breath surrounded by loving nieces, sisters and friends.

Sister Rose Miriam is survived by her nieces, nephews, friends and Sisters in her Dominican community.

We commend Sister Rose Miriam to your prayers.

Taken in New Mexico in 1957. The sister in front is Perpetua Maria and in the back from left to right are Sisters Rose Miriam and Elizabeth Mary

Sister Rose Miriam on her 90th birthday in 1994