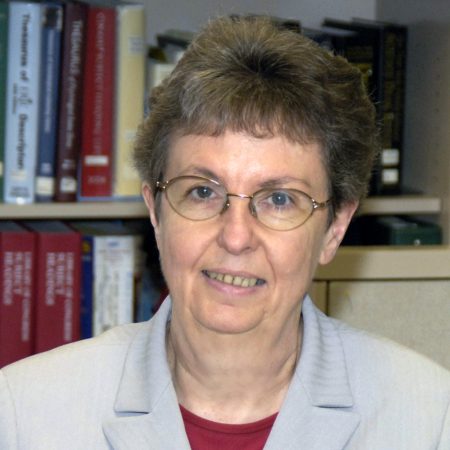 “...treat each moment of your existence as an assignment from God. Everything you do is important in the eye of God.” - Reflection among Sister Rose Marie’s papers

Rosemary was the first of two children born to Julius John and Amelia Helen (Schmidt) Martin. She was born on February 28, 1942, baptized in March and confirmed ten years later. Six years after her birth her brother Gerald was born, and the little family flourished quietly and securely on a farm in Beal City.

All of that changed with the death of her dear father as a result of an automobile accident in 1961. Rosemary was very close to her father and his death was a difficult time in her life. Just a few years later in 1967, her mother died as a result of an automobile accident in which she and her brother were also injured. As tragic as both accidents were, these losses had the effect of drawing Rosemary closer to her brother, sister-in-law, nieces, aunts, uncles, cousins and other family members.

After graduation from high school where she was the salutatorian, Rosemary worked for the W.T. Grant Company as a clerk and attended Central Michigan University. During these years, she also taught CCD at Sacred Heart Parish in Mt. Pleasant. Rosemary graduated from Central Michigan University earning a Bachelor of Science Degree in Education, with a major in Library Science and a minor in History. Her love for library work grew out of her desire to serve all people of whatever age, and she was very good at what she did in this arena. She was a determined researcher who never gave up on finding a source or checking a fact that needed verification.

Rosemary entered the Congregation August 25, 1968. At reception, she received the name Sister Rose Marie of St. Rose of Lima. She made her final vows on October 3, 1981.

Soon after entering the community, Sister Rose Marie began work at the Catholic Central Library in Muskegon and later in Gaylord. These assignments were followed by four years at Catholic Central High School in Grand Rapids. She earned a master’s degree in Library Science in 1977 and began a twenty-nine-year tenure at Aquinas College as the technical services director. She was a major player in the huge undertaking of converting the card catalog from analog to a digitized system. Conscientious and serious, Sister Rose Marie was appreciated by her co-workers for her dry sense of humor and thoughtful gestures.

In the early 1980s Sister Rose Marie began to experience the joint stiffness, pain and fatigue that signaled the onset of a serious case of rheumatoid arthritis. Surgeries for the relief of the symptoms and joint implants were endured with little complaint and remarkable patience. Sister Rose Marie was determined to remain as independent as possible for as long as possible, and that she did.

In 2007, however, Sister Rose Marie accepted the need to change to a part-time position and became the director of the Archives at Marywood. With her usual zest for project management, she upgraded the cataloging system with state-of-the-art software, saw to the completion of the Legacy Room, planned and saw to the completion of the renovation and expansion of the archives space at Marywood, and chaired the History Project Task Force toward the publication of the second volume of the story of the Grand Rapids Dominicans, Tapestry in Time: The Story of Dominican Sisters ~ Grand Rapids, Michigan 1966 – 2012.

Her skills at organizing and facilitating were recognized early on and she willingly accepted the role of member-at-large for the Michigan Unit of the Catholic Library Association in 1975. In 1979, Sister Rose Marie headed the Grand Rapids Diocesan Council of Religious.

Through the years Sister Rose Marie served as an Area Coordinator for the Congregation, as well as chairperson for the community library committee. She served for many years on the West Michigan Region Advisory Board of the Michigan Chapter of the Arthritis Foundation and on the Aquinas College Alumni Board.

Sister Rose Marie was the president (2011-2012) of the Archivists for Congregations of Women Religious (ACWR), a national organization. She was heavily involved in the planning and implementation of its 2012 Conference, which took place in New Orleans.

Sister Rose Marie’s hobbies of sewing and cross-stitch had to be abandoned with the progression of arthritis in her fingers, but her love for reading, music and theater continued despite increasing need for assistive devices to maintain mobility.

Sister Rose Marie was greatly appreciated for her keen intellect, her insightful observations, courage in speaking out and integrity in all that mattered. She found meaning in all things great and small. A reflection she wrote in 1995 reads in part:

Life is filled with great moments and ordinary moments; joyous moments and sorrowful ones. A significant part of my life and ministry has been spent in promulgating The WORD through service in the work of librarianship; providing resources for others to have the opportunity to read, to discuss, and act upon what they have found. In that process, perhaps they have improved their relationship with God and with others.

And so, you have, and so we have, and we are most grateful for your life and work among us.

Sister Rose Marie is survived by her brother Gerald (Judy) of Lawrence, MI; nieces, many friends and members of her Dominican community.

We commend Sister Rose Marie to your prayers.

Pray for the unemployed

After earning a master’s degree in Library Science in 1977, Sister Rose Marie began a twenty-nine-year tenure at Aquinas College as the technical services director. She was a major player in the huge undertaking of converting the card catalog from analog to a digitized system.

While touring the Marywood campus, third graders from St. Mary’s Catholic School ran into Sister Rose Marie Martin, who was happy to take a moment and describe her role of Archivist to the curious students.