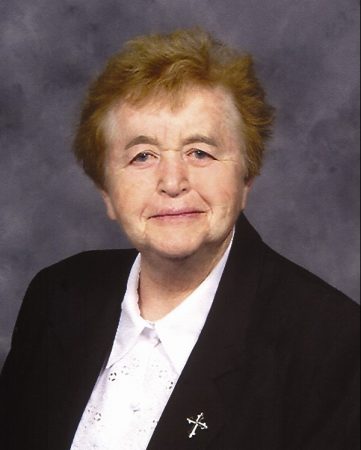 “She made the world a better place for having been here.” Most of us aspire to this goal, Roberta truly achieved it.

Roberta was born April 8, 1927, the third of nine children of Daniel Dominic and Pauline Edwards Hefferan, who had moved to Grand Rapids from a farm near Parnell and brought along a love of the earth. Music was another family value, with Dan an expert fiddler and Pauline playing the piano by ear. The “give and take” of living in a large family during the Depression prepared Roberta for a life of service.

Her grade school education was at St. Alphonsus School, where she had Grand Rapids Dominicans as teachers and Redemptorist priests as mentors. She attended Catholic Central High School and began working at a drug store soda fountain. After graduating, she worked for three years as a timekeeper for Applied Arts and for five years as secretary for St. Alphonsus Parish.
At 28, Roberta, deciding to give her “remaining few years” to God, entered as a postulant in June 1955. At reception, she took the name of Sister M. Thoma of Our Mother of Perpetual Help. During her novitiate under Sister Cecile, she spent much time as sacristan. After profession, she studied at Aquinas College and earned her B.A. with a major in sociology in 1959. Then, in one of Mother Victor’s sudden assignments, she spent two years in Washington, DC, where she received a master of social work degree from the Catholic University of America. Her thesis was a History of St. John’s Home.

Sister Roberta was a counselor for Catholic Social Services in Grand Rapids from January 1963 until December1976. Her responsibilities included child welfare, foster care, and adoptions. Her empathetic, non-judgmental, faith-filled encouragement earned the gratitude of many unwed mothers. During the last few years with CSS, she opened an outreach office in the gymnasium of St. Mary’s School. There she offered a cup of coffee and an open ear to the down-and-out drifters of nearby Bridge Street. In 1976, CSS discontinued the office for financial reasons. Sister Roberta remained until 1983 as a counselor for the charismatic Light of Christ Community, where she was a leader.

In 1984, Sister Roberta returned to her home parish, St. Alphonsus, as pastoral minister for Christian social concerns. She managed the food and clothing center, visited the sick, aided elderly parishioners with tax forms and applications for assistance in heating, and supervised the preparation of hundreds of Thanksgiving dinners and Christmas boxes. She joined the parish choir and sang the “Ave Maria” at many funerals.

“Sister Bert’s” services spread beyond the parish. She was an active member of the Creston Neighborhood Association, attended meetings at City Hall and helped in housing clean-up projects and neighborhood crime watch. She played a major role in obtaining grants to convert the former St. Alphonsus convent into Carrier Crest Apartments for low-income elderly residents and to create Catherine’s Health Care, which provides preventive health care services and information for residents in the Creston and Belknap neighborhoods.

In April 1997, Roberta received the Grand Rapids Jaycees’ “Unsung Hero Award” from former President Gerald R. Ford for her many community services. Other recognitions she received include the J.C. Penny Golden Rule Award, 17th Circuit Court Family Division Award for Outstanding Service to Youth, and a certificate from the Diocese of Grand Rapids Secretariat for Social Justice. She was a board member of the Creston Non-Profit Housing Corporation, the Home Repair Services of Kent County, and Our Hope rehabilitation group, for which she was secretary for 20 years. She collaborated with GRACE and ACCESS and the Grand Valley Blood Center.

Roberta was deeply prayerful and fully human. Her contagious laughter grew out of an enjoyment of simple things. She loved the outdoors, was an avid bird watcher, and used her green thumb in outdoor and indoor gardening. With a group of musicians led by her brother Larry, she played the fiddle at gatherings of family and friends and visits to retirement and nursing homes, including Marywood Health Center. With Janet Brown, she entertained during the community’s August Days. She was often seen driving a truck to pick up groceries from Gleaners or deliver furniture to a needy family — usually with a pet dog at her side. For vacations and retreats, she enjoyed travels to destinations such as New Mexico, New England, Louisiana, Florida, and Michigan’s Upper Peninsula. Across the Atlantic, she visited the Lands of Dominic, Medjugorje, and Ireland. To relax, Roberta was a sports aficionado and followed the Notre Dame and Detroit Lions football teams, as well as Detroit’s Tigers, Pistons and Red Wings.

Devoted to family and all things Irish, an inspiration to volunteer workers, she reminded others by word and example that we are all held in the hand of God. The celebration that St. Alphonsus Parish hosted for her Golden Jubilee drew extended family, friends and city and state government representatives to testify to her wide and lasting impact on others. When she retired in May 2009, the parish honored her at an evening concert and Sunday Mass and reception and provided her with a ticket for a rail trip to the West coast.

These words of an Irish blessing might have been written for Sister Roberta Hefferan, who has traveled many a road, been warmed by many a sun, and tended many a garden during a lifetime of service to others.

May the road always rise to meet you.
May the wind be always at your back.
May the sun shine warm upon your face,
The rains fall soft upon your fields,
And until we meet again,
May God hold you in the palm of His hand.

We commend Sister Roberta to your prayers.

Sister Bert with Goldie in 1988