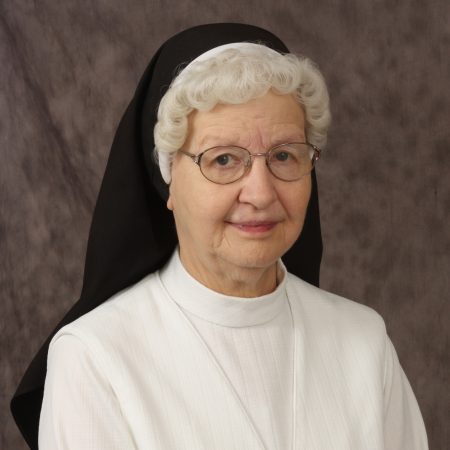 “My smile is an expression of gratitude . . . my hope to brighten life’s journey for those I meet along the way.”

Sister Reparata knew indeed that life holds both pain and joy. It was her desire to be one who reminded others of God’s abiding love and care for everyone, thus contributing to the joy of the world.

Ann Faubert was born November 18, 1930 in St. Charles, Michigan, the second child of Frank and Leona Faubert. She had two brothers, Raymond and Richard. Religion was important in her family, as were independence, responsibility, study, respect, and healthy sports interests. Piano lessons were very important too, and music became a life-long joy.

Ann’s education was at Holy Family School, Saginaw where she was taught by Grand Rapids Dominican Sisters. Working in the public library fostered her love for books, and she was an avid reader all her life. Responsibility as a baby sitter often opened an opportunity for a working vacation as she accompanied the family of the children for whom she cared to their lake house during the summer.

Eventually drawn to pastoral ministry in the hospital setting, Sister Reparata prepared for this new role through Clinical Pastoral Experience (CPE) at the University of Michigan Medical Center in Ann Arbor. She became a hospital chaplain at three hospitals in Flint, Michigan. Here she lived with Sister Constance Nizol, who, like herself, retained love for many of the earlier practices of religious life. The two Sisters also enjoyed their pets, including one dog and two cats.

Their ministry to patients and their families was extended to hospital staff members, many of whom began to see spiritual aspects of their own work. About her work as hospital chaplain she said: “I have the easiest job in the world. All I have to do is show up and God does the work.” After Sister Constance’s death in 2000, Sister Reparata continued in hospital ministry until illness necessitated a transition to Marywood in 2010.

Sister Reparata’s interests included reading, playing the piano and organ, listening to music, crocheting, ice skating, walking and spectator sports. Living and ministering on the east side of the state, she was a loyal fan of the Detroit Pistons, the Detroit Red Wings and of course, as she said, “the Detroit Tigers are always a concern!”

The Dominican emphases on Eucharist, Office, and the Rosary were important to Sister Reparata. Her golden jubilee reflection ended with these words: “Time has deepened the love and purpose in my life to realize Jesus’ promise: ‘If you do the will of My Father, we will come to you and make our abode with you.’ To finish the journey, I ask only a willing spirit of adoration and service.”

In her final years, Sister Reparata continued to be a positive and joyful person even as her mobility was impaired, and her activity circumscribed by physical limitations. She constantly expressed gratitude and appreciation for her life at both Aquinata Hall and Marywood Health Center, as well as for the care and concern of her Sisters, family and friends.

Sister Reparata is survived by her brother Richard Faubert of Fort Worth, TX; nieces, nephews, many friends, and members of her Dominican Sisters~Grand Rapids Community.

Entered eternal life on December 6, 2017 at the age of 87 after 68 years of religious life

We commend Sister Raparata to your prayers.

About her work as hospital chaplain Sr. Reparata said: “I have the easiest job in the world. All I have to do is show up and God does the work.”