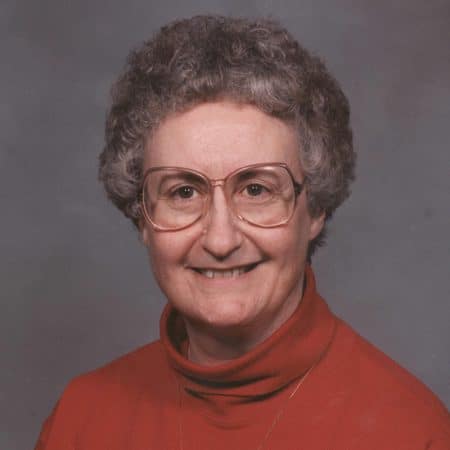 “Like the disciples on the way to Emmaus, I have met God on many roads and he has led me in many directions.” So wrote Sister Phyllis Ohren on the occasion of her Silver Jubilee in 1986.

On Trinity Sunday in this Year of Jubilee she met her God suddenly on the road which became her last stop on the way to eternity. Before that she had served God’s people zealously and joyfully through high school teaching, adult religious education, formation, congregational administration, and pastoral ministry and administration. She was a learner all her life – from formal study, from experiences, and from the people she served.

Phyllis was born June 1, 1942, the third of eight children of Carl and Mary Deutsch Ohren. Her father had come to the United States from Germany in his early twenties and worked on a farm near Grand Rapids for several years prior to meeting and marrying her mother and moving to Grand Rapids. Phyllis attended St. Francis Xavier School and Catholic Central High School. She earned her high school tuition by working as a babysitter, a clerk in a dime store, and a waitress.

At Catholic Central she first met the Dominican Sisters and was impressed by the spirit of joy and happiness she saw in their lives. She reflected, “So, when as a senior, I decided on what I felt was a call from God to enter religious life, I also decided to enter Marywood.” She entered the Community September 8, 1960 along with over 40 other young women. At reception she took the name Carl Mary of the Blessed Sacrament after her parents and kept it until resuming her baptismal name after Vatican II. While completing her formation in the Congregation she attended Aquinas College, receiving her BA in 1965.

Beginning in 1964 she taught high school for eight years in Carson City, Chesaning, Alpena, and Grand Rapids. “I found teaching high school students a rich and rewarding experience. Those young people taught me much about what it means to be a good person and a good teacher.” During the summers (1966-1970) she worked toward an MA in religious education, which she credited with deepening her faith life.

In 1971 Sisters Phyllis and Jarrett DeWyse spent five months at the University of Louvain, Belgium as part of a program of study for the Grand Rapids Diocese. “The experience of living in cultures different from my own, of coming to know my father’s relatives, of meeting people from all over the world, of struggling to communicate in the face of language barriers, of seeing places and things I had only known through books – all of these have enlarged my vision of the world and of my faith heritage.” While in Europe the two visited the convent of the Holy Cross in Ratisbon, to which the Congregation traces its origin.

Beginning in the fall of 1971 Sister Phyllis worked four years in the Religious Education Office of the Grand Rapids Diocese in the area of Adult Religious Education. These years awakened her mind and heart to the needs of adults in the Church. After a year in the Formation Developers Program at the Aquinas Institute of Theology in Dubuque, Iowa, she became director in the Congregation’s religious formation program for those in initial commitment. With her challenging, non-judgmental, gentle attitude she provided encouragement and a solid example of Dominican life.

At the General Chapter of 1980, Sister Phyllis was elected Vicaress and brought her gifts of insight and care into her role as Councilor for Apostolates. Pastoral ministry was her own next form of apostolate. For five years she served St. Bartholomew Parish, Newaygo. Then study again – this time at Catholic Theological Union in Chicago. In 1990 she began service to the Saginaw Diocese, first as pastoral associate at Holy Spirit Parish, Shields. In 1995, along with two other American Dominicans, she spent two weeks visiting former Communist countries as part of a project of the National Council of Catholic Bishops Office to Aid the Catholic Church in Central and Eastern Europe. They listened to heart-wrenching stories of how for 40 years religious were separated, closely monitored, and forbidden to teach, but managed to keep their spirit of joy, hope, and missionary zeal. The trip broadened her knowledge of other countries and cultures and deepened her appreciation of American freedom.

Sister Phyllis was known and loved for her deep spirituality, her understanding of people, and her ability to challenge others with insight and gentleness. She upheld the dignity of each person and could be passionate against anything that threatened it. Loyal to her friends, zealous and joyful in her ministry, she had a good sense of humor and an ability to enjoy life. Her hobbies and interests were reading, all kinds of music, walking, and vigorous swimming. Her strength and resilience are demonstrated by her recovery from an accident during her time in Newaygo. While tobogganing at a youth group’s winter outing, she was injured in a crash and suffered several broken bones. In spite of a prognosis that she would be paralyzed, she surprised everyone by a quick recovery and was soon back on the job wearing a neck brace to protect broken vertebrae.

The next crash ended differently. Sister Phyllis was just completing her first year as pastoral administrator at St. Paul the Apostle Parish, Ithaca with a mission at St. Martin de Porres, Perrinton when her life was cut short. She was en route to a parishioner’s open house when around 2:00 p.m. she was involved in an automobile accident on M57 and died within minutes. Stunned and saddened by the loss, we have the assurance that she will continue to challenge and inspire us. Phyllis now knows fully the experience of meeting and recognizing her God.

Sister Phyllis is by her sisters Beatrice and Michael Lynch of Casnovia, MI; Charlene and Peter Marsiglia of Portage, MI and Teresa McLaughlin of Seattle, WA.; her brothers Denis and Anne Ohren of Milford, OH; Joseph and Laura Ohren, Plymouth, MI; Michael and Carol Ohren of Grandville, MI and Peter and Kathy Ohren of Lansing, MI; many nieces, nephews and many friends.