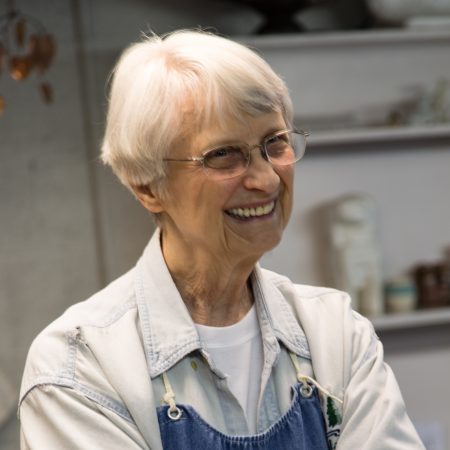 “For we are his handiwork, created in Christ Jesus for the good works that God has prepared in advance, that we should live in them.” Ephesians 2:10

This favorite scripture passage of Sister Phyllis Mrozinski applies to her personally as well as to her life as a creator of beautiful art works. Her handiwork, especially in her favored medium of clay, reflects a lifetime of dedication to God’s good works.

She was born in Bay City, Michigan on September 16, 1930 to Edwin and Martha Rytlewski Mrozinski, the third of six children. When she was an infant the family moved to Saginaw for her father’s employment. Her education began at St. Casimir School in Saginaw and continued at SS. Peter and Paul High School. During her senior year, she was Homecoming Queen. In high school she worked at St. Luke’s Hospital as a nurse’s aide and after graduation in 1948 she was employed as a telephone operator at Michigan Bell Telephone. In 1951 she turned down an offer to become supervisor of the business office to enter the Congregation eight days before her twenty-first birthday. Her sister Vicki had entered previously, and was a great source of information and inspiration. As a postulant, Phyllis was the oldest in a class of thirty. Recognizing her talent for art, Sister Leonora Gallagher exempted her from some domestic and garden duties to allow her time to make feast day and holiday cards as well as other art pieces. During this time she gained a love for prayer and “seeking first the kingdom of God.” On August 15, 1952, she entered the novitiate and received the name Sister Mary Fidelis of the Sacred Heart of Jesus. The following August she was professed. Her first mission assignment was at St. Joseph, East Tawas, where she taught grades 5-6 for four years. From there she went to St. Mary, Charlevoix; Holy Rosary Academy, Bay City; Marywood; St. Mary Magdalen, Melvindale; and St. Joseph the Worker, Beal City. While teaching, she took summer courses to complete her BA degree with a major in English. At that time Aquinas College did not have an art major, so she took art classes at Siena Heights (Adrian) and Cardinal Stritch (Milwaukee) colleges. In every school to which she was assigned she taught art and her students won many awards for their art work.

In 1968, Sister Fidelis resumed the use of her baptismal name. In 1974 Sister Phyllis was called to be director of eleven Sisters under final vows who were missioned in western Michigan. She was also guest-mistress at Marywood, artist in residence, and assistant with secretarial work in the central office. She enjoyed designing brochures, flyers, and holiday greeting cards. She continued taking classes in the evening and summers and earned an MA degree in religious studies in 1982. She also accompanied Sister Amata Fabbro on a trip to Israel. At the age of fifty-five, Sister Phyllis requested and received permission to study art at Aquinas College, which by then had a four-year BFA program. Her sculpture instructor, Ron Pederson, recognized her natural talent in sculpture and advised her to make that her major. In her third and fourth years, she was his assistant. Then she accepted a commission to sculpt a life-size image of St. Thomas Aquinas, which she completed in 1989. This beautiful sculpture graces the entry of the main Academic Building on the Aquinas College campus.

Shortly after receiving her BFA she accompanied Sister Marie Celeste Miller, an art historian at Aquinas, on a five-week tour of major museums in Italy, France, the Netherlands, and England. For several years, Sister Phyllis held a part-time secretarial position in the Art and Music Center at Aquinas. Between 1992 and 1994 she served as secretary in the Student Activities office. In 1992 she revisited Europe on the Lands of Dominic pilgrimage. In 1994 Sister Phyllis became a full-time artist in residence at Marywood. In her studio there she created art pieces in both stone and clay models for bronze casting. Some of these, including her sculpture of St. Dominic, can be viewed at Marywood and Dominican Center. She served for several years on the Grand Rapids Diocesan Liturgical Art and Environment Commission. She served in a leadership position in the Dominican Institute for the Arts and created the Fra Angelico Award for the organization. This award was presented to Sister Phyllis in 2006. Devoted to the Eucharist, Sr. Phyllis was committed to participating in daily Mass whenever possible. She also loved the Rosary, and her creative life was clearly informed by her spiritual depth. She described her artistic impetus as a “drive from the core of her being.” She remarked that “in transforming a piece of stone I also am transformed.” Her quiet, secluded studio in the basement of Marywood was for her a sacred, contemplative space where she could indeed participate in that great handiwork of God, as both the beloved creation and the humble, heartfelt creator of good works.

Sister Phyllis will be remembered for her prayerful life, her gentle demeanor, and her works of art which were both vibrant and clear; symbolic and abstract. In life, and now in her new life, she was, and is, truly God’s beautiful handiwork – as her favorite Scripture passage foretold.

Sr. Phyllis is survived by her sister Vicki (Duane) Balko; brother Chester (Susan) Mrozinski; and brother-in-law Alex Kryska all of Saginaw, MI; nieces and nephews, many friends and members of her Dominican community.

In 1994 Sister Phyllis became a full-time artist in residence at Marywood. In her studio there she created art pieces in both stone and clay models for bronze casting.

Sister Phyllis served in a leadership position in the Dominican Institute for the Arts and created the Fra Angelico Award for the organization. This award was presented to Sister Phyllis in 2006.

Sister Phyliis’ handiwork, especially in her favored medium of clay, reflects a lifetime of dedication to God’s good works.

Sister Phyllis will be remembered for her prayerful life, her gentle demeanor, and her works of art which were both vibrant and clear; symbolic and abstract.

Sister Phyllis created a bronze sculpture of Saint Dominic, which can now be found on the Marywood Campus.