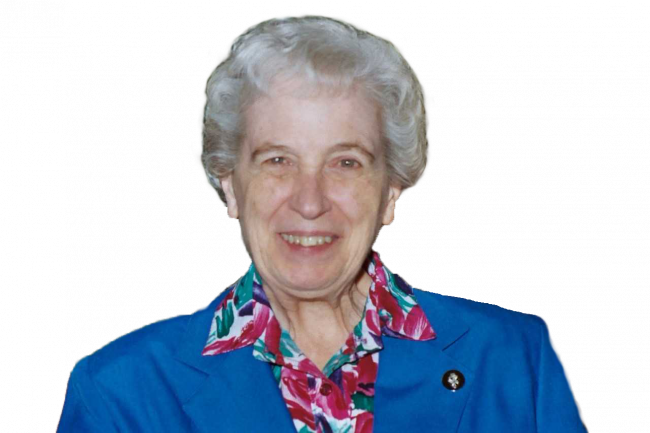 “The Lord is my Shepherd, I shall not want,” was a favorite Scripture passage of Sister Phyllis Brown. Her unfailing trust in God sustained her throughout her life in sickness and in health.

Phyllis Ann Brown was born in Grand Rapids on March 23, 1925, the oldest of four children of Peter Anthony Jr. and Edith Florence (Thome) Brown. Her grade school education began at St. Mary’s, Grand Rapids with the School Sisters of Notre Dame. She attended grades six through ten at Holy Trinity, Alpine with the Grand Rapids Dominicans and completed high school at Mt. Mercy Academy with the Sisters of Mercy. After high school graduation she worked three years, first as a clerk, and then as a long distance telephone operator.

On February 2, 1946, Phyllis entered the Dominican Sisters – Grand Rapids Congregation. She was received into the novitiate the following August and took the name Sister Norma as her religious name, which she retained until 1987 when she returned to her baptismal name.

In her early years as a Sister, she contracted a serious illness. Diagnosed with leukemia, she was told that she had only three months to live. Mother Euphrasia and Sister Norma’s own mother, Edith, called Fr. Solanus Casey, a Capuchin friar from Detroit, Michigan known for his miraculous intercessions on behalf of others. Fr. Solanus said, “In three months, the fever will break.” And it did. She was sent out to teach the following September and continued teaching for more than three decades.

Sister Phyllis taught in parish schools throughout Michigan. For twenty-seven of those years she also taught religious education classes both on Saturdays and after school for Catholic children attending the public schools. Her missions were St. Francis, Traverse City; St. Andrew, Grand Rapids; St. Joseph, Pewamo; St. Mary, Saginaw; Sacred Heart, Muskegon Heights; and finally St. Thomas and again St. Andrew in Grand Rapids where she retired from classroom teaching. She continued to tutor children and to serve as the librarian for St. Andrew. Coming to the Marywood Campus in 2000, Sister Phyllis provided secretarial services by working in the mailroom and as a filing clerk at Aquinata Hall.

Sister Phyllis earned her B.A. from Aquinas College. She also attended the Theological Institute at St. Norbert’s College, DePere, Wisconsin and took workshops at Mt. St. Joseph College, Cincinnati, Ohio and Viterbo College, LaCrosse, Wisconsin. She made the Congregation’s In Pilgrimage program in the summer of 1977. She participated in National Catholic Education Association Conferences and workshops for Justice and Peace. At Cardinal Stritch College in Milwaukee, Sister Phyllis honed her skills as a teacher of reading. The gratitude and respect expressed by both parents and children now grown, give testimony to her skills as a master teacher.

Sister Phyllis loved to travel. Trips included the Canadian Shrine Tour; Niagara Falls; Boston; Weston Priory in Stowe, Vermont; New Mexico and Hawaii. In her later years she enjoyed playing cards with Sisters and working on puzzles together. She never missed a chance to dance when she was young and later took every opportunity to join a square dance or polka.

In 1996, at the time of her Golden Jubilee, Sister Phyllis reflected on her favorite passage from Scripture. She wrote: “Fifty years of dedication to the Lord is hardly a speck of time compared with eternity. My Shepherd, however, has led me thus far, and for this I am grateful. For all the events of my life, the happy ones and the crosses; for restoring my health at a young age and leading me on, I say, ‘Thank you, Lord.’”

Sister Phyllis was known as a competent teacher of young children who cared deeply about her students’ success. As a community member she was appreciated for her wry humor and gentle kind manner of being with her Sisters. She will be missed by her family, including her sister, Sister Donna Brown, and her friends and Sisters in community.

Sister Phyllis and friends at her reception in 1946