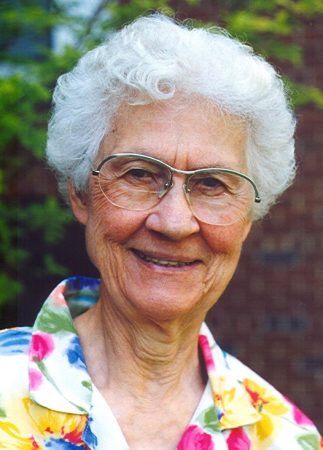 “I have loved you with an everlasting love. I have called you and you are mine. Thank you, dear God,” wrote Sister Paschal at the time of her Diamond Jubilee in 1994.

Sister Paschal loved life, her family, her community and all the beauty of God’s creation.

Marcella Catherine Barth was born to Casper Weimer and Emma Mary (Maag) Barth on August 22, 1915, the first of eight children–four boys and four girls. Little Marcella nearly despaired of having a sister when the next four births were brothers; but when she was ten years old her prayers were answered when her sister Anne Marie was born. The two were best friends every day from that moment on.

When Marcella was eight years old, the family moved to Grand Rapids where she attended St. Andrew’s School and Catholic Central. After tenth grade she came to Marywood as an aspirant, i.e., a high school girl who ‘aspired’ to enter the convent. She entered on September 8, 1933, receiving the name Sister Paschal of the Precious Blood. Sister Paschal was proud to be a member of the class known as “the lovely girls,” a reference used to describe this group by the then Prioress, Mother Eveline in one of her circular letters. It is now nearly eight decades later, and this class is still referred to as the “lovely girls.”

Sister Paschal spent 43 years in the classrooms of parish schools throughout Michigan and New Mexico, at times both as teacher and principal. She loved every day with her students in both elementary and junior high and they loved her in return. One such student later told her, “Do you know when I made up my mind to be a teacher? It was when you taught me in the fourth grade in Mount Pleasant.”

Sister Paschal was always up for adventure. The last time she completed the five-mile Labor Day walk over the Mackinaw Bridge was in 2002 when she was 87 years old. The first time she and her sister Anne braved the journey was 1979. Wherever she went Sister Paschal loved all animals and especially dogs. On her many trips camping in the West she thrilled to see buffalo, elk, moose and all God’s marvelous creation. She had a little dog of her own named Mitzy and in her latter years she grew very fond of the little white visiting dog named Casper who loved to ride on her walker as she tooled around the Marywood Health Center introducing him to all they met.

One of Sister Paschal’s favorite sayings was, “You can’t help getting older but you don’t have to get old.” Her active life of travel, camping, arts, crafts and reading contributed to her joyful spirit and healthy outlook on life. She especially enjoyed camping trips in the West with her sister Anne where she enjoyed the grandeur of mountains, lakes and streams.

She describes one of the highlights of her life as a trip to the Holy Land. She referred to this as a momentous experience, “It makes you feel like you are living a modern chapter in the Acts of the Apostles.”

Sometime after her final profession in 1939, Sister Paschal wrote, “I hope to spend many more years in this happy and beautiful life.” And so she did.

Sister Paschal is survived by her sister Anne and her brother Francis (Vi) of Grand Rapids; and her brother Edward (Eve) of Howell; nieces, nephews, many friends and a loving Community.

We commend Sister Paschal to your prayers.

Sister Paschal is pictured in the center with Sister Andrea Zahm to the left and Sister Pascal’s mother on the right. The photo was taken in 1959 in front of St. Francis in Traverse City, Michigan.

Sister Paschal “riding” one of the camel props from the Christmas program in the early 1960s.

Sister Paschal with the visiting dog Casper on Halloween in 2009 at the Marywood Health Center.