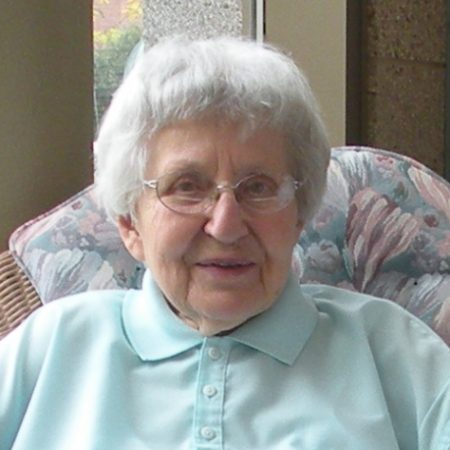 On October 14, 1925, Louis and Theresa (Popp) Schaub welcomed their second daughter, Ottilia Mary Margaret, into their home in Lake Leelanau, Michigan. She was baptized on October 18, 1925. Their first daughter was Theresa, who was two years older. During the next five years twin brothers, Louis and Francis, and another sister, Charlotte, were born to complete the family.

Ottilia, along with her sisters and brothers, attended St. Mary School in Lake Leelanau. She received her first Holy Communion on May 28, 1933 and was confirmed on November 24, 1938. She graduated from St. Mary High School in 1943. During the following year Ottilia was employed as a secretary by the Leelanau County Agricultural and Soil Conservation Service. She then enrolled at Aquinas College, defraying her educational expenses by working as a waitress in local restaurants and in the college cafeteria. She graduated in 1948 with a BA degree in Social Sciences.

After teaching a year at Fairview Public School in Grand Rapids, Ottilia discerned a religious vocation. It is not surprising that she chose to enter the Dominican Sisters of Grand Rapids since they were her teachers during all her school years. And, her father’s sister, Sister Ottilia, after whom she was named, and three of his cousins as well as three of her mother’s sisters were already members of the Congregation! Furthermore, her younger sister Charlotte was a novice at Marywood – so entering the Dominican Sisters ~ Grand Rapids congregation was not an idea new to the family when Ottilia decided to enter in 1949.

On May 30, 1950 she received the habit, retaining the name of her now deceased aunt, and made first profession on June 5, 1951. The next years were spent in teaching at St. Mary in Carson City, St. Alphonsus in Grand Rapids and then at St. Mary in Kingsley.

She pronounced final vows on August 15, 1954. Having in the meantime acquired a permanent secondary school teaching certificate, Sister Ottilia was assigned to teach in the Religion Department at Catholic Central High School, Grand Rapids, where she remained for fifteen years. She completed an MA degree in Religious Education at Aquinas College in 1959 and in 1969, a Masters in the Art of Teaching (MAT) degree at the Catholic University of America, majoring in Psychology and Counseling. In 1968, she began serving as Coordinator of Counseling and Advising at Aquinas College, a position she held for the next six years.

In 1977 Sister Ottilia joined the Voluntary Action Center of Grand Rapids where she served as an informational and referral specialist for senior citizens. For nearly three decades Sister Ottilia assisted people who were poor, and especially the aged of Grand Rapids, through her service with the Voluntary Action Center, United Way of Kent County, Heart of West Michigan United Way and Senior Neighbors. She acquired extensive knowledge of community resources and was deeply versed in the agencies that provided assistance for the elderly. In 1992, she was honored with the Service Provider of the Year Award from the Western Michigan Society of Gerontology for her service through United Way First Call for Help. The inscription on the plaque was most appropriate for Sister Ottilia: “Blessed is the influence of one true loving soul on another.”

In 1983, Sister Ottilia enjoyed a tour of Europe with a group of her Lake Leelanau neighbors, visiting sites in Belgium, Germany, Austria, Italy, Switzerland and France.

Volunteering and a sabbatical year preceded Sister Ottilia’s next ministry which was to serve on the Prayer and Listening Line at Marywood as well as support services wherever needed at Marywood. A lifelong learner, Sister Ottilia was determined to learn how to use computers, taking her first course in 2009.

Although not one to express her personal feelings or to expound on the spiritual life, Sister Ottilia desired to assist persons to a more fully human life by meeting their human needs. This she did with focus and commitment. She used her intelligence, kindness and organizational skills to serve all who came, without regard for extraneous conditions like ethnicity, religious affiliation or status of any kind or none at all.

Sister Ottilia loved to cook and play cards and she enjoyed many years of residence at the Aquinata Hall Annex with a variety of Sisters. She loved her family dearly and remained closely connected with the family “up north” and those nearer to Grand Rapids.

Sister Ottilia walked humbly in service of all persons. She loved without judgment and with a practical tenderness that was unfailing. She will be missed by all who knew and loved her.

We commend Sister Ottilia to your prayers.

Pray that state, national, and world leaders would work for common good