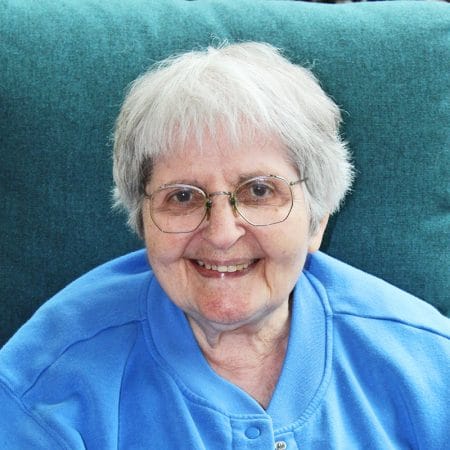 “I thank the dear Lord for the many blessings I have received during my 75 years as a Grand Rapids Dominican. My brother, Alex, (deceased) told my family that I wouldn’t last two months, and Here I am, Lord!”

I was born in Detroit, Michigan on December 20, 1924 the third of six children, four boys and two girls. My parents, Charles and Olga Mizzi, were both born on the island of Malta.

My early years in school, grades one to eight, I went to St. Dominic’s School in Detroit staffed by the Adrian Dominican Sisters. I went to St. Leo for High School. In 1945, I came to Marywood at the advice of a Dominican Priest at St. Dominic’s and that has made all the difference in my life.

As a Sister, I attended Aquinas College and was then assigned to St. John’s Home under the supervision of Sister Jane de Chantal. I worked there for a few years and then was sent to teach in schools throughout Michigan. For 29 years, I worked at St. Alphonsus School in Grand Rapids, teaching and tutoring. Shortly after this, I moved to Marywood where I continued ministry as a member of the Prayer and Listening Line, and I tutored in the Word~ESL Program.

Sr. Olga Mizzi’s joy of teaching is evident in this picture of her with some of her students.

After moving back to Marywood, Sr. Olga (second from the left) continued ministry as a member of the Prayer and Listening Line.