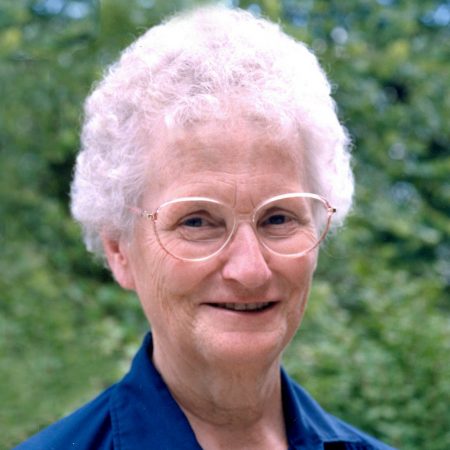 “This is what Yahweh asks of you, only this, to act justly, to love tenderly, and to walk humbly with your God” Micah 6:8

Sister Nancy Flumerfelt cited this text for her Golden Jubilee in 1999, and she added: “Probing what is, and striving for what ought to be, is a vision I have carried all my life in the struggle for social change.”

Nancy was born into a strongly Protestant family in Lake Orion, MI, September 6, 1925. Her mother, Leah, was an elementary school teacher, village treasurer, and owner of a gift shop. Her father, Hube, was self-employed in the dairy business. With Leah’s influence and drive this expanded into a dairy bar and restaurant. During WWII he was a purchaser for General Motors. Nancy had one younger brother, John. She attended the local public school through her junior year of high school and worked at the restaurant.

In her senior year Nancy transferred to Marywood where she became a convert to Catholicism. This did not please her family. Her college years at Siena Heights, where she was a social-science/sociology major, brought deeper probing into personhood and societal issues. One summer she worked in a defense factory and for three summers she was a counselor at St. Vincent de Paul charity camp on Lake Huron. After graduating in 1947, she spent a year as a family case worker for Detroit Catholic Charities. This experience deepened her desire for societal change. Torn between attractions to the Catholic Worker movement and religious life, she chose to join the Dominicans at Marywood – a choice she embraced wholeheartedly, but was not understood by her family.

At reception she took the name of Sister Joannes and the traditional Dominican habit. Both of these made her relations with her family, relatives, and hometown friends more awkward until after Vatican II at which time she returned to her baptismal name and chose to forgo the wearing of the habit.

After entering the congregation, Nancy taught at Girls’ Catholic Central, Grand Rapids. There she urged students to take an interest in the children at St. John’s Home, initiating programs between the two groups. Here too she organized the Young Christian Student Group. During summers she studied at Catholic University of America, Washington, DC, and earned an MA in sociology with a minor in Catholic social principles in 1957. She taught at Catholic Central, Muskegon, before becoming secondary principal at St. Francis High, Traverse City; SS. Peter & Paul, Saginaw; and Sacred Heart Academy, Mt. Pleasant. Her last position as a secondary teacher was at Bishop Borgess High, Detroit. Wherever she was stationed she welcomed opportunities to influence students and families in the principles of social justice.

Nancy earned a theology certificate from Aquinas and did post-graduate work in education and administration at Notre Dame, DePaul, Loyola, and Central Michigan universities. “Graduate schools affirmed my earlier directions ablaze with various movements, i.e., liberation theology, models of strategies for social change, simpler and simpler life styles, and concerns for human survival in a global village – all part of the process from a blueprint checker in a defense factory to a non-violent stance today.”

From 1974 to 1995 Sister Nancy taught in the sociology department at Aquinas College. Serving on the Campus Ministry Team for 13 years, she initiated the Student Social Action and Community Action Volunteer programs that still flourish. She was instrumental in the beginning stages of the Women’s Studies program and the Women’s Center.

Through membership in the National Assembly of Religious Women she formed bonds with “some of the finest women in the world.” She represented the Grand Rapids diocese at the bi-centennial Call to Action in Detroit. Another highlight for her was a 1979 Jamaica Case Study Seminar. “The reality of the so-called Third World exploitation learned there first hand continues to haunt me as I see this culture’s increasing split between the ‘haves’ and the ‘have-nots.’”

When Nancy retired from teaching in 1995 she took an inspirational sabbatical program, Barakah/Cathedral in New Hampshire – “a chance to explore the sacred within and without.” In her subsequent retirement she volunteered as the social justice contact at St. Andrew’s inner city, multi-cultural parish.

Nancy maintained good physical, psychological, and emotional health. Once during her years at Aquinas she fell from a ladder and broke her ankle but continued to teach from a wheel chair and in the summer joined a tour of Europe with the help of a brace and cane. Her outdoor hobbies included hiking, camping, bicycling, swimming, cross country skiing, tennis and gardening. Other interests were reading, music, challenging conversation, travel, politics, social justice movements, local and national protests, e.g., S.O.A., Ft. Benning, GA and the Peace Ribbon in Washington D.C.

Always outspoken, Nancy told things as they were. Her sharp ironic wit was a trademark. She enjoyed being in a group and was also good at one-on-one relationships. Her closeness to her family returned as they recognized her personal identity after Vatican II. Her mother came to a nursing home in Grand Rapids before her death. Nancy traveled frequently to Texas and later to Oklahoma to visit and help care for her brother and his wife in their illnesses.

“I have been blessed with challenging, visionary, spiritual mentors and loving companions on the journey,” she wrote, and she stimulated many others to join the journey.

Sister Nancy is survived by cousins, friends and Sisters in her Dominican Community.

We commend Sister Nancy to your prayers.

Protesting the Schools of the Americas in 1998

Celebrating with an Aquinas College graduate