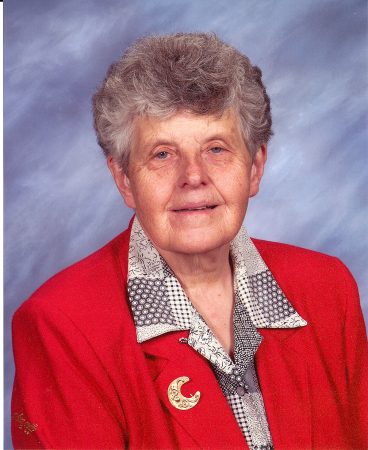 “The weave is wide, the weaver is narrow.
Here tightly, there lightly the weaver wends
Its way round and round, up and up.”
-Basket-Making 101

Mona entered the community on September 8, 1954 and in 1955 received the name Sister Mary Frederic of Our Lady of the Blessed Sacrament, later returning to her baptismal name. She made her final profession on August 15, 1959. In her 2011 poem Where I Come From, she wrote: “I came from home with a love of learning and a yearning for love. I came to a house of learning within and without its walls. I came with a ‘way with words’.”

After serving as assistant professor of history at Aquinas College, Sister Mona joined the ranks of the college administration as Assistant to the Academic Vice President in 1974. In this role she was a valuable member who planned commencements, served on numerous committees, facilitated the Awards program, the Ireland Overseas Program, the publication of the college catalog, and much more. Of her many talents, Sister Barbara Hansen wrote, “the list goes on and on of details and projects she handled with grace and brilliance.” Sister Barbara remarked that Mona always saw things in a new light, was a catalyst for many innovations, could synthesize and integrate materials to make new dreams possible. Through her gifted writing, often with witty, always enlightening touches, she made her mark, often in a behind the scenes role.

During her Aquinas College years, Sister Mona spent many semesters co-directing the Aquinas College Study Center in Tully Cross, County Galway, Ireland. Of her years there, William O’Neill, N.T. Trumera National School Mountrath, Co. Laois, Eire wrote in an evaluation: “I feel that Sister Mona deserves a paragraph all to herself. Irish people simply gasped in astonishment when the circling whispers conveyed the news, ‘She’s a real nun, you know.’ Here was art concealing art at its best. Sister’s tranquility, good humor and open-heartedness endeared her to all. I’d confidently wager that there is not a more humane, considerate and understanding nun in all of the fifty states today than Sister Mona Schwind!”

Although on her initial trip directing a study program in Ireland Sister Mona had determined to “steel her Teutonic soul against any blarney,” she was entirely smitten by the land, the people, the cadence of tides and sunrise, of language and song. She wrote, “Ireland has remained an enduring influence in my life: the colors, the roll of the hills, the sea, the seasons, some very dear Ireland friends, the cadence of the speech, the turn of phrase, the variety of crafts, the relation between material and mental culture, all the conundrums.”

That “turn of the phrase” so admired by Sister Mona was her particular gift to the community and to the world. For writing was her passion. It sustained her in good times and through the dry seasons of her life. Untold numbers of articles, speeches, summaries, and letters ghost-written by Sister Mona added clarity and spirit to the missives of administrators, prioresses, councilors and others through the years. Sister Mona also wrote and published poetry and two books: Period Pieces: An Account of the Grand Rapids Dominicans 1853 – 1966, in 1991, and In God’s Own Time, a history of St. Francis DeSales Parish in Muskegon, in 1997.

Her book Period Pieces along with the archival holdings organized so carefully continue to be sources of all things historical about the congregational story. Sister Mona was also instrumental in translating from the Latin, the rites and rituals of the congregation for the post Vatican II era. As well, her patient genius helped bring to completion the composition and final Vatican approval of the Constitution and Statutes which received approbation in 1990.

Sister Mona enjoyed gardening, travel and visiting friends. She doted on her cats, always named after Irish heroines or heroes. She loved a pretty flower, a well-set table, a hearty scone, a healthy laugh and a spot of Irish tea with good friends. Her words were soft and thoughtful. Her love was deep and faithful. A true historian, she walked hand-in-hand with the good memories of family and friends. In one of her last poems, she wrote: “I see now I have come from prose to poetry, from history to story, from courtesy to compassion.”

She once wrote: “I am at the age now when I can mark off a few periods in my life here and so would say for the first ten years it was “special people” – Adrian English, Sr. Cecile, Sr. Carola Jones, Sr. Gertrude Marie – some authors, Fr. McNabb, Jarrett, Gerald Vann. The most recent ten years had the blessing of extended stays in Ireland and those gave me the context for thinking about vocation, culture, and how to keep a peat fire going – metaphors in a way for the continuing questions of believing, thinking, doing.”

The final stage of her life, the integration of people and place, of bodily limitations and expansion of grace is found in her poetry. “I leave as my portfolio of love deep friendships here and beyond; dear, generous family, soul friends. I leave sister sisters whose company has enriched and delighted me–all my companions.”

Sister Mona is survived by her brothers Don (Margaret) Schwind of Beaverton, MI and Paul (Jean) Schwind of Cheboygan, MI; nieces and nephews, many friends and members of her Dominican community.

We commend Sister Mona to your prayers

Arranging an Irish Parlor Exhibit in 1995

A book of selected poems by Sister Mona Schwind was published posthumously. The poems within celebrate Ireland, friendship, and the journey of the spirit. Copies of the book are available for purchase in the Dominican Center Marywood Bookstore.