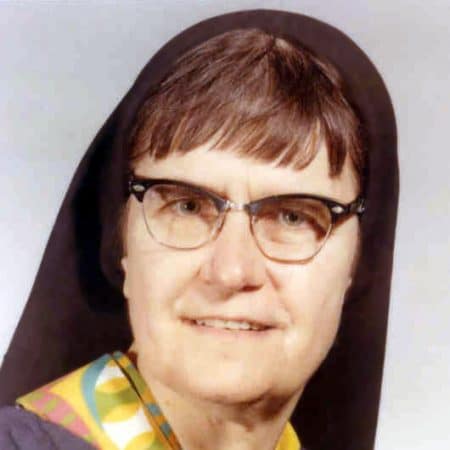 Jesus said, “Whoever wishes to be my follower must deny her very self, take up her cross each day, and follow in my step.” Luke 9:23

When Sister Mildred exchanged the suffering of this life for the glories of heaven, her long years of patiently carrying her heavy cross each day and following ever so closely in the footsteps of our Crucified Lord were at last over.

This faithful follower of the cross of Christ was born in Madison, Wisconsin on August 4, 1911. She was the second youngest of a family of four children born to Anna and William Adams. The other three children were boys. Sister Mildred, however, was not only to experience the love of her mother and father and these three brothers, she was fortunate to have nine brothers and sisters from a previous marriage of both her father and mother. There really was no distinction made in the membership of the thirteen children, and there was much love and concern for one another.

Sister Mildred was baptized in St. Patrick Church in Madison, Wisconsin on September 3, 19 11, and was given the name of Mildred Gertrude. When she was three years old, the family moved to Grand Rapids to a home close to St. Andrew Cathedral. Here it was that Mildred in 1918 received her First Holy Communion and was confirmed by the Most Rev. M. J. Gallagher.

Early in life Mildred was to experience her first sorrow. At six years of age she started St. Andrew School, and a year later her mother contracted tuberculosis and became a patient at Sunshine Hospital. For a year and a half Mildred made her home with a friend of the family, Mrs. Jannausch, and attended St. Mary School. It was at this time she began taking music lessons that were to enrich the rest of her life.

Her mother’s condition did not improve, and in order that she not endanger the health of her children, she remained a patient at Sunshine. At home, her father and the children made the best of things. Mildred finished her grade school at St. Andrew and continued her music lessons. Her mother died after she had completed the ninth grade at Catholic Central. She remained at Catholic Central for one more year. Her father thought Mildred should have more care, and he registered her at Mt. Mercy Academy as a boarder. Here she spent her last two years of high school. After graduation Mildred entered the Music Department of Grand Rapids Junior College.

In her autobiography Mildred stated that although she was a Catholic all her life, her religion was not a dominating element in her life; it was her religious teachers who exerted a significant influence, It was through them that she was attracted to the religious life. Having had the Grand Rapids Dominicans for most of her education, it was natural that when she chose a community, she chose them. She entered Marywood on September 8, 1931, after her two years at Grand Rapids Junior College.

Sister Jerome Smithers was Mildred’s novice mistress, and she was one of the large number of young women who chose the religious life at that time. On August 17, 1932, she was given the holy habit and the name of Sister Ann Estelle of the Sacred Heart of Mary. About a year ago, Sister returned to her baptismal name, Mildred. Her First Profession of Vows was made to Mother Eveline Mackey, August 21, 1934.

Immediately after making her First Profession of Vows, Sister Mildred embarked on an apostolate in the Catholic schools of Michigan and New Mexico that was to cover a period of forty-two years. Her early assignments were in high school where she taught music, religion, history, and English, but during most of her forty-two years, teaching music was her primary assignment.

Numerous were the pupils to whom she taught piano and violin; her talents also extended to choirs, glee clubs, choruses, classroom music, and band. In many places she was the church organist and often this necessitated her singing the Masses solo. She was gifted with a very strong, rich, and beautiful voice. She never forgot that St. Cecilia was the Patroness of Music and many of her recitals were on her Feast Day.

It was not only as a pianist and organist that Sister Mildred enriched her own life and that of others; in her early life she did a great deal of interpretive reading and acting. When the Theological Institute was opened in 1952, Sister Mildred was a student in the first class. Perhaps due in part to her rich musical training and giftedness, Sister Mildred had a strong love for the contemplative life. She was an avid reader and historical biography especially interested her. She enjoyed outings, a good game of cards, and scrabble. Being able to listen to classical music, especially during her years at Aquinata Hall, was a great solace and blessing for Sister Mildred.

When Sister Mildred was in her early fifties living her quiet, vivacious, holistic life, she began to experience what was to be diagnosed as Parkinson’s disease. This eventually greatly limited her movements and interfered with her speech. In the 1960s and in 1970, largely because of the untiring concern of her sister, Margaret Page, she was one of the first patients to undergo brain surgery and L-Dopa treatments. Both of these were of tremendous help, and because of them, she was able to continue her music ministry for more years than was originally thought possible.

Reluctantly in 1976, Sister Mildred had to forego the pleasure of teaching piano. She came to the House of Studies. Here with the help of a walker, she maintained her interest and participation in activities to a remarkable degree. In October 1981 Aquinata Hall became her residence. She needed total nursing care and required a wheelchair. Her presence at prayers and activities was edifying. Only the good Lord knew the total extent of all she so very patiently suffered and endured not only at Aquinata but throughout all the years of her crippling affliction. All her life as well as during her illness, Sister Mildred was always kind, charitable, and generous with those with whom she was associated.

When asked what her favorite saying was she responded, “If at first you don’t succeed, never stop for crying; all that’s great and good is done just by patient trying.” This so very well epitomizes Sister Mildred’s life. She never complained; hers was a life of patient endurance. She daily carried her cross and followed the suffering Christ.

Sister Mildred, may the good Lord who said, “I am the Way, the Truth, and the Life,” lead you to the blessed abode where you, who so closely followed the way of the Crucifixion, may now share in the glories of the Resurrected Life of Christ.

We commend Sister Mildred to your prayers.