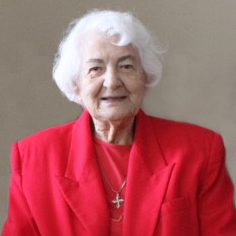 Born in Petoskey on May 22, 1927, Catherine was the oldest child of Michael and Bernadine (Hutta) Nic. Three brothers and a sister followed her into the family. Her father was born in Slovakia. Catherine was proud of her Slovakian heritage and longed to visit that land one day.

By the time Catherine was ready for first grade, the family had moved to Muskegon Heights where she attended public schools. She received religious instruction from Grand Rapids Dominicans at St. Mary’s, Muskegon where she began to feel drawn to religious life. As an aspirant at Marywood, Catherine finished high school. Summer vacations in her high school years brought work experiences as a clerk in the Five and Dime store one summer and as an assistant at Mercy Hospital in Muskegon during another.

In 1955, she was missioned to teach at Our Lady of Belen, New Mexico. In the Southwest, she was able to pursue the formal study of her favorite subject which was art. She completed her BA at St. Joseph College on the Rio Grande, Albuquerque with a major in art.

In 1967, she earned a certificate from Aquinas Institute of Theology and in 1974 an MA in the Teaching of Art from Western Michigan University.

After retiring from classroom teaching, Sister Michael Anne continued to serve in a variety of assignments including clerical work at Kent Community Hospital and Office Manager/Assistant for Development Projects for the Sisters of Providence at St. Mary of the Woods, Indiana. Returning to Grand Rapids, Sister served as a receptionist first at Marywood and then at Aquinas College. She also assisted with the library at Marywood for several years.

Sister was active in the Diocesan Council of Religious and a member of the National Association of Women Religious.

Her beautiful paintings of the natural beauty around her and her lovely calligraphy and handiwork grace our halls, and are cherished by family and friends. She loved drawing, painting, visiting art museums and galleries, sewing and reading. She once said, “Art stores and bookstores draw me like a magnet!”

Tall, quiet, and gentle by nature, she had a lilting laugh that was yet heard even as injury and illness necessitated an end to her independence and mobility. She accepted these limitations with remarkable equanimity, always grateful for visits and small gifts of maple fudge or other sweets.

Sister Michael Anne is surely enjoying the beauty of the greatest Artist of all as she is embraced by her loving God for eternity.

We commend Sister Michael Anne to your prayers.

Pray for the safety of homeless youth

From 1983-1986, Sister Michael Anne worked in the Communication Office for the Sisters of Providence in St. Mary’s of the Woods, Indiana. She assisted with their newsletter and coordinated their annual report and pictorial directory.

Sister Michael Anne paints a bowl during the Annual Day of Service in celebration of Catholic Sisters Week.

Sister Michael Anne Nic’s drawing of Holmdene Hall appeared on Aquinas College’s Christmas card one year; her work was selected by President Paul Nelson. She enjoys painting, and her works are just beautiful.

Tall, quiet, and gentle by nature, Sister Michael Anne had a lilting laugh that was yet heard even as injury and illness necessitated an end to her independence and mobility. She accepted these limitations with remarkable equanimity, always grateful for visits and small gifts of maple fudge or other sweets.