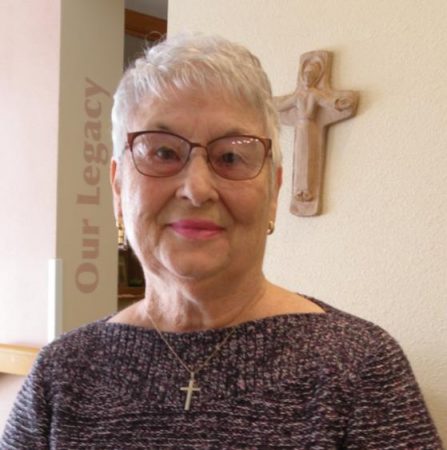 “Proclaim with me the Lord's greatness. Let us proclaim his name together.” -Psalm 34

This verse from Psalm 34 was a favorite of Sister Maureen Sheahan.

Catherine Ann Sheahan, born July 13, 1938, was the first child of Donald and Agnes (Grinzinger) Sheahan of Rosebush, Michigan. Two more girls and a boy followed, bringing the family to four children on the farm near Beal City, Michigan. Catherine’s early years of education were at the parish school known at that time as St. Philomena (now known as St. Joseph the Worker). During the first eight years, young Catherine was taught by Dominican Sisters. Her secondary education was at Beal City Public High School. As the eldest of four she gained experience and skill in food preparation and homemaking as well as skills needed on the family farm. She was active in the local 4-H Club.

After graduating from high school, Catherine entered the Dominican Congregation at Marywood in 1956 along with four other young women from Beal City. At reception she took the name of Sister Maureen of Our Lady of the Rosary. After profession she embarked on a life-long ministry in food service.

Sister Maureen received a certificate from the Dietary Association in 1977 and became certified in Food Service Management through Fontbonne College, Missouri in1979. Over the years she prepared meals for persons of all ages and walks of life. She served the Sisters in the Marywood infirmary and later the Motherhouse. She served her Sisters in missions at St. Joseph, Pewamo; Catholic Central, Grand Rapids; St. Joseph, Saginaw; St. Mary, Gaylord; Aquinas College, Grand Rapids; St. Anne, Alpena; and St. Stephen, Grand Rapids. After four years preparing meals for the seminarians at St. Joseph’s in Grand Rapids, she and Sister Ann Terrence Wieber accepted an offer to manage the food service department for St. Lawrence Seminary at Mt. Calvary in Wisconsin. It was quite an experience for both as they fed over 350 seminarians, brothers, and priests every day. It was a rural environment where the local people pasteurized their own milk and butchered the cows and pigs on an as-needed basis. They enjoyed their four years in Wisconsin.

Sister Maureen continued in the ministry of food service with Hospice, Head Start, and satellite food service support for Michigan Family Resources. After nearly fifty years of providing meals for people, Sister Maureen volunteered her skills and talents at St. Alphonsus Parish with those working to provide clothing, food, and services to the needy of that neighborhood.

Her classmates remember her as friendly and kind, conscientious in her commitments at work and home. They also recall that she was fun to be with and a willing companion for adventures in travel and new experiences. She was sensitive to people’s needs and responsive to anyone who was in need of special attention, a phone call, or just a friendly presence.

In her later years Sister Maureen assumed family ministry, helping care for her mother in a nursing home and continuing to volunteer where and when needed.

Her hobbies and interests included cooking, sewing, creative needlecraft, hiking and traveling. She toured the Holy Lands, made the Lands of Dominic Pilgrimage, and enjoyed a retreat at the Dominican Monastery in Fanjeaux, France. She and Sister Ann Terrence traveled to Ireland on a tour and later journeyed to Germany and Switzerland with Sister Ann Terrence’s two sisters, Chris and Eileen. A fond memory for Sisters Maureen and Ann Terrence was a thirty-day Greyhound bus trip from Grand Rapids to visit a relative in Arizona. They then travelled to Pennsylvania to visit another relative before returning to Grand Rapids. All along the way there and back they stopped to enjoy the scenery and see the sites available.

About one year ago Sister Maureen was diagnosed with leukemia. She continued to proclaim the Lord’s greatness through generous service, kindness, and a joyful spirit. Her goal to proclaim God’s name and goodness with loving companions has surely been fulfilled. She will be missed by all who knew and loved her.

We commend Sister Maureen to your prayers.

Pray for the elderly who live alone