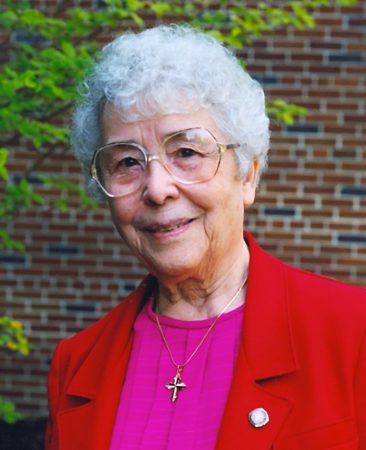 “To those who love God, all things work together unto good” or St. Thomas More’s version, “Whatever happens that cannot be helped, love it as if nothing could happen more happily.”

Those two quotations, favorites of Sister Marybride Ryan, express the confidence and inner resources with which she faced life and enjoyed it.

She was born Margaret Ryan on April 13, 1913 in Waterford, Ireland, two weeks after the death of her father. She lost her only brother in the flu epidemic of 1918. From her mother’s hard work and courage and from the strong support of her extended family, she gained an early love for community. Her call to the Grand Rapids community, however, came unexpectedly at the age of 16. The teacher in a geography class read a leaflet that had been left by recruiting Sisters Colette and Edith. “I doubt if I was listening closely because at that stage Americans did not interest me. After the interruption I returned to my reading, but I had covered only a few lines when I heard a distinct interior voice saying: ‘That is where I want you.’ It shocked me so that I sat bolt upright.” Within three days Margaret had consulted her confessor and written to the Sisters. A few months later she sailed from Cobh, in County Cork to begin a “full and fulfilling” life as a Marywood Dominican.

In 1932 she received the habit and the name of Mary Bride. (Later she combined the two into one word to encourage people to include the Mary.) To prepare for teaching she enrolled at Moose Jaw Normal School in Saskatchewan, Canada. For 15 years she taught high school at St. Henry’s in Melville, every subject including agriculture. Her first degree, from Ottawa University, was completed through correspondence, and her Master’s through summer sessions at Marquette University. After teaching three years at St. Joseph High, Muskegon, she went to Catholic University of America on a scholarship and earned her Ph.D. in English literature with a dissertation: John of Salisbury on the Arts of Language in the Trivium.

Sister Marybride began teaching at Aquinas College in September 1957 and was a scholarly stalwart of the English department for 30 years, sharing her love for Chaucer and other authors and encouraging student writers and future teachers. Her eloquence, even when speaking extemporaneously, her poems, articles and book reviews all demonstrated her own mastery of the art of language. She broadened her educational background by attending summer institutes at the University of Minnesota in 1962 and at St. Hilda’s College, Oxford in 1963. Her most venturesome academic undertaking was a semester as guest professor on Chapman College’s World Campus Afloat in 1970. This took her half way around the world in 102 days with stops at such places as London, Barcelona, Rome, Athens, Istanbul, Brazil, Trinidad, and Acapulco. In 1977 she taught in the Aquinas Irish program in Tully Cross. And she kept the Gaelic language alive for a group of Grand Rapids devotees.

After retiring from Aquinas in 1987 Sister Marybride moved to Albuquerque, New Mexico where she assisted in the Ministry Resource Center, among other things registering undocumented persons, teaching English as a second language at the University of New Mexico, and mulching a garden plot to coax vegetables to grow in arid soil. In 1993 she returned to Marywood and took on another new challenge as librarian in the community library. She continued her teaching by offering seminars at Emeritus College at Aquinas.

We remember the grace with which she danced the Irish jig, the confidence and assurance of her bearing, the conviction with which she spoke, the delightful trill of her laughter, her resilience and verve. Out of a deep prayer life she gained an inner calm that enabled her to look forward to the end, an end that quietly came as morning dawned on Monday, April 12, an end she named Homing.

There is a peace that comes at close of day
Muting of light, a coolness in the air,
A softening of the clamor and the blare
Of restless motion. Putting work away.
Steps are less hurried. Eyes have time to stray
To notice where a flower has bloomed, and where
A neighbor waits a friendly word to share,
And how familiar rooms invite our stay.
Will it be even so at close of life?
Shall I be glad to see light gently fade,
And feel with ease surcease of noise and strife,
Go peaceful toward the advancing shade?
Come home, and at the Father’s table sit
Finding the supper laid, the tapers lit?

For Sister Marybride we believe it was so, Alleluia!

Sister Marybride is survived by her nieces, nephews, friends and Sisters in her Dominican Community.

We commend Sister Marybride to your prayers

Sister Marybride boarding a canal boat in Amsterdam in 1970