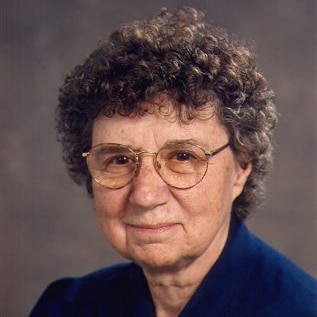 By the time Sister Mary Martens chose this for her Golden Jubilee message she had opened the gates of justice for many.

Mary Harriet Martens was born on a farm near Allegan, Michigan, January 20, 1925. Her parents, Charles and Harriet (Meyers) had married in Chicago and moved to Michigan—her father wanted to get back to a simple life style on the land and convert others to pacifism. She had no siblings. Her mother did most of the gardening and care of animals. She also sold eggs and vegetables in the town. When this income proved inadequate, she took on work in practical nursing. She and Mary lived with a family in Allegan and her father remained on the farm.

Mary’s mother moved to Grand Rapids and enrolled her daughter as a boarding student at Mount Mercy Academy. In her high school years, Mary was a day student and commuted by bus or bicycle. In 1941, at the age of 16, she graduated as valedictorian of her class. She enrolled in a secretarial program at Grand Rapids Junior (now Community) College. Finding the classes a repetition of what she had already taken, she left to work for a natural oil and gas company. Later she returned to Junior College and majored in mathematics, which she found more challenging. She was awarded a scholarship to the University of Michigan but instead she stayed home to care for her mother, who was near death after surgery for breast cancer. Her mother died February 12, 1947.

Mary then enrolled at Aquinas College to complete her education, graduating in 1950. In September she entered the Dominican congregation and was immediately assigned to teach at Grand Rapids Catholic Central. At reception, she took the name Sister Mary Alphonsus. After taking teacher education classes at Aquinas College, she returned to teach at Catholic Central. In subsequent years, Mary worked in the business office of Pioneers Memorial Hospital in Brawley, California, and taught in Catholic high schools in Alpena and Saginaw.
In 1959 Mary received a National Science Foundation Academic Year grant to the University of Notre Dame, earning a master’s degree in math. Following this, she was appointed to teach in the mathematics department at Aquinas College. She was hard working and enterprising, and taught classes at all levels. After four years, she studied at the University of Wisconsin in Madison and earned a Ph.D. in math. She taught at Aquinas for seven more years, becoming chairperson of the department, organizing a counter-cultural seminar for AICUM, and serving a term as chairperson of the Academic Assembly. In the summer of 1969, participating in a program called CHOICE, she taught at Albany State College in Georgia to enable teachers to continue their education.

In 1970-71 Mary received a Kellogg Fellowship for work on probability and statistics at Michigan State University. Back at Aquinas, she taught until 1975 and then spent a sabbatical year teaching at an experimental college at Grand Valley State University. From 1976 to 1980, Sister Mary served as director of finance for the Marywood Dominican Congregation. She enrolled members in the Social Security program, undertook actuarial studies, and helped set up a retirement fund.

Upon completion of this phase of her life, Mary enrolled in the school of law at St. Louis University and earned the J.D. degree. After interning in the State of Louisiana and learning the intricacies of the Napoleonic Code of Law, she began her legal career with services to the poor in Monroe and continued in Lafayette in the Acadian district. She became expert in providing legal counsel and defense to the poor and often illiterate. Many letters of gratitude for her generous and excellent work pay tribute to her skills and insights as a lawyer and a woman of compassion, especially for the poorest among us who could not ordinarily afford legal advice. She took well to Creole cuisine and culture, welcomed visitors, and gave many tours of plantations, gardens, and historic sites.

Declining health led Mary to resign from her legal position. She spent a sabbatical year at National Theological Union in Washington, DC and then returned to Marywood and later Aquinata Hall.

Her broad interests included reading novels, attending plays and movies and travel. Her brusque manner concealed a sensitive spirit and an eagerness to serve, even when incapacitated.

As her ability to communicate declined, Mary’s spirit of profound gratitude was in evidence as she repeatedly uttered, “Thank you,” to visitors and caretakers alike. And now we say “Thank you, Mary,” for your life and years of patient suffering as you awaited God’s call to come home.

Sister Mary was a Sophomore Adivisor and Mathematices teacher at Saints Peter and Paul, Saginaw in 1959

As an assistant professor of Mathematics at Aquinas College in 1967