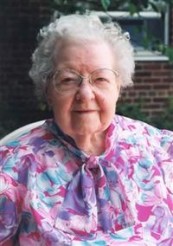 Truly Sister Leonard’s life was the epitome and exemplar of the richness of God’s own love and goodness. Hers was a beautiful and full life, which so wonderfully embodied the Dominican motto, “To give to others the fruits of our contemplation.” The lives of ever so many have been enriched by Sister Leonard, and the world is a better place because of a magnanimous woman.

It was on a farm in Dorr, Michigan in Allegan County on November 16, 1903 that Sister Leonard’s life began when she became the seventh of nine children born to Mary Leonard and Thomas Lynch. At her Baptism at St. Mary Church, New Salem on December 13, 1903 she received the name of Agnes Rose. Her First Holy Communion was at St. James Church, Grand Rapids where she was also confirmed by Bishop Michael J. Gallagher on May 14, 1916.

Her early education was in both public and Catholic schools. For grade nine, she attended Sacred Heart Academy on Ransom Street. Her sophomore year was spent at Nazareth Academy, Kalamazoo. Though her two Sisters had liked it there, Sacred Heart was where her heart was. She returned there and graduated in 1922. After attending Western State Normal the following summer, she spent the next year teaching an eight-grade District School in Allegan.

Life mingles its joys and sorrows, and Agnes’ first great sorrow was the loss of her dear mother when she was only five. Her father died a few short years later. Agnes, however, was not without love and care. Her father married her Mother’s sister and Grandma Leonard, too, played an important part in her life. There were temporary geographical moves during Agnes’ life. Each time it was to accommodate a sick relative, a death, or some business situation. The loving concern for others with which Agnes was gifted had their roots in her family heritage.

Of her vocation Sister Leonard wrote, “My Dominican vocation came to me as a call to a way of life I little understood and certainly did not expect to be mine. It demanded a ‘yes’ with which to begin and daily efforts to continue, sometimes joyfully and other times painfully, but always the ‘narrow road’ to eternal life.” Agnes’ “narrow road” as a Grand Rapids Dominican began when she entered the Community at Marywood on September 6, 1923. Here she had Sister Albertina Selhuber as her mistress during her novitiate years. On August 22, 1924 she received the habit and the name of Sister Leonard of the Holy Rosary. On August 24, 1926 she made her First Profession of Vows to Mother Benedicta O’Rourke. She made her Final Profession of Vows August 24, 1932 to Mother Euphrasia Sullivan.

The importance of education, especially religious education, and teaching were highly valued by Sister Leonard. She was to be involved in education for over fifty years. As a postulant she taught at St. Andrew School, Grand Rapids, and as second-year novice she was one of the four pioneer Sisters to open St. Stephen School, Grand Rapids. After five years, she was assigned to St. Mary, Saginaw for three years. In 1933 she was missioned to Marywood Academy where for the next thirty-three years she was involved in apostolic work.

How Sister Leonard accomplished all she did and at the same time remained a model of patience, gentleness, and calm was a source of edification. For thirteen of her thirty-three years at Marywood she not only taught kindergarten but also was in Community administration. During all this time, except the six years when she was both a Community Councilor and House Prioress, she taught a half-day at Sacred Heart College (later Aquinas College) in the sociology and education departments. With this heavy program, she was also deeply involved in catechetical work in the Grand Rapids Diocese. For twenty years she taught C.C.D. teachers in Grand Rapids and Holland, and for four years she commuted to Cascade, Gun Lake, Ada, and Sparta for C.C.D. work.

In 1966 she was assigned to be Superior and kindergarten teacher at Holy Rosary Academy, Bay City. Ten years later she was asked to be Administrator at the House of Studies, Grand Rapids where again she rendered extraordinary service to a very large group of Sisters. She was a teacher par excellence. Who of her privileged kindergartners could ever forget the dog Yed, the setting hen and baby chicks, the baby lambs, the rabbits, Rachel the dove, the aquariums, and the walks through the woods? Her philosophy was that the children learned gentleness and love from their association with nature.

Though education and teaching were very important to Sister Leonard, her first priority was always people. She made life happier, pleasanter, and richer for all with whom she was associated for she was a woman of deep understanding and compassion. Her ever-gracious ways, her ready smile, and her joviality attracted others. She was ever the perfect and thoughtful hostess. She had many friends.

In 1981 Sister Leonard asked to be relieved of administration so as to have more time for prayer. Marywood became her home, and she continued many of her interests: Visiting the sick at Aquinata Hall; working with the Marywood Alumnae and Dominican Laity; and her crafts and gardening. For a time she was also a member of the Pre-Retirement and Retirement Team.

In 1984 at the time of her Diamond Jubilee, Sister Leonard wrote, “My religious life has been a growing, changing experience of happy sharing with others. I am grateful for the many people I have met along the way and especially for my vocation and the joy of teaching.” We as a Community are grateful that Sister Leonard shared her life with us, and we treasure her rich and fruitful legacy. She was truly a woman of God who loved all God’s people. May she now share in Christ’s victory and enjoy the vision of God’s glory forever.

We commend Sister Mary Leonard to your prayers.