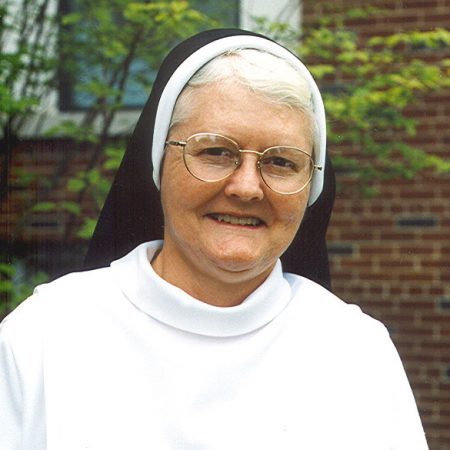 “I felt very close to God. Many times I’d walk home and feel his arms wrapped around me. I found out later he was just preparing me.”

Known well by only a few in the congregation during her life, Sister Mary Katharine Courtright lived through years of ill health beginning in infancy. When she was born, May 25, 1933, she weighed 3 pounds 9 ounces and was given emergency Baptism. For seven weeks she lost weight—unable to eat, the medical personnel at the hospital did not have much hope for her survival. Her mother took the baby home and for 24 hours a day held her and fed her with an eye dropper. “She and I slept between drops. It didn’t take long before I was all right.”

Barbara Katharine was the daughter of Dean and Hester Daugherty Courtright who lived in Crown Point, Indiana. She never enjoyed good health. At the age of three she was hospitalized with pneumonia. Her education began at Lew Wallace School in Gary, Indiana. When she was too ill to attend school, she was taught by teachers for the homebound.

Her religious education was minimal. When she was about 12, she walked with her sister Ann to religious instructions once a week. “I hated all of it and wouldn’t study.” When she received her First Communion, she changed completely. From that time on she never missed Communion on Sunday.

Barbara completed high school and attended the University of Michigan. She went through three “horrible years” torn between love of God and doubts and scrupulosity. She went daily to early Mass and Rosary. She attended weekly devotion to Our Lady of Perpetual Help. Although she knew almost nothing about doctrines and customs of the Church, she was disturbed by classes that she found agnostic, or anti-Catholic.

While at the university Barbara met Sister John Marie Bronersky and became interested in religious life. After graduation in 1956 she signed a two-year contract to teach at Aberdeen School in Grand Rapids. In fulfillment of a promise to Sister John Marie she visited Mother Victor at Marywood one weekend and decided to enter the congregation. In 1958 she entered as a postulant.

At reception Barbara took the name of Sister Thomas Mary, which she later relinquished in favor of Mary Katharine. Before being assigned to a mission she studied theology, metaphysics, psychology and history at Aquinas College to gain a Catholic perspective.

Then she began teaching. “The first time I stepped inside a Catholic school was to teach –immediately after receiving the black veil.” She taught in Saginaw, East Tawas, Grand Rapids, Beaver Island, Pewamo, New Mexico and Bay City. During this time she received her M.A. in religious education from Aquinas and another M. A. in Elementary Education from the University of West New Mexico.

Beginning in 1981 Sister Mary Katharine entered a new ministry – that of returning home to care for her mother who was nearly blind and in great physical pain. She was grateful for this family ministry which lasted more than nine years. In 1990 her own perennial bad health necessitated a move to Aquinata Hall. When able, she served as a chauffeur and worked part time in local ministries.

Mary Katharine enjoyed reading, especially history. She was grateful to her mother for her Irish heritage and her love of laughter. On her father’s side she was a Daughter of the American Revolution, tracing her ancestry back to Richard Warren and John Billington, who arrived on the Mayflower. Another source of pride was being a Hoosier, “born and raised in a small town in Indiana.”

A prayer composed by Sister Katharine in 1984 reads in part:

Lord, in your own way and time, use me to help others to love and trust you more. Let them see value in difficulty, in misfortune, in every manner of suffering whatever the cause. Let them remember, to those who love you, all things work to their good. Amen.

The journey of Barbara Katharine has been a difficult one; and yet to those who love, all things do work together for good. Our faith assures us that she now enjoys new life in the presence of the God she loved and served.

Sister Mary Katharine is survived by nieces, nephews, friends and Sisters in her Dominican Community.

We commend Sister Mary Katharine to your prayers.

Sister Mary Katharine on her reception day in 1959