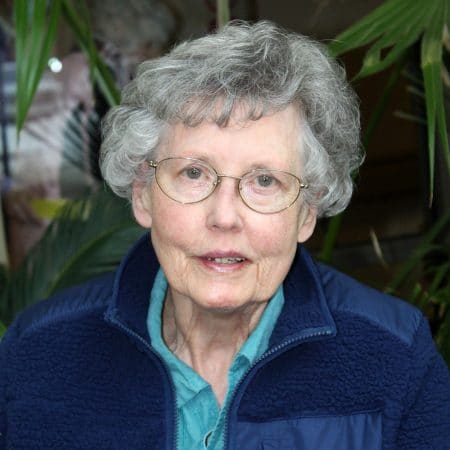 The oldest of seven children, Mary Ellen was born on January 22, 1941, and grew up on a farm in Alto, Michigan. Her early years of education were in a one-room schoolhouse in Harris Creek, a mile from her home. Secondary education was at Caledonia Public School. Her parents encouraged their children to go to college, and Mary Ellen chose Aquinas College at her mother’s suggestion. There she learned about the Dominican Order and its charism. The thought of being a Sister occurred to her in her sophomore year, and after some resistance to the idea, she entered the congregation in 1961, her senior year, graduating with a BA in sociology and a secondary teaching certificate. She half hoped that she would be sent home to pursue her earlier goal to get married. Such did not happen, and she soon felt she wanted to stay, eventually experiencing a strong call from God to live her Dominican life to the full.

After her novitiate year, she began a teaching career at St. Boniface in Bay City and then at Catholic Central in Grand Rapids. During the five summer months of those years she studied at St. Paul Seminary in Saginaw, completing an MA in religious studies in 1967. In 1969 she was assigned to the congregational formation team, a position she held until 1972. The next three years were spent teaching at St. Mary Cathedral High School in Saginaw. From there, she joined the co-pastors of the Cathedral for eight years to minister as part of a team, an experience she deeply appreciated.

Asked by the congregational leadership to attend a conference and training on social justice, Sr. Mary Ellen had an encounter with the liberation theologian, Gustavo Gutiérrez Merino, OP. It changed her life and gave her a deep understanding of and commitment to the poor and those treated unjustly.

Over the years, she was elected executive committee chair of the Saginaw Chapter of the National Assembly of Women Religious where she was noted for her interest in, knowledge of, and efforts in the promotion of peace and justice. She wrote: “we must develop our own consciousness on justice issues and help others in their awareness. But our efforts cannot be simply limited to charity . . . we must take the approach of systemic change to remove injustice.”

In 1977, Sr. Mary Ellen authored an article for the Catholic Weekly in which she summarized a conference on justice with these words: “If we believe in the Right to Life, then we must believe in the right to adequate food, shelter, health care, etc. for all people in order to maintain life. To accomplish this there will have to be changes in the economic structures and priorities in our country, state, and city. We will have to put people and their needs and services before things and profit.”

In 1986, Sr. Mary Ellen participated in a Faith and Resistance Retreat in Saginaw, subsequently engaging in an act of civil disobedience in front of an air base. She received a “ban and bar” letter as a consequence of her action.

Recognizing her competence and the quality of her work, Bishop Untener asked her to consider becoming a pastoral administrator – doing everything in the parish except those sacramental duties reserved for ordained priests. In 1983 – 84 she pursued theological and scriptural studies at Catholic Theological Union in Chicago, preparing for the pastoral and administrative roles she would hold for the next twenty years – three years at SS. Peter and Paul’s, Saginaw and then in parishes in rural Michigan where there were no resident priests. These include St. Felix Parish, Pinnebog; St. Henry, Rosebush/St. Charles, Leaton; St. Philip Neri, Coleman/St. Anne, Edenville. In these places she was known for her wonderful preaching and care for the sick. She often visited hospitals and homes. Wherever she went she built up small struggling parishes and was esteemed and loved by the people. She, in turn, was energized by the work – even as she coped with the dual diagnoses of Multiple Sclerosis and Parkinson’s Disease. Of these conditions, she seldom spoke and never complained.

Other roles in leadership include Vicariate Council in Saginaw, St. Vincent DePaul Store Board, Diocesan Pastoral Council representative, Chairperson of the Saginaw Eastside Ecumenical Group, Neighborhood Housing Board, Aquinas College Board of Trustees, and a member of the Unification Committee of Saginaw Against Racism. In addition, Sr. Mary Ellen was recognized as a leader who called forth, developed and supported participation of parishioners for parish councils, RENEW, Hispanic and English lay ministers, Christian service, and education – including R.C.I.A.

In 2011, Sr. Mary Ellen was asked to initiate and develop the ministry of Pastoral Care on the Marywood Campus. She trained and supervised spiritual care companions for the Marywood Home Health Collaboration with Porter Hills.

At the time of her 60th Jubilee, she wrote: “Dominican life [has] helped me grow as a total person. There have been ‘good’ years and ‘not so good’ years in any life. Through the request of community leadership, I experienced training in how to work for systemic change for justice and peace. It opened up a greater vision of life and the world and presented tremendous challenges. Community life has always called me forth rather than settling for the status quo. Left by myself, this might not have happened. I am grateful.”

Her classmates remember her as a competent and professional woman who loved her ministry and cherished time visiting the sick, reflecting on Scripture, and preaching for which she was extraordinarily gifted. She is described as a sincere person, quiet yet strong in her convictions. She was a natural leader but did not seek roles of prestige. Willing and able to lead, she was also content to yield to others in authority – if it did not compromise her convictions.

Sr. Mary Ellen was selfless in her care for others; she lived simply and had few possessions. She loved people, good conversations, shared meals, and time with others. Sr. Mary Ellen continued to inspire, counsel, teach and preach to the end of her days. She courageously and calmly predicted – “I may not be here tomorrow,” and then this loving, kind, justice-seeking Sister walked humbly with God into eternity.

We commend Sister Mary Ellen to your prayers.

Pray for justice for women, especially in the church