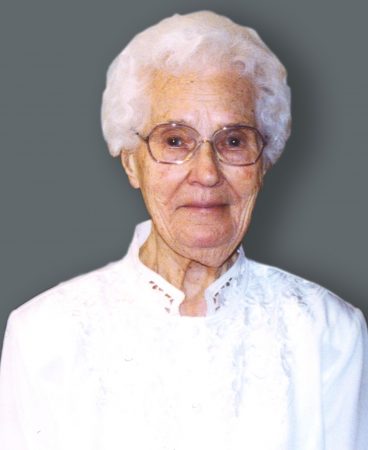 “Keep me, O Lord, as the apple of your eye; shelter me under the shadow of your wings” Psalm 17:8

Sister Mary Conrad had the privilege and joy of doing much traveling, and she never seemed to tire of visiting and seeing new countries, places, and people. And now that her earthly pilgrimage has terminated, she has reached her final destination – the incomparable place of beauty and joy – heaven itself.

Her earthly pilgrimage began at West Branch, Michigan on November 18, 1906, when she became the eighth child of a family of seven girls and six boys. Her parents, Joseph and Agnes Artman, were staunch Catholics. At her Baptism, about a week after her birth at St. Joseph Parish, she was given the name of Agatha Louise. Sister Conrad had wonderful parents, and she recalled that they were strict but loving. The praying of the family Rosary during Lent under her mother’s guidance held a special memory for Sister Conrad. Memorable, too, was the joy of her First Holy Communion which she made with her sister Gertrude, who was only two years older than herself.

At the age of seven her education began at the public school which she attended for four years until St. Joseph School was built. Then her education was entrusted to our Sisters with whom she had a very close relationship. After graduation she knew she wanted to become a religious, and she chose to join the Marywood Dominican Sisters. Her sister Gertrude (Sister Agatha) had already entered. It was on September 8, 1925 that she became a postulant with Sister Loyola Finn as her mistress. On August 24, 1926 she was clothed in St. Dominic’s white habit and became known as Sister Mary Conrad of the Five Wounds. Mother Benedicta O’Rourke was then the Prioress General. By the time she made her First Profession of Vows on August 28, 1928, Sister Jerome Smithers was the novice mistress and Mother Eveline Mackey the Prioress General.

For over fifty years Sister Mary Conrad’s apostolate was that of Catholic education. She taught from the first grade through high school, with the majority of her teaching years on the high school level with business education as her specialty. Her apostolic labors took her to the following places: Our Lady of Sorrows, Grand Rapids; Marywood Academy; St. Joseph, Bay City; St. Mary Magdalen, Melvindale; St. John, Essexville; St. Mary and Catholic Central, Muskegon; St. Joseph and SS. Peter and Paul, Saginaw; Catholic Central, Alpena; and Bishop Borgess, Detroit. Undoubtedly one of Sister Mary Conrad’s unique privileges was to have been one of the Sisters who in 1929 went to Collegeville, Minnesota and collaborated with Dom Virgil Michel in writing the With Mother Church texts.

Some of these assignments encompassed far more than just a day in the classroom. At Marywood when she had the Aspirants, she also had a full school program, and for six years, along with her high school teaching, she was mistress of boarders. For two of her years at Marywood, Sister was Mistress of Postulants. On the missions, too, there were always the extra curricular activities such as altar boys and teaching religion on Saturdays. Likewise there were some “firsts”: When Muskegon Catholic Central High School opened in 1953 she was a member of the faculty which was comprised of different religious communities – an arrangement quite new at that time. At Bishop Borgess in Detroit, it was not only intercommunity teaching but intercommunity living as well.

In addition to the above assignments, Sister Mary Conrad had some interesting variations. For two years she assisted in the dietary department at Aquinata Hall. After she discontinued teaching at Bishop Borgess, she remained in residence there. For four years she worked at St. Patrick Senior Citizen Community in downtown Detroit where her work was varied and her love for the many that came there was reciprocated. At least three people joined the Catholic Church because of her concern and interest in them. Her long desire to see the Southwest and live there was realized in 1986. In 1988 Sister Mary Conrad’s residence became Marywood, and how appropriate it was that she was asked to be the Marywood Guest Hostess as once again she had ample opportunity to exercise her hospitality charisma for caring and making people feel at home. In the Spring of 1999, although she was not ill, she made this request, “I may die suddenly, and in my obituary I want to ask pardon of anyone whom I have hurt.”

Sister Mary Conrad had many hobbies. Her love for gardening almost surpassed that of her love for traveling. From the time Aquinata Hall was built in 1967, she never missed a summer giving volunteer service working in the patio garden. After she became a Marywood resident she was able to spend more time in the gardens. She was always interested in people, and she was very close to and interested in her family and the Sisters at Aquinata Hall; some of her pupils corresponded with her and kept in touch with her. Then, too, she enjoyed making candles and she never lost her interest in baseball. How she loved a brisk walk! She is remembered, too, for shoveling a much needed path through the snow so that the Sisters could get to their cars or to school. The Muskegon annalist for 1958-59 recorded 119 inches of snow! What a challenge this must have been for Sister Mary Conrad. She was always a hard working person, and if “cleanliness is next to godliness” she must have attained that category without question.

Sister Conrad had a great love and prayerful concern for Our Holy Father, the Church, and our Community. The core of her never ending charity was her deep prayer life which was never ostentatious. In a recent brief biography she wrote, “God has been good to me.” And now we rejoice that she has attained her final goal and is experiencing what St. Paul so aptly described: “Eye has not seen, ear has not heard, nor has it so much as dawned on us what God has prepared for those who love God” (1 Cor. 2:9).

Sister Mary Conrad is survived by her sister and brother-in-law, Florence (Jack) Sargent of Pinellas Park, FL; nieces, nephews, many friends and a loving Community. She was preceded in death by her sister, Sister Agatha Artman, OP.

Entered eternal life on November 5, 2005 at the age of 98 after 79 years of religious life

We commend Sister Mary Conrad to your prayers.