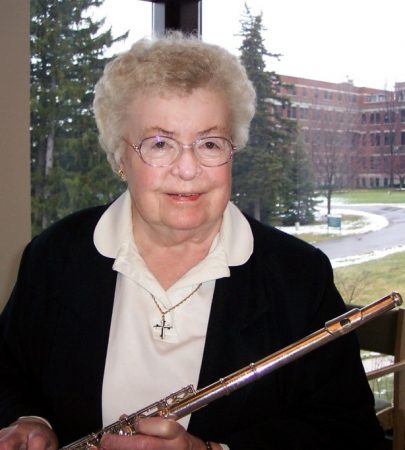 A lifelong student, Sister Mary Catherine was grateful to the Congregation for many opportunities for spiritual growth, especially for In-Pilgrimage, Parable retreats, and conferences.

Mary Catherine Brechting entered the world on April 30, 1929, the first of five children for Frank and Mary Rose (Henze) Brechting. The family lived on Alpine Avenue near Six Mile Road in Comstock Park and attended Holy Trinity Church. Her father, Frank, was a mail carrier. He had a strong faith in God and insisted his children receive a good education. Mary Catherine’s mother, Mary Rose, played the flute and gave lessons to Mary Catherine when she was in grades 8-10 so she would not have to “catch up” when she attended Catholic Central in grades 11 and 12. All five children were given the opportunity to take piano lessons, and Mary Catherine took on music as a life-long endeavor.

The family had a few acres of land, not a huge farm, but enough space to grow fruit and vegetables for the family. They lived across the street from their maternal grandmother, Mary Henze, who had experienced a number of strokes, making everyday chores difficult for her. Mary Catherine cared for her grandmother in the late afternoons and evenings after returning from her days at school.

Mary Catherine’s formal education began and continued with the Grand Rapids Dominican Sisters, first at Holy Trinity School through the tenth grade; and then commuting in various ways to Grand Rapids for eleventh and twelfth grades at Catholic Central. There, as a member of the high school band, she was delighted to be able to get into football games free of charge.

After graduating from Catholic Central in 1946, she studied for two years at Aquinas College before entering the community in September of 1948 following in the footsteps of her aunts: Sisters Matilda, Mary Caspar and Irene Therese Henze. At reception, she received the name Sister Mary Casper of the Infant Jesus, later returning to her baptismal name.

Mathematics and music were interests that colored the life of Sister Mary Catherine. She received her B.A. in 1950 from Aquinas College with a major in music and a minor in mathematics. She went on to study at the University of Notre Dame during the summers where she earned her Master of Science in Mathematics.

Teaching assignments for Sister Mary Catherine began in 1950 at Holy Rosary Academy in Bay City and continued at Holy Family, Saginaw; Our Lady of Perpetual Help, Chesaning; St. Joseph, Wright; and St. Francis, Traverse City. A more lengthy assignment followed from 1962 to 1973, when she taught math at Catholic Central in Grand Rapids. She then served on the faculty of Aquinas College from 1975 through 2005 when she retired from Aquinas’ Department of Mathematics.

In 1973 Sister Mary Catherine was awarded a fellowship at Western Michigan University, and in 1975 she received from that University a Specialist in Arts and Mathematics Certificate. At this time, computer science was in its initial phase. She received National Science Foundation grants to study computer programming at the University of Oklahoma, Drew University in New Jersey and Calvin College.

Sister Mary Catherine, together with Aquinas colleague Thomas Dooley, initiated a computer cognate that grew into a major in Computer Information Systems. Foreseeing the importance of computer literacy, the two offered juniors and seniors at Catholic Central and West Catholic high schools the opportunity to enroll in classes at Aquinas College.

During her teaching years, Sister Mary Catherine worked two summers at Old Kent Bank as a computer programmer and also served as the programmer who generated various reports for the Congregation’s Office of Research, which was headed by Sister James Rau.

Although immersed in mathematics and computer programming, she did not abandon her love of music. In high school, she received a diploma in piano, and she taught music in her early years in education. She became a member of the Aquinas College flute trio and played at Dominican Chapel/Marywood during Sunday Eucharist and at many funerals. For seven years, she was a member of the West Michigan Flute Association.

One of the high points in her life was an Alaskan cruise taken in July of 2000 to celebrate her 50th Jubilee. This three-week Alaskan adventure was shared with Sisters Katrina Hartman, Dolorita Martinez and Phyllis Mrozinski. Scenic wonders and activities were on the agenda for the cruise. They panned for gold, visited the Chena Indian Village and took a scenic cruise through Glacier Bay National Park and College Fjord. Mary Catherine remembered the beautiful scenery of the land and mountains with gratitude; she considered Denali National Park as spectacular and thought July was the perfect time of year to see Alaska in all its glory.

Sister Mary Catherine is survived by her sisters: Florentine Flowers of Comstock Park, MI; Lenore (Norman) Pelak of Baldwin, MI and her brother: Frank J. Brechting, Jr. of Spring Lake, MI; nieces and nephews, many friends and members of her Dominican community.

We commend Sister Mary Catherine to your prayers.

Working at a computer sometime after 1973.